Britain’s biggest shopping centre-owner has put administrators on standby as it enters a crucial fortnight that will determine whether it emerges from the COVID-19 pandemic intact.

Sky News has learnt that Intu Properties, which directly employs more than 2,000 people, is lining up KPMG to handle an insolvency process if lenders refuse to grant a standstill on its vast debt obligations.

The development, which is understood to have been agreed in the last few days as Intu’s board accelerates its contingency planning, underlines the parlous state of the company behind Manchester’s Trafford Centre, the Metrocentre in Gateshead and Lakeside in Essex. 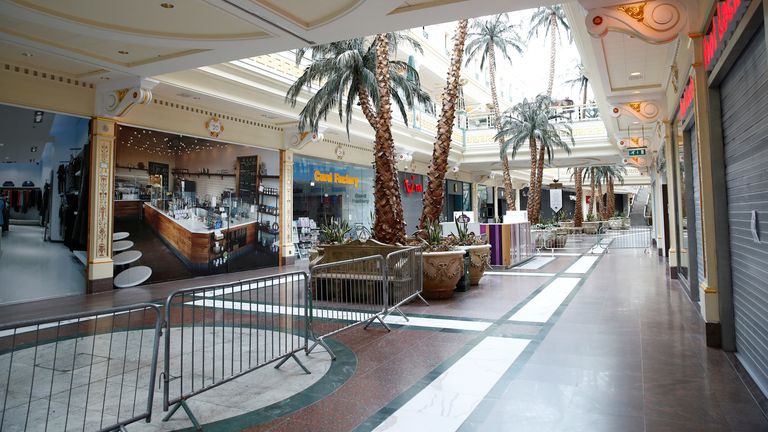 Sources said this weekend that the fate of struggling Intu remained in the balance, although people close to the company expressed “cautious optimism” that its banks would agree to step back from the brink.

The company, which is run by Matthew Roberts, has requested an 18-month standstill that would grant it relief from covenant tests and payments on debt facility maturities.

Without lenders’ agreement, a waiver that expires on June 26 would almost certainly trigger the company’s collapse into administration. One banking source warned this weekend, however, that Intu could be declared insolvent within a fortnight if it fails to make sufficient progress in the negotiations with lenders.

That would trigger one of the most complex administrations seen in Britain’s property industry for years – and spark fears for a wider commercial real estate sector which has been ravaged by the coronavirus crisis.

Intu has a complex corporate structure, with its 20 shopping centre assets owned by separate special purpose vehicles against which the listed parent company borrows money to fund its operations.

The company has about £4.5bn of debt, but a market capitalisation at Friday’s closing share price of barely £126m.

It is one of the London stock market’s worst performers, with its shares down almost 90% during the last year.

The company is an important player in some of the UK’s largest regional economies, employing nearly 3,000 people directly – but with a further 102,000 people working in its 17 UK shopping centres.

This week, Intu published figures showing that a standstill agreement would leave it with enough cash to continue operating, even after a calamitous rent quarter day in March, when it received less than a third of the money it was owed by retail tenants.

The COVID-19 pandemic has prompted a vast chunk of Britain’s retail industry to withhold rent payments, with names such as Sir Philip Green’s Arcadia Group, Boots The Chemist, New Look and McDonald’s choosing not to pay landlords.

June’s quarter day, in just over a fortnight, could be even bloodier for the balance sheets of retail landlords like Intu and Hammerson, which owns big shopping centres in Birmingham and Brent Cross.

In recent months, bondholders within the various Intu SPVs have appointed advisers to represent their interests as a full-scale financial restructuring has become inevitable.

Even if the listed parent company is forced to appoint administrators, the implications for its individual assets are far from clear.

People close to the company believe its lending syndicate is likely to demur from forcing it into insolvency because of the potential value destruction that would occur.

Securing alternative managers of large shopping centres as the retail sector attempts to recover from COVID-19 would be an uncertain process, according to insiders.

It is unclear whether an alternative asset manager with Intu’s expertise or negotiating power would be available.

Intu’s fall from grace has been startling.

It was a constituent of the London stock market’s FTSE-250 index until last year.

Tags: centre, Coronavirus, G, Shopping
You may also like
Recent News:
This website uses cookies to improve your user experience and to provide you with advertisements that are relevant to your interests. By continuing to browse the site you are agreeing to our use of cookies.Ok