WASHINGTON — As top Democrats continued to push a $1.9 trillion economic aid package through the House, some lawmakers and aides to President Biden raised the prospect of borrowing even more money to finance the president’s next set of spending plans, on infrastructure, buoyed by new projections that showed the nation’s fiscal picture was not as dire as officials feared in the fall.

On Thursday, the nonpartisan Congressional Budget Office released updated forecasts that showed a $2.3 trillion deficit for the 2021 fiscal year, an amount lower than last year’s $3 trillion deficit but still the second highest since World War II. While that projection did not include Mr. Biden’s stimulus proposal, Democrats viewed the report as giving them room to borrow more money given that it projected a rosier longer-run economic picture than last fall.

The anticipated economic improvement flows from an economy that is recovering faster than officials previously expected, thanks to the ability of American businesses to adapt to the coronavirus pandemic and trillions in economic aid that lawmakers approved last year, including $900 billion in December. The budget office estimated that a quicker rebound from the depths of recession would bring in more tax revenues and increase the overall amount of goods and services churned out by the American economy, compared with its earlier forecasts.

Mr. Biden and his party want to borrow trillions more this year in hopes of arresting the pandemic more quickly and fueling an even stronger surge of economic growth. A bill based on the president’s $1.9 trillion plan to expand food stamps and unemployment benefits, send $1,400 per-person payments to most American households and accelerate vaccine deployment and testing for the virus advanced in several House committees this week, with party leaders aiming for a floor vote by the end of the month.

The president, eager to keep his policy agenda moving, also met with key senators from both parties at the White House on Thursday morning to discuss the sweeping infrastructure bill that he plans to propose after the virus aid is approved. Mr. Biden promised in his campaign that such a bill, which could cost trillions of dollars, could be paid for by raising taxes on corporations and high earners, moves that would most likely doom any chance of getting widespread Republican support for the measure.

In recent days, Biden administration officials and a top congressional Democrat have opened the door to an infrastructure bill that is not offset by tax increases and instead adds more to the budget deficit, which they hope could bring more Republican support.

Representative Richard E. Neal, Democrat of Massachusetts and the chairman of the Ways and Means Committee, said in an interview on Thursday that “there could be” tax increases attached to an infrastructure bill this spring.

But then he cited Jerome H. Powell, the chair of the Federal Reserve, who gave a speech on Wednesday reiterating that the Fed planned to keep interest rates low for the foreseeable future and saying that now was not the time to worry about deficits. Democrats have hailed those remarks as encouragement to continue to deficit spend in order to bolster the recovery.

He added that there was “the alignment here of a Republican chairman of the Federal Reserve Board, with the quest and mission of Democrats in Congress — and I think, by the way, silently, a lot of Republicans, too — that it’s time to go big.”

Mr. Powell did not endorse any specific spending plans in his speech on Wednesday. But he said that while the federal budget was not on a sustainable path, and that fiscal policymakers would need to return to that question, “the time to do that, though, is not now.” He suggested that short-term deficit spending remained “the essential tool” for the recovery.

Mr. Biden’s aides have worked since before Inauguration Day to assemble an infrastructure proposal that is expected to include expansions of rural broadband, road and bridge repairs, a half-million charging stations for electric cars and other projects that the administration promises will create “millions of jobs.”

The president discussed those plans on Thursday with Vice President Kamala Harris; Pete Buttigieg, the transportation secretary; and a quartet of senators including two Republicans, Shelley Moore Capito of West Virginia and James M. Inhofe of Oklahoma.

Mr. Biden proposed tax increases to pay for those plans during the campaign, but in recent days, some of his economic aides have hinted privately that some or all of the infrastructure package could be deficit financed.

Some fiscal hawks in Washington warned lawmakers on Thursday that borrowing for infrastructure would inflame the risks of a future debt crisis.

“We understand and share the desire to make vital public investments and address income inequality,” said Maya MacGuineas, the president of the Committee for a Responsible Federal Budget. “But we shouldn’t ask our kids to bear the cost of all this when we are already leaving them a record mountain of debt. We should pass a reasonable Covid relief package, pay for new spending initiatives, and then work together to bring the long-term debt under control.”

Even before the pandemic hit, budget deficits — which represent the gap between what the United States spends and what it collects through taxes and other federal revenues — grew to more than $1 trillion annually under President Donald J. Trump. The deficit ballooned under his watch as a result of a large tax-cut package that Republicans passed in 2017 and a series of bipartisan spending increases.

The budget deficit hit a post-World War II record, in size and as a share of the economy, in the 2020 fiscal year, as Mr. Trump and Congress agreed on trillions in spending programs and tax cuts to aid people and businesses hit hard by the pandemic recession.

The total debt grew to larger than the size of the nation’s economic output last year as a result of those efforts and of plunging tax receipts amid the recession.

The new projections from the budget office show debt continuing to mount, but at a slower pace than officials expected in September. The office now forecasts federal debt to reach 105 percent of the nation’s economy by 2030. That is down from its September forecast of 109 percent. The report also now forecasts that the deficit will dip briefly below $1 trillion in the 2023 and 2024 fiscal years, before rising again in the second half of the decade. From 2021 through 2031, the deficit is forecast to average $1.2 trillion per year.

Officials at the budget office also said Thursday that several federal trust funds, including those for Social Security and for the nation’s highways, were now expected to remain solvent for years longer than the office projected in the fall.

Some Republicans have criticized Mr. Biden’s economic aid proposal for adding too much to deficits. In a series of recent committee hearings intended to solidify the details of Mr. Biden’s plan, Republicans have fought to curtail the size of the bill through a series of largely unsuccessful amendments that would have reduced spending levels or forced additional parameters on who could receive aid.

“This nearly $2 trillion stimulus package is neither targeted nor a stimulus,” Representative Kevin Brady, Republican of Texas, Mr. Neal’s counterpart on the House Ways and Means Committee, said on Wednesday as they began debating the bill. Like several Republicans on Capitol Hill, he lamented that Democrats were poised to pass the package unilaterally through a complex budget process called reconciliation. (Republicans used the process twice in 2017, over similar Democratic complaints, to pass Mr. Trump’s tax cuts and try unsuccessfully to repeal the Affordable Care Act.) 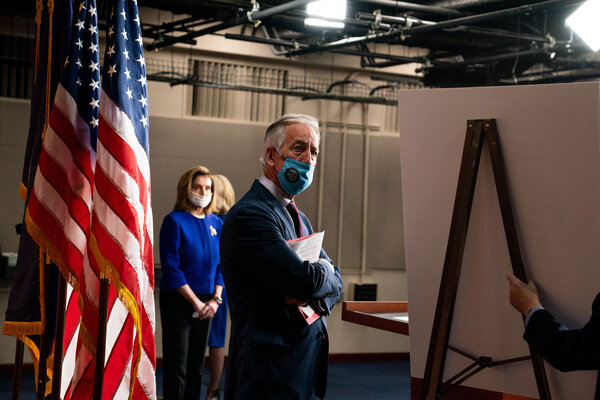 Progressive Democrats have fought to keep the aid as robust as possible, and to include a series of longtime liberal priorities that failed to pass a Republican-controlled Senate either as stand-alone bills or part of previous relief packages. Most notably, party leaders are barreling ahead with a gradual increase in the federal minimum wage to $15 from $7.25 by 2025, despite potential procedural hurdles in the upper chamber.

Liberal Democrats, including Representative Pramila Jayapal of Washington State, the chairwoman of the House Progressive Caucus, have thus far prevailed in keeping the wage increase in the bill and maintaining an income threshold of $75,000 for individuals in determining which Americans receive full $1,400 per-person direct payments.

“While we take this as incredible victory in keeping both of these things in, we have to make sure they stay in all the way through the House and the Senate,” Ms. Jayapal said in an interview.

In separate news conferences on Thursday, both Speaker Nancy Pelosi of California and Senator Chuck Schumer of New York, the majority leader, vowed to keep the provision in the final package.

Tags: CARE, Federal Budget, US ECONOMY
You may also like
Recent News: