WASHINGTON — Two of the world’s most powerful central bankers said on Thursday that economic risks from the coronavirus remain high, and they cautioned against putting too much faith in a quick fix from a vaccine, delivering a sober message as U.S. lawmakers signaled that another stimulus package was unlikely before year’s end.

“The next few months could be challenging,” Federal Reserve Chair Jerome H. Powell said during a webcast panel discussion, where he appeared alongside his European counterparts. Both Mr. Powell and Christine Lagarde, head of the European Central Bank, warned that while recent progress toward a vaccine was welcome news, it was too soon to write off looming risks to the global recovery as coronavirus cases surge globally, causing renewed lockdowns in some jurisdictions.

“From our standpoint, it’s just too soon to assess with any confidence the implications of the news for the path of the economy, especially in the near term,” Mr. Powell said.

On Monday, the pharmaceutical company Pfizer announced encouraging results from its vaccine trials, nudging stock markets toward new heights. On Thursday, stocks ceded some of their recent gains, with losses deepening after Mr. Powell and Ms. Lagarde spoke.

While Mr. Powell acknowledged the vaccine progress, he cautioned that “significant challenges and uncertainties” remain around timing, production, distribution and the efficacy for different groups.

Ms. Lagarde, explaining that she did not want to be “exuberant” about the treatment, also pointed to “uncertainties — about the logistics, about the transportation, about the rolling out, about the fabrication” and about how many people will actually be vaccinated in 2021.

Economic risks in the United States remain acute as millions remain out of work, government support fades and the country sets records for virus cases and hospitalizations, prompting cities and states to impose new restrictions on activity.

Yet prospects for another relief package before year’s end narrowed on Thursday as Democrats and Republicans continued to disagree over the scope and cost of a bill and as a top Republican indicated that Senator Mitch McConnell, the majority leader, was no longer planning to rely on Treasury Secretary Steven Mnuchin to cut a deal with Democrats, reflecting his party’s wariness that Mr. Mnuchin had been too eager to concede.

Speaker Nancy Pelosi of California and Senator Chuck Schumer of New York, the minority leader in the Senate, cited record-breaking infections across the country, along with the election of Joseph R. Biden Jr., to justify their position that any package must be much larger than what Republicans had been suggesting.

But in holding firm to their respective positions — Democrats demanding $2.4 trillion as a starting point, with Republicans proposing a fraction of that amount — congressional leaders appeared to be closing the door on the possibility of a year-end compromise.

“My view is, the level at which the economy is improving further underscores that we need to do something at about the amount that we put on the floor in September and October,” Mr. McConnell told reporters, referring to the targeted $500 billion packages Senate Republicans tried to pass before the election.

The price tag Ms. Pelosi and Mr. Schumer were discussing, he said, “is not a place I think we’re willing to go, but I do think there needs to another package.”

Key supports for displaced workers and shuttered businesses have expired, and while households have been using savings that they built up earlier in the year to keep up with their bills, there is a risk that many will struggle to make ends meet as they run through those nest eggs. Mr. Powell and his colleagues have been clear that more support will be needed, in particular as the pandemic accelerates shifts in the economy — like increased remote work and automation — and leaves some workers permanently displaced.

“We’re recovering, but to a different economy,” Mr. Powell said, warning that a “substantial group of workers” are “going to need support as they find their way in the post-pandemic economy, because it’s going to be different in some fundamental ways.”

Mr. Powell said that while the United States’s recovery has been faster and stronger than anticipated and is expected to continue, it has been uneven — and it remains incomplete.

“The main risk we see to that is clearly the further spread of disease here in the United States,” Mr. Powell said. “We’ve got new cases at a record level, we’ve seen a number of states begin to reimpose limited activity restrictions, and people may lose confidence that it is safe to go out.” 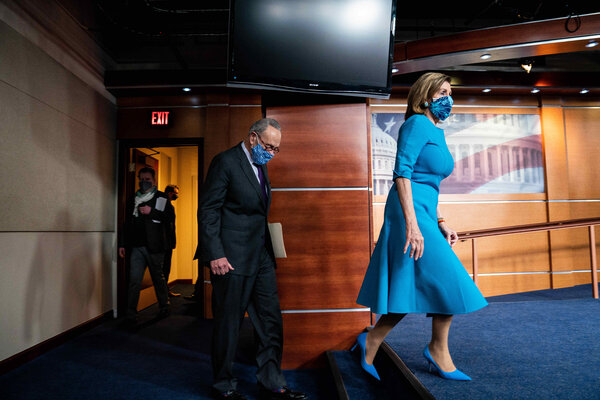 Ms. Pelosi and Mr. Schumer huddled with Mr. Biden by phone on Thursday, stressing afterward that they were on the same page about the “urgent need” for Congress to provide bipartisan funds to support the unemployed, workers, small businesses, state and local governments facing huge budget deficits, and the nation’s health care system before he takes office. It had been unclear how actively Mr. Biden, the incoming head of the party, would involve himself in negotiations before his inauguration.

Ms. Pelosi portrayed Republicans as “coldhearted” for insisting on a smaller relief package and tried to upbraid them.

“It’s like the house is burning down and they just refuse to throw water on it,” she said.

That message had clear political overtones. Nearly everything said in the halls of Congress these days appears to be aimed, at least in part, at voters in a pair of runoff Senate elections in Georgia in January that will determine control of the Senate. Economists at Goldman Sachs suggested that Republicans might be eager to secure a deal before the Jan. 5 vote to avoid claims that the Republican-controlled Senate prevented help from reaching households — but Democrats might have an incentive not to compromise much, with that vote imminent.

“The political atmosphere is less conducive to a deal than it seemed a week ago,” Alec Phillips and his colleagues at Goldman Sachs wrote in a research note on Thursday, noting that the prospect for a vaccine could itself reduce appetite for a big government package.

The two sides will also have to reach an agreement on crucial spending legislation to prevent a lapse in government funding on Dec. 11, with either an agreement on the dozen annual must-pass bills or another stopgap spending bill. There is a possibility that lawmakers will wrap additional relief funding into a larger package with that legislation.

“We’d like to do a streamlined or targeted stimulus bill, but we’ve got to have some support from the other side,” said Senator Richard C. Shelby of Alabama, the chairman of the Senate Appropriations Committee.

Senator Charles E. Grassley of Iowa, chairman of the Senate Finance Committee, suggested that Republicans were in no mood to compromise, signaling that Mr. Mnuchin would no longer be leading talks with Ms. Pelosi.

“There hasn’t been any discussion yet between McConnell and Pelosi, but McConnell is not going to rely on Mnuchin anymore to do the dealing,” Mr. Grassley told reporters on Thursday morning. “I think he’s intending to take it over and try to get something going.”

Tags: CARES Act;, Stimulus, US ECONOMY
You may also like
Recent News:
This website uses cookies to improve your user experience and to provide you with advertisements that are relevant to your interests. By continuing to browse the site you are agreeing to our use of cookies.Ok