MILAN — “Everything must change for things to stay as they are.”

Marco Bizzarri, president and chief executive officer of Gucci, has no doubts change is a must for the company he helms in order to continue to have a competitive advantage and secure a profitable future. To help drive home the point, Bizzarri quoted Tancredi Falconeri’s famous citation from “The Leopard” by Giuseppe Tomasi di Lampedusa.

Unquestionably, Gucci is in a new phase of its history, just as it turns 100 next year. Bizzarri spoke to WWD via a video call from his home in Rubiera, Italy, a few days after creative director Alessandro Michele revealed that he will present his new collection, called “Ouverture of Something That Never Ended,” through a seven-part film series codirected with Gus Van Sant to run during the first digital fashion and film festival, dubbed GucciFest, running Nov. 16 to 22.

“We asked ourselves about the future even before the COVID-19 pandemic. The fashion circus, [living like] Charlie Chaplin in ‘Modern Times’ [swallowed by a factory machine] was no longer sustainable, and we wanted Alessandro to be able to feed his creativity. To do this, we needed to think differently. COVID-19 just accelerated the changes,” said Bizzarri.

As reported, Michele has narrowed down the moments Gucci will present its new collections to two from five and they will not necessarily be associated with a global fashion week. Asked to comment on the GucciFest and whether this will be the path going forward, Bizzarri enthused about the cross-pollination of the fashion and film industries, but “for the future we will see. We don’t set limits or obligations, this is the way it is today. It also depends on how Alessandro will feel, he will decide what will be best for Gucci. You know, he is a creative talent, but he is also very rational and we have intense conversations with him,” explained Bizzarri.

That said, aware of the need to fuel customers’ interest, drops of collections connected to special events will continue to exist, despite fewer main collections, he added. 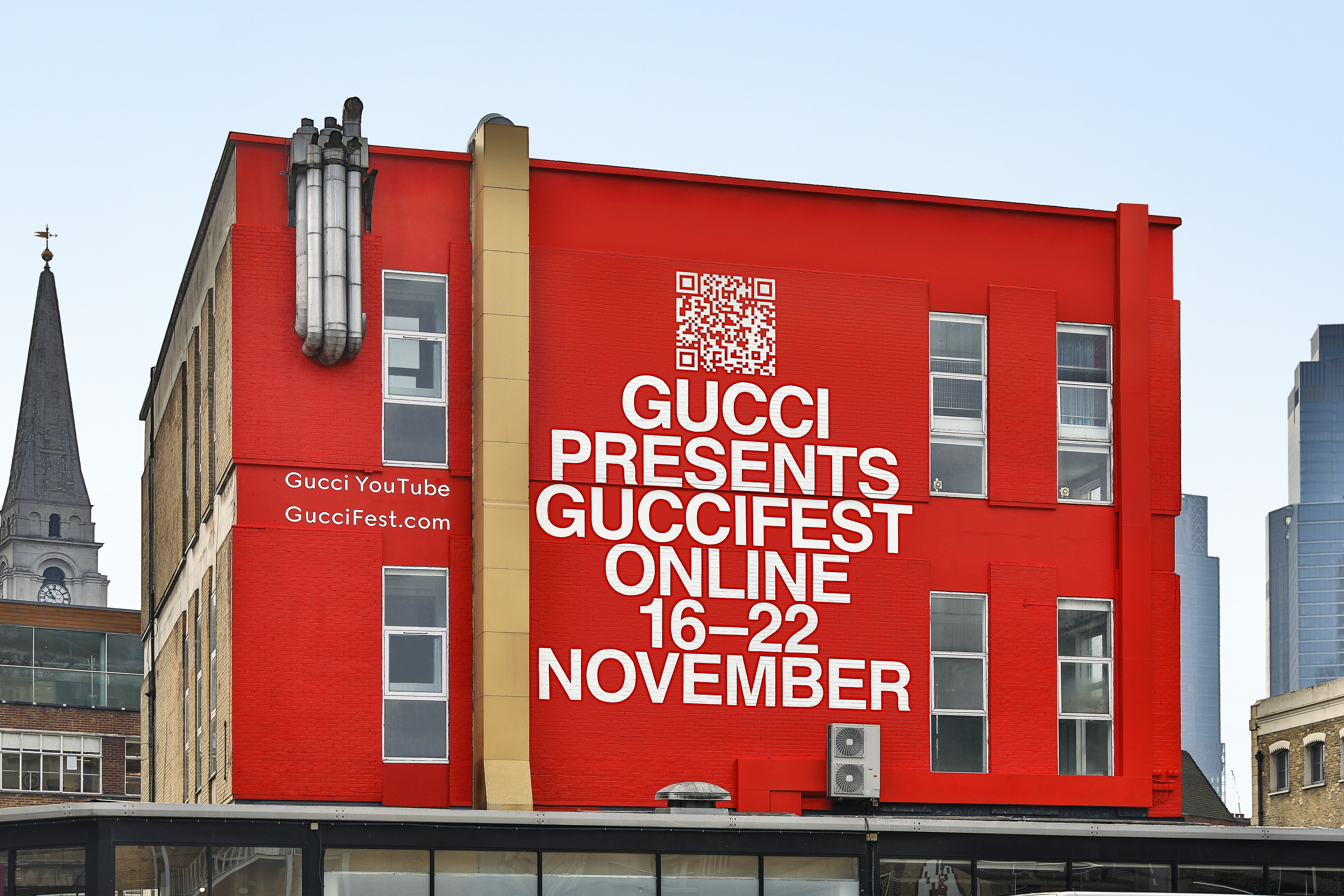 The executive stressed that what works for Gucci may not work for others. “Each brand should craft its own path. You cannot stay anchored safely forever, but you also can’t embrace change just because. Disruption is taking place and how you interpret it depends on the brand’s organization and leadership.”

Bizzarri contended that change “is easier for Gucci,” a company that was almost bankrupt before the arrival of Tom Ford and Domenico De Sole, and that completely revisited its aesthetics after Frida Giannini’s exit in 2015 and under Michele. Balancing the trade-off between legacy and innovation is key, the executive believes, touting the company’s “amazing flexibility, also during the lockdown, and especially during the lockdown,” with profits in the first half that beat expectations.

In the first half, the brand’s recurring operating margin showed resilience, exceeding 30 percent. Bizzarri said Gucci weathered the first lockdown, when production in Italy was stalled in March and until the end of April, without a dramatic delay in manufacturing and deliveries.

“We are even readier now for the second wave of restrictions,” he claimed.

“Bold choices must be made in tough times, seeing opportunities in a crisis, without thinking in terms of quarters but years, with a long-term business model,” he said, giving a shout-out to Kering chairman and ceo François-Henri Pinault’s ongoing support.

One such bold choice meant cutting back on the brand’s wholesale distribution for better control with the aim of lowering the channel’s share of overall revenues to less than 10 percent by next year. In the third quarter, retail sales accounted for 87 percent of the total, compared with 86 percent in the first half. Wholesale revenues contracted to 31.6 percent, in line with the house’s ongoing strategy of enhancing the exclusivity of its distribution by reducing the number of third-party retailers.

Bizzarri said it was important to cement the relationship with multibrand stores that are able to boost sales to local shoppers — also given the contraction in tourist spending due to travel limitations.

The same strategy applies to increasing control over the brand’s online store and the group’s e-tailers, strengthening its relationship with consumers and deciding pricing strategies.

The company has been putting a digital-first approach at the center of its strategy, embracing new technologies and establishing key business partnerships with top tech companies. Two years ago it launched Gucci 9, which optimizes the remote client experience with individually tailored consultation as it would in a physical store.

The ambience of the Gucci 9 Service Center has grown to comprise seven units in Florence, Tokyo, Seoul, Shanghai, Singapore, New York and Sydney and replicates the aesthetics of the brick-and-mortar stores designed by Michele.

That said, Bizzarri noted that physical stores will always be important, especially from an omnichannel perspective. As of the end of September, the company had 492 directly operated stores globally.

One way to differentiate the stores is through food, said Bizzarri. The Gucci Osteria opened at the Gucci Garden in Florence in 2018, followed in February by one in Los Angeles on the rooftop of the Beverly Hills flagship. This is a collaboration with three-Michelin-star chef Massimo Bottura, a childhood friend of Bizzarri’s. Another Osteria is planned to open in Tokyo in May.

Bizzarri believes Gucci still has much untapped potential, naming the burgeoning beauty category, for example, following the “very strong success” of the brand’s new lipsticks and fragrances, including Bloom. Next year, Gucci plans to roll out new makeup to continue to expand its cosmetics division — fragrances, lip, face and hair products — and to support The Alchemist’s Garden line, a creation between Michele and master perfumer Alberto Morillas.

Also in 2021 Gucci plans to build on its lifestyle appeal, selling in selected stores “fun collections” of gaming cards, bottles and gifts, while it will also develop its Décor offer. “Alessandro doesn’t call it a home line, he likes these items to build the Gucci atmosphere,” Bizzarri observed.

Last year, leather goods accounted for 58 percent of sales, shoes for 17 percent and ready-to-wear for 13 percent. Watches and jewelry represented 4 percent of the total. In 2019, Gucci sales totaled 9.63 billion euros, ahead of the 10 billion euros projected in 2018 by Bizzarri.

As reported, organic sales at Gucci fell 8.9 percent in the third quarter, compared with a 44.7 percent drop in the previous three months. Analysts are watching the brand in this moment of change as Gucci’s performance compared to gains at luxury peers Louis Vuitton and Hermès. Bizzarri expressed his confidence in the brand’s strategies going forward.

For one, markets are responding well. Gucci sales in North America climbed 43.7 percent in the third quarter and revenues in Asia-Pacific were up 10.6 percent, despite high bases of comparison in recent years. “China has recovered quickly [from the pandemic] and there is a hunger for luxury shopping that we are able to meet because we are well-positioned in the region,” he said.

He also noted that after tripling business in the U.S. between 2015 and 2019, and a slower year in 2019, Gucci has recovered well in that market.

In a pairing that is expected to resonate in that market, Gucci is teaming with The North Face on a co-branded collection. While details such as the timing of the launch are still under wraps, Bizzarri said The North Face has opened its archives for the first time to Michele. “The North Face will provide its technical expertise and Alessandro will bring design” to the collection, said Bizzarri.

“The North Face was founded in the Sixties in San Francisco and Alessandro is very much drawn to and interested in that decade, as well as the Seventies,” said the ceo.

The idea had been to reveal the tie-up in May, when Gucci was meant to show its cruise 2021 collection in San Francisco, but those plans were scuppered by the pandemic, he said.

Last month, Gucci also revealed it was partnering with luxury consignment company The RealReal through the end of the year to launch an online shop featuring Gucci items, promoting circularity for luxury fashion, in line with the brand’s sustainability goals, after launching the Off the Grid collection employing recycled, organic, bio-based and sustainably sourced materials.

All paper and cardboard come from sustainably managed forest sources and an uncoated paper has been used to ensure it is fully recyclable. The paper is also colored a unique green at the beginning of the production process to reduce the use of inks. 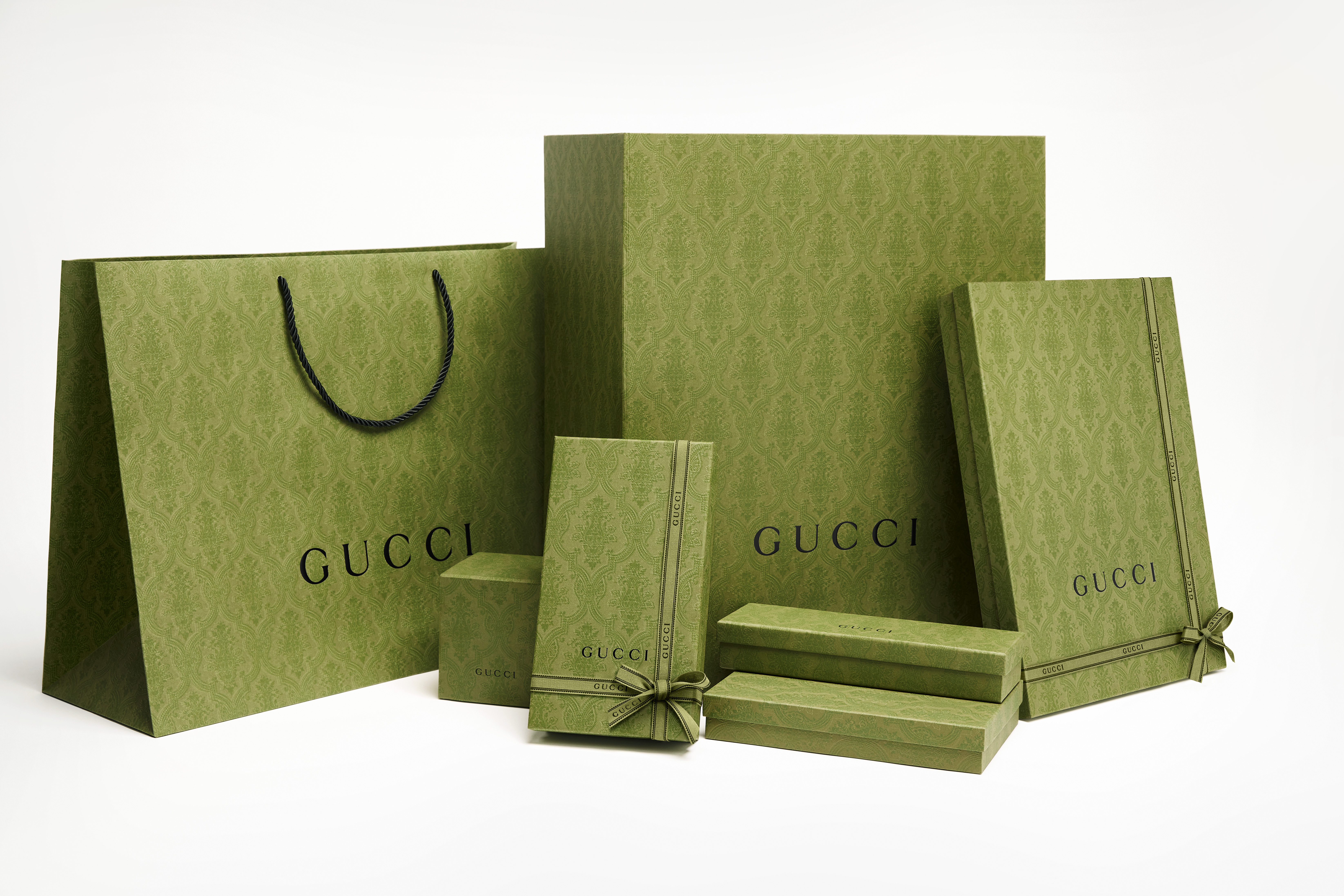 Climate change remains the biggest challenge, observed Bizzarri. The company has been carbon neutral across its entire supply chain since 2018. Gucci’s environmental profit and loss results for 2019 revealed a 39 percent reduction for the house’s combined impacts and a 37 percent decrease in greenhouse gas emissions alone, relative to growth from a 2015 baseline.

Gucci is also compensating for residual emissions that cannot be avoided with offsetting REDD-plus [reducing emissions from deforestation and forest degradation] projects to protect forests and biodiversity. “Offsetting is the only way,” said Bizzarri.

“This will be a different Gucci in 2021, readier for the future compared to a year ago,” Bizzarri offered.

While he underscored that Michele wants to avoid any nostalgia marking the company’s 100th anniversary next year, Gucci will hold a series of events throughout 2021 starting from Florence, where the company was founded, although Bizzarri demurred from providing details.

However, he did say that the company has renovated its storied headquarters in Florence at the 16th-century Palazzo Settimanni in Via delle Caldaie, and that the archives stored in that location will be available for viewing by appointment.