It has been a devastating year for those in the events business. Todd Fiscus, of Dallas-based Todd Events, said his company made $2.4 million in December 2019 alone from largely corporate holiday gatherings. But this year, his December revenue will drop to just $191,000.

Between Thanksgiving and the end of the year, Chris Starkey, who co-owns Imprint Group, an entertainment business based in Colorado, with outposts in Florida and Nevada, typically would have 15 to 35 corporate events scheduled every week. The pre-pandemic income from these gatherings provided 25 to 30 percent of his annual revenue of $25 million. While his company has organized some digital events as substitutes for in-person gatherings, the volume is a fraction of 2019.

As companies cancel their year-end events, the 2020 holiday season has made a terrible year even worse for those in the events business. According to a report from the job placement and coaching firm Challenger Gray & Christmas, Inc., only 23 percent of companies surveyed planned holiday gatherings this year, and of those, 74 percent were virtual. In 2019, 76 percent of companies had parties at the end of the year. 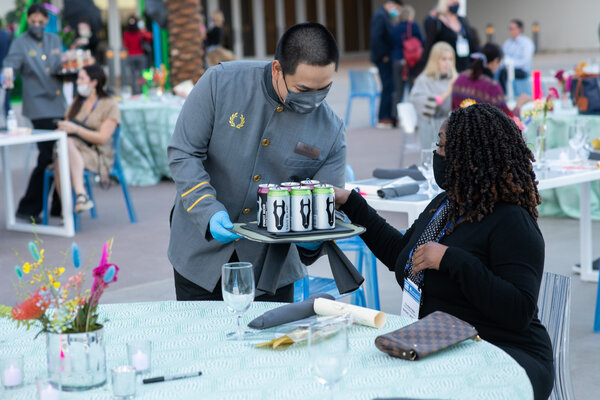 “For the industry, it’s a big ‘aha’ moment,” said Amy Calvert, chief executive of the Events Industry Council, a trade organization based in Washington. “Events touch all sectors — so many who work in events are gig workers, or minority or women-owned businesses. These people are disproportionately affected with the cessation of in-person events.”

Mr. Fiscus’s company, for example, organizes celebrations for an average of 300 people. Those gatherings often employ as many as 58 subcontractors, from florists and cake vendors to lighting specialists. As a result, 150 to 170 people “are living off these events,” he said. “With a drop of 85 to 90 percent in revenue, that’s a lot of humans without work.”

Some companies have chosen to help these small businesses, and the contractors they use, by rolling over deposits to 2021 or 2022 or working with them to provide alternative ways of entertaining this year, such as virtual events or drive-by or smaller, outdoor gatherings. But without additional deposits, many will be effectively working for less pay in the future.

Seasoned entertainers said that careful budgeting for their businesses as well as their own lives helped them ride out the year, irrespective of whether they received government loans through the federal Small Business Administration’s Paycheck Protection Program, generally known as P.P.P. — though the unknown duration of the pandemic makes that a tricky long-term proposition.

“If we can only have events with 30 to 40 people, many companies cannot survive,” Mr. Fiscus said. “And while some clients would like us to book for parties in 2023, how can we plan for those if we don’t know if we’ll survive?”

Others, like Darrell Martin, who heads Hip Parties, based in New York and Philadelphia, were unable to get a P.P.P. loan and had to rely on personal savings to make it through. Living through both the aftermath of Sept. 11 and the 2008 financial crisis, he said, has reinforced his tendency toward conservative spending. But events continued, even if at reduced scale, after past crises. This year, of course, has been different, with events canceled outright.

“For the most part, our clients are really good-hearted people. So they understood when we calculated the amount of money we had paid to our subcontractors — like dancers, photographers and lighting experts — and returned the difference to our clients,” said Mr. Martin, who still works some parties as a D.J. “But I personally felt it was out of the question to ask our subcontractors for money back because many were struggling more than we were.”

Lucy Wrubel, a D.J. based in Dallas, has had a similar drop in income this year. “I typically do 12 jobs a month; I had at least 100 jobs booked for this year and all the clients wanted their deposits back.” Although Ms. Wrubel, a single mother, was devastated to let go of her assistant — her one employee — she said she had survived downturns before and “can handle again.” She is sanguine about the quiet. “I finally redid my website and incorporated the imagery from 20 years of jobs. I’m working on a book and a podcast. I’m releasing my playlists on Spotify for free to get my name out there. I’m throwing lots of things at the wall to see what sticks.”

While she tried a few virtual events, they were unfulfilling, she said — a sentiment echoed by Mr. Martin: “What we provide is a personable interaction.”

The cancellations have made the D.J.s revisit their contracts and get a crash course in legalities. Force majeure clauses — those that essentially excuse obligations under a contract in light of extraordinary events — suddenly became central for future bookings. “There’s the legal jargon and the personal side of contracts — it is an intimate relationship,” Mr. Martin said. “But the longer time goes on, that personal relationship dissipates and people become less enchanted.”

Some companies have turned to alternative gatherings, providing some revenue.

Western Union, based in Denver, for example, hired Mr. Starkey for a so-called incentive trip for employees earlier this year. After the trip was canceled, instead of recouping the company’s deposit, they booked him for the event, now rescheduled for 2021, said Beth Gangel, the company’s head of global meetings and events.

Even when the pandemic subsides and events again take place, few expect revenues to match those of the “before times” until 2022 or even 2023, Mr. Fiscus said. It will take time for corporate and personal clients to feel secure scheduling a big event, in part depending on vaccination rates and because of lingering unease over large gatherings.

Additionally, corporate clients have “realized this year that they can retain a lot of profit by not doing events, so we need to stay diverse and continue to innovate,” Mr. Starkey said.

And while many corporate, and some individual, clients have paid it forward by rescheduling for 2021 or even 2022, future bookings cannot replace revenue from canceled parties. “There is a huge waiting game for us in the entertainment industry,” Mr. Fiscus said. “And the longer the pandemic goes on, the more tenuous it gets.”

In the interim, while the entertainers expressed personal sadness as well as concern for the contractors they cannot currently employ, they are trying to stay both engaged and optimistic. Mr. Martin volunteers regularly delivering food, gets corporate volunteers involved with communities in need and works with a social service agency, “almost for free,” to plan parties for older adults. “The bright side,” he said, is that “instead of worrying about my business, I focus on others, like seniors who can’t get out of their houses.”

And Mr. Starkey has delivered food to frontline workers and has become something of a viral sensation, posting videos of him dancing with his daughters, one of which got close to 14 million views on his Facebook page. He works with his co-founders, Nicole Marsh and Rikki Mor. Ms. Mor said she regularly checked in with the musicians and D.J.s they relied on, because many were struggling, if not financially, then emotionally.

For many, the biggest loss is one of professional and personal fulfillment. “I miss working,” Ms. Wrubel said. “What I didn’t realize until it was completely gone, is how much joy it gave me to being around people who are laughing and dancing.”

Tags: Coronavirus;COV, Small business
You may also like
Recent News:
This website uses cookies to improve your user experience and to provide you with advertisements that are relevant to your interests. By continuing to browse the site you are agreeing to our use of cookies.Ok