Like many big law firms, Jones Day, whose roots go back to Cleveland in the late 1800s, has prided itself on representing controversial clients.

There was Big Tobacco. There was the Bin Laden family. There was even the hated owner of the Cleveland Browns football team as he moved the franchise to Baltimore.

Now Jones Day is the most prominent firm representing President Trump and the Republican Party as they prepare to wage a legal war challenging the results of the election. The work is intensifying concerns inside the firm about the propriety and wisdom of working for Mr. Trump, according to lawyers at the firm.

Doing business with Mr. Trump — with his history of inflammatory rhetoric, meritless lawsuits and refusal to pay what he owes — has long induced heartburn among lawyers, contractors, suppliers and lenders. But the concerns are taking on new urgency as the president seeks to raise doubts about the election results.

Some senior lawyers at Jones Day, one of the country’s largest law firms, are worried that it is advancing arguments that lack evidence and may be helping Mr. Trump and his allies undermine the integrity of American elections, according to interviews with nine partners and associates, who spoke on the condition of anonymity to protect their jobs.

At another large firm, Porter Wright Morris & Arthur, based in Columbus, Ohio, lawyers have held internal meetings to voice similar concerns about their firm’s election-related work for Mr. Trump and the Republican Party, according to people at the firm. At least one lawyer quit in protest.

Already, the two firms have filed at least three lawsuits challenging aspects of the election in Pennsylvania. The cases are pending.

The litigation appears likely to intensify. Mr. Trump’s lawyer, Rudolph W. Giuliani, said at a news conference in Philadelphia on Saturday that a federal lawsuit would soon be filed claiming widespread voter fraud. 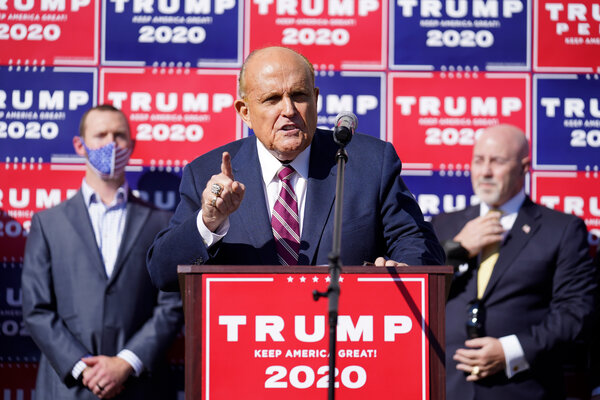 In recent days, Mr. Trump and his allies have been trying to raise money to bankroll their legal efforts. Some of the fund-raising entreaties have noted that a portion of donated money might be used to pay down the campaign’s existing debts, rather than to fund new legal efforts.

While it is not clear which law firms will be filing the suits, Jones Day has been one of Mr. Trump’s most steadfast legal advisers.

At the time, some senior lawyers at Jones Day objected to working closely for a polarizing presidential candidate, according to three partners at the firm. They grimaced at the sight of Mr. McGahn standing with Mr. Trump onstage after he won the New Hampshire primary in February 2016. A month later, the firm hosted a meeting at its Capitol Hill office with Mr. Trump and Republican lawmakers as he sought to win over the party establishment.

The firm’s work for Mr. Trump has also garnered it unfavorable public attention. “Jones Day, Hands Off Our Ballots,” read a mural painted on the street outside the law firm’s San Francisco offices late last week.

During the Trump presidency, Jones Day has been involved in some 20 lawsuits involving Mr. Trump, his campaign or the Republican Party, and it worked for the Trump campaign on government investigations into Russian interference in the 2016 election.

The work has been lucrative. Since 2015, Jones Day has received more than $20 million in fees from the Trump campaigns, political groups linked to Mr. Trump and the Republican National Committee, according to federal records. Jones Day lawyers said that was a small portion of the firm’s overall revenue.

In addition to Mr. McGahn, a number of other partners at the firm joined the Trump administration. Noel Francisco became Mr. Trump’s first solicitor general. Eric Dreiband is an assistant attorney general in the Justice Department.

Before the 2020 campaign, some partners at Jones Day said, they had to reassure clients that the firm’s representation of the Trump team would not influence the rest of the firm’s work, according to four partners. Lawyers at the firm have worked to promote gun control and have represented unaccompanied minors, including many detained by the federal government.

But partners generally swallowed their concerns about the close relationship with Mr. Trump.

Then the president and his allies, down in the polls, began fanning fears about voter fraud, part of a broader effort to sow doubts about the integrity of the election.

“Many of the GOP’s litigation concerns are meritorious in principle. But the president’s inflammatory language undercuts the claim that Republicans seek merely to uphold statutory safeguards needed to validate the results’ credibility,” Benjamin L. Ginsberg, a longtime Republican elections lawyer who left Jones Day in August, wrote in The Washington Post the following month.

After the election, as Mr. Trump’s reported lead in Pennsylvania was evaporating, Jones Day and Porter Wright petitioned the Supreme Court to segregate all ballots received after Nov. 3. Pennsylvania, they wrote in their brief, “may well determine the next President of the United States.” A prominent Republican lawyer, John M. Gore, is helping to lead the effort at Jones Day. He previously served as an assistant attorney general in Mr. Trump’s Justice Department.

On Friday evening, Justice Samuel A. Alito Jr. ordered election officials in Pennsylvania to keep late-arriving ballots separate and not to include them in announced vote tallies. (Pennsylvania’s secretary of state had already given the same guidance.)

Six Jones Day lawyers said that given the small number of late-arriving ballots involved in the litigation, and the fact that they already had been segregated, the main goal of the litigation seemed to be to erode public confidence in the election results.

Jones Day did not respond to a request for comment.

In recent days, two Jones Day lawyers said they had faced heckling from friends and others on social media about working at a firm that is supporting Mr. Trump’s efforts.

A lawyer in Jones Day’s Washington office felt that the firm risked hurting itself by taking on work that undermined the rule of law. “To me, it seems extremely shortsighted,” the lawyer said.

This year, Jones Day has received more than $4 million in fees from Mr. Trump, political groups supporting him and the Republican National Committee, according to the most recent Federal Election Committee records.

A number of Democratic and Republican partners at Jones Day said that while some of their colleagues were grumbling about the Trump relationship, it was the firm’s obligation to continue representing long-term clients, even if individual lawyers disagreed with their politics or tactics. Two partners recalled how Jones Day had stuck with Art Modell, the embattled Cleveland Browns owner, even when there were death threats against the firm’s lawyers and security staff had to escort employees in Cleveland to their cars.

The outcry at Porter Wright, which like Jones Day was founded in the 1800s in Ohio, appears more intense.

Over the summer, some lawyers at Porter Wright were dismayed to learn that the firm would be representing the Trump campaign in Pennsylvania, according to three current and former employees.

Chief among their concerns: How could lawyers, whose profession is based on the rule of law, represent someone who they felt had frequently tried to flout it? One lawyer said he was concerned that the firm might be asked to try to delay the election. Another said he quit in response to the decision to represent Mr. Trump in Pennsylvania.

At two meetings, associates at Porter Wright told the firm’s partners that they objected to the work for the Trump campaign, according to the three current and former employees. They were told that the assignment was limited to the election in Pennsylvania. That assurance struck some attendees as hollow, since the state might decide the election.

Robert J. Tannous, the firm’s managing partner, declined to comment in detail on the work for Mr. Trump. He said, “Porter Wright has a long history of representing candidates, political parties, interest groups and individuals at the local, state and federal levels on both sides of the aisle, and as a law firm will continue to do so.”

Tags: 2020 election, Lawy, US Politics
You may also like
Recent News: