MILAN — Would it be possible to launch an independent indie fashion magazine in 2021 and transform it into a brand and consultancy platform? Joerg Koch, the editor in chief of Berlin-based cult magazine 032c, doubts it.

The biannual magazine turned 20 last year and a lot has changed since Koch established it with a do-it-yourself approach in Berlin’s suburbia. The city itself is no longer as affordable as it was in the late 1990s and early Aughts, fashion brands have become media platforms on their own and traditional fashion publications had to adapt to an ever more crowded landscape, dominated by social media and algorithms.

“For me it’s like a miracle that 032c turned 20 years old and transformed into something else, that it’s commercially successful because honestly there was no inclination for it in the beginning,” Koch said.

Begun on the eve of the Millennium when Berlin’s creative scene was abuzz, the title evolved into a consultancy when Montreal-based online store Ssense tapped Koch in 2016 as its editor in chief to bulk up the retailer’s editorial operations. Two years later, 032c made its foray into fashion, unveiling a men’s collection at Pitti Uomo in 2018 before adding within months a women’s lineup unveiled in London, all under the creative lead of Maria Koch, Joerg’s life and business partner. The ready-to-wear lines make up 65 percent of 032c’s overall business.

As the 20th anniversary approached, Koch had planned to host festive dinners in Paris and Milan, but it became clear that this wasn’t possible due to ongoing concerns over the COVID-19 situation and the lack of physical events as a result.

The team turned instead to the glossy title’s pages to build an issue with five covers, one portraying Givenchy’s new creative director Matthew Williams, and several features, including an interview with Daniel Lee of Bottega Veneta. 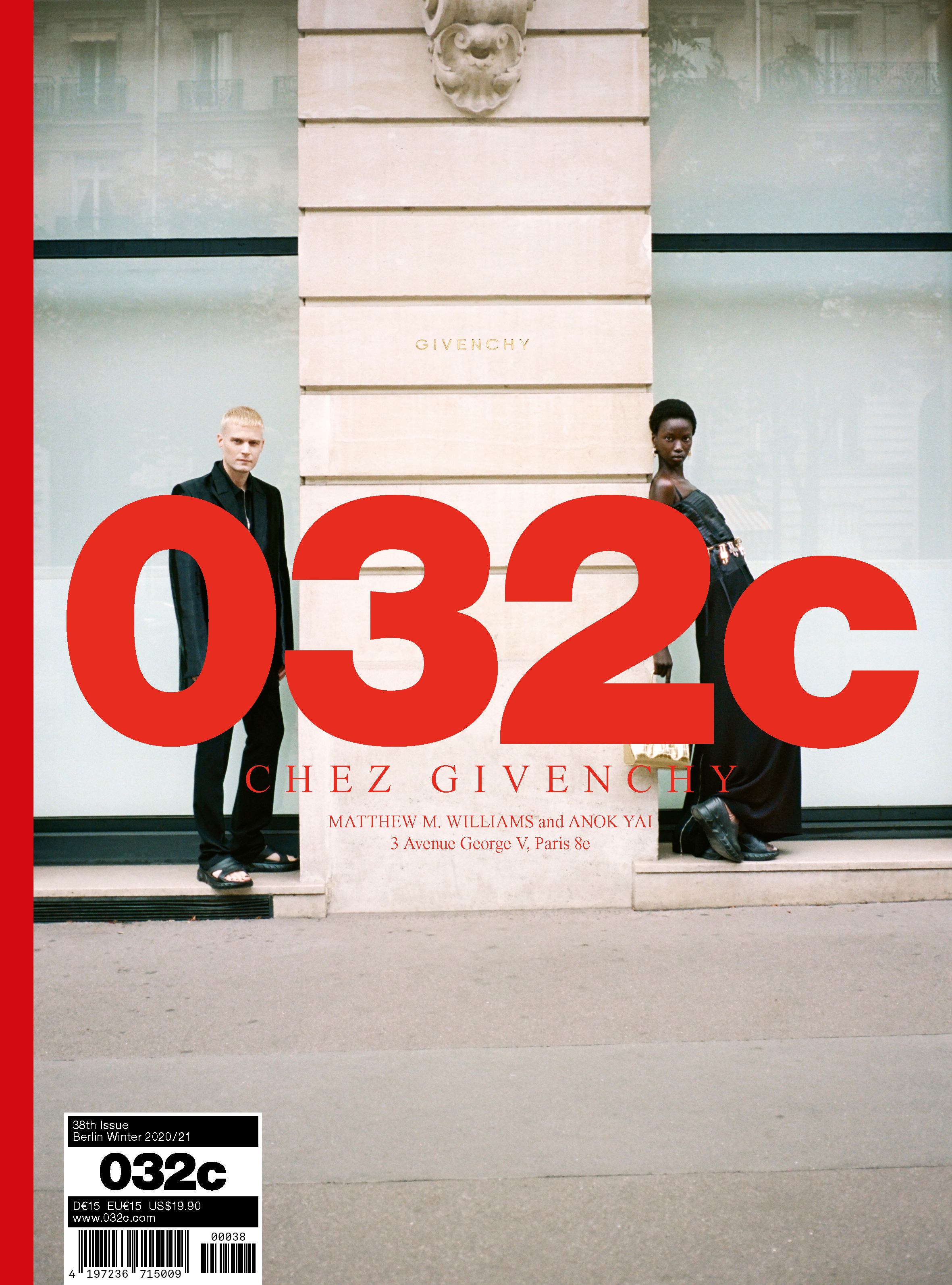 What the magazine accomplished to celebrate its history was even more ambitious. Virgil Abloh penned an open letter to the magazine and when he was provided with past 032c issues to work on a fanzine, he sent back a cardboard-covered collection of ripped-out pages in which the title had tackled the representation of Black creatives in fashion and culture at large over the past 20 years.

Abloh’s text caps off a visual fold-out compendium of imagery from the magazine, each marking a defining moment in the history of 032c, from DIY magazine to fashion and media platform. It is complemented by an essay about the role that the magazine has played within the broader media landscape put together by Berlin’s New Models, a tech and media collective that champions curation over algorithm-driven content. A greeting card from Anna Wintour completed the project.

Reached via Zoom in Berlin, Koch spoke to WWD about turning 20, Berlin’s heyday and the role fashion media can play today.

WWD: Let’s talk about the 20th anniversary. When you realized an IRL celebration could not happen, how did you translate the festive mood into the current issue?

Joerg Koch: For us it was important that there was like an outside perspective on the magazine, so we asked New Models, which is this Berlin speculative tech platform, to write about 032c, which is also like an alternative history about media and how 032c corresponded to other magazines and how it actually explored Berlin’s history. So everything is very intertwined.

On the other side is more like a visual meditation of all [of] our archive, putting together what we found interesting in that precise moment, so I guess if we would do it in two or three months the visual side would probably look different. It was also very nice to use those images for Berlin’s Reference Festival, when we had an LCD-covered truck driving through the city and that was also based on the visual side of the anniversary issue. 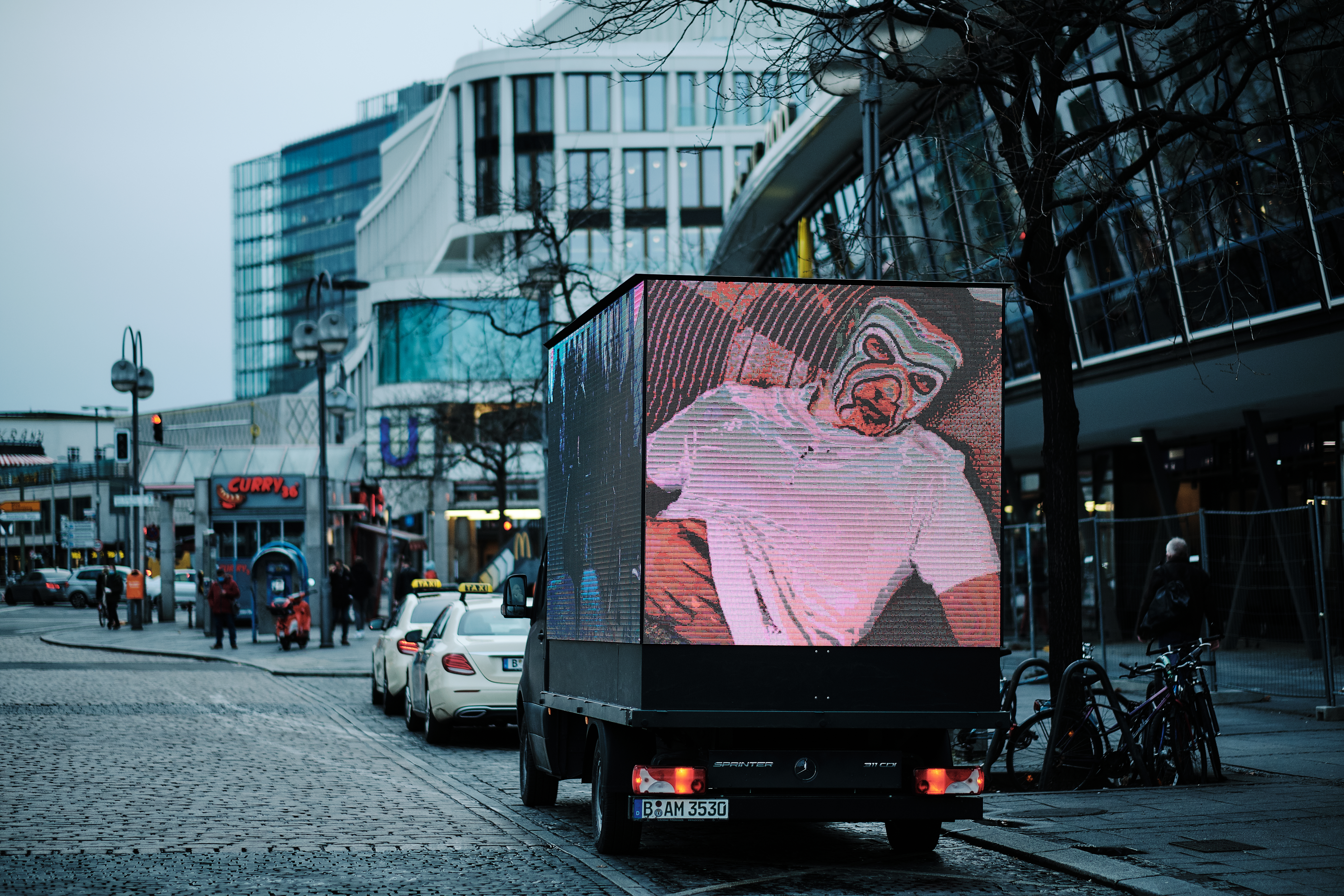 The LCD-covered truck featuring images from 032c’s past issues driving through Berlin. Courtesy of 032c.

WWD: How did you manage to get New Models, Anna Wintour and Virgil Abloh involved and share their points of view on the magazine’s 20-year history?

J.K.: It was very interesting for us to involve three people in one way or another, like New Models for the big essay, Anna Wintour with a greeting card and then Virgil [Abloh]. He was supposed to actually do a fanzine, a visual supplement of images, but he returned to us and gave us this cardboard box [covering ripped pages] of the magazine. He basically analyzed the representation of Black artists, talents in the magazine, obviously he was super influenced by the developments that were happening in America at that stage.

WWD: In the early Aughts, Berlin was the cradle of countercultures and the ideal place in Europe to launch an indie magazine. Fast-forward 20 years: Would a project like 032c still be possible in 2021?

J.K.: I think yes, but would it make sense? That’s the bigger question. Would you start a magazine? Would it be possible to have a magazine taking its time? We did not invest capital [back then] because we did not have any money, we invested time. For a couple of years, the magazine developed and found its own identity and that’s part of its strength, I think. I think this is nowadays not really possible because living costs in Berlin or anywhere else in Europe are too high, but in the late ‘90s and early Aughts it was still very cheap to do this in Berlin.

WWD: What are you missing the most from Berlin in that era?

J.K.: I think for me it was really inspiring. When I moved to Berlin in the mid-90s the “big stuff” was already gone. That feeling of going into a part of the city totally undiscovered and starting up your club [was already gone]. But still I got a last wave probably, like a small last wave and even that wave was exciting and thrilling for me, to see that you could just start up your own exhibition space, or your bar, or your magazine and everybody did that. There was also the internet and everybody was programming, DJing, editing videos, putting out shows. That DIY spirit was really instrumental for us here in Berlin. And because at the time we also got interested in fashion, thanks to a new generation [of designers] like Raf Simons, Helmut Lang, Hedi Slimane, it was kind of different from past generations, we could relate to it, there was a new movement in music and culture and in Berlin it was like an innocent area, because there was no fashion industry, there was no fashion scene so you projected a lot of these stuff on [fashion].

WWD: 032c started with a DIY approach and then evolved into a platform with several branches in merch and consulting. How are those branches performing? Is there anything more in the pipeline in terms of diversification?

J.K.: I think what’s interesting is that since we’ve always analyzed our role within the industry, within media, it became at some stage really apparent that all brands were becoming media on their own, so if media just stays media, it’s kind of like deadman walking.

Also at that time 032c was set up as a brand that aspired to be much more than just a print magazine but we never found the perfect avenue to do this. There was of course the lucky coincidence that the woman I married [Maria Koch] is a fashion designer and so we really started going this route. We started ultra-simple with bootleg T-shirts, then built up the team, had the Pitti presentation, did shows in London and Paris and we have a big team of probably 12 people by now working in the fashion [division], so it’s now set up like a proper ready-to-wear brand. If you come from doing media or print, you are absolutely amazed by the profit rates in fashion. We’re like in 80 stores worldwide and all the great stores, we’re really happy about it.

WWD: Since you launched a ready-to-wear line, do you see 032c more as a media company or a fashion brand?

J.K.: I think that we don’t see us as a traditional media brand; I think we’re in the process of transforming at the intersection of fashion, media and technology. Whether you call it a new type of media brand or fashion brand, we don’t know, it’s like a hybrid. And for me it’s exciting because nobody has done that before.

WWD: Are there any plans in the pipeline to further expand the 032c universe?

J.K.: We always had our office windows filled with exhibitions and then we opened up a vodka bar and we did big shows with people like Juergen Teller, Alasdair McLellan, Helmut Lang. Nowadays we can’t do that in our offices because there are too many people and we can’t close down the office for two days. But we miss that spirit and we’re going to do a big development in the center of Berlin, which hopefully will work out as a restaurant, exhibition space, gallery, a bar and so forth. It’s like going really very much into offering a complete experience of 032c.

WWD: Experience is the holy grail for fashion brands. Is this the route fashion media should embrace, too?

J.K.: The problem is that very generally speaking, media has lost its confidence and there is no need for media that has no real point of view or a strong outlook on something, like a critical attitude. If you just want images, if you just want good vibes everybody can deliver that better than traditional media. 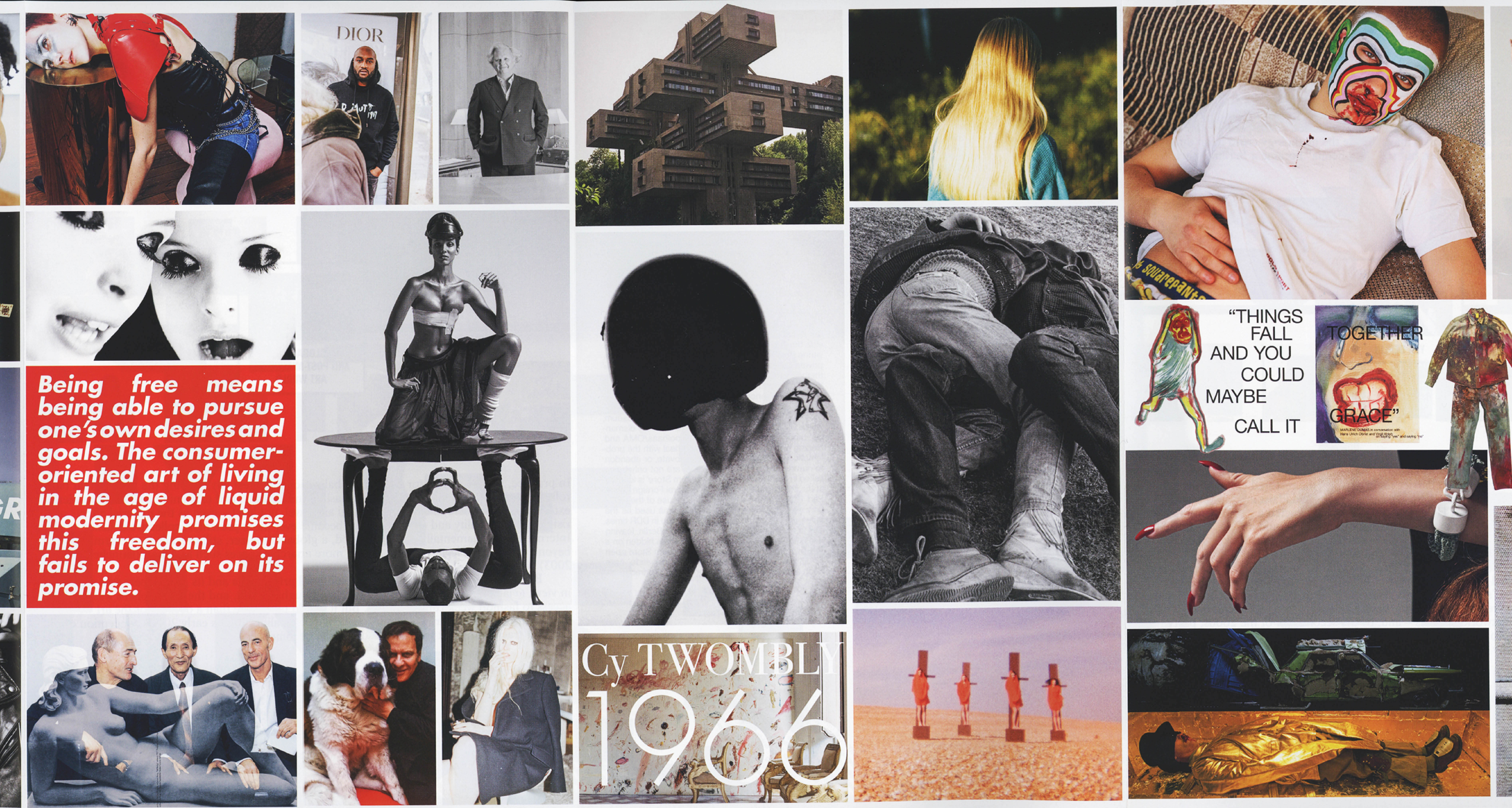 A visual fold-out compendium of imagery from past 032c issues. Courtesy of 032c.

WWD: How did you keep up throughout all these years providing compelling content that readers and customers would want to read and buy?

J.K.: We’re obsessive, we really love what we do. I am one of the happiest guys around, because I can do exactly what I want and I think if you really care for the job you do, people will realize it, it’s that simple I would say.

We have a great team and a great network; we don’t want to disappoint the expectations of people. If you are selling a magazine in the U.S. or in Tokyo that costs like 20 euros to 25 euros, you’d better deliver, you don’t want to waste the readers’ time and resources. We’re quite serious about the work we do. The year 2020 was the best so far in terms of magazine revenues despite the pandemic. We didn’t see any decline. The market now realizes that there is real value in publications that offer a cultural context.