The Biden administration is relying on Congress instead of just the Fed to fix the economy. That mix could lead to a less wealth-unequal future. 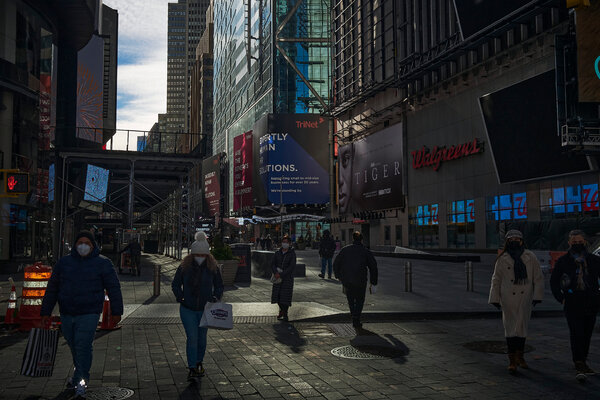 By Jeanna Smialek and Jim Tankersley

The coronavirus pandemic has threatened to rapidly expand yawning gaps between the rich and the poor, throwing lower-earning service workers out of jobs, costing them income, and limiting their ability to build wealth. But by betting on big government spending to pull the economy back from the brink, United States policymakers could limit that fallout.

The $1.9 trillion economic aid package President Biden signed into law last month includes a wide range of programs with the potential to help poor and middle-class Americans to supplement lost income and save money going forward. That includes monthly payments to parents, relief for renters and help with student loans.

Now, the administration is rolling out additional plans that would go even further, including a $2.3 trillion infrastructure package and about $1.5 trillion in spending and tax credits to support the labor force by investing in child care, paid leave, universal prekindergarten and free community college. The measures are explicitly meant to help left-behind workers and communities of color who have faced systemic racism and entrenched disadvantages — and they would be funded, in part, by taxes on the rich.

Forecasters predict that the government spending — even just what has been passed so far — will fuel what could be the fastest annual economic growth in a generation this year and next, as the country recovers and the economy reopens from the Covid-19 pandemic. By jump-starting the economy from the bottom and middle, the response could make sure the pandemic rebound is more equitable than it would be without a proactive government response, analysts said.

That’s a big change from the wake of the 2007 to 2009 recession. Back then, Congress and the White House passed an $800 billion stimulus bill, which many researchers have concluded did not do enough to fill the hole the recession left in economic activity. Lawmakers instead relied on the Federal Reserve’s cheap-money policies to coax the United States’ economy back from the brink. What ensued was a halting recovery marked by climbing wealth inequality as workers struggled to find jobs while the stock market soared.

“Monetary policy is a very aggregated policy tool — it’s a very important economic policy tool, but it’s at a very aggregated level — whereas fiscal policy can be more targeted,” said Cecilia Rouse, who chairs the White House Council of Economic Advisers. In the pandemic crisis, which disproportionately hurt women of all races and men of color, she said, “If we tailor the relief to those who are most affected, we are going to be addressing racial and ethnic gaps.”

From its first days, the pandemic set the stage for a K-shaped economy, one in which the rich worked from home without much income disruption as poorer people struggled. Workers in low-paying service jobs were far more likely to lose jobs, and among racial groups, Black people have experienced a much slower labor market rebound than their white counterparts. Globally, the downturn probably put 50 million people who otherwise would have qualified as middle class into lower income levels, based on one recent Pew Research analysis.