As the pandemic enters its second year, millions of renters are struggling with a loss of income and with the insecurity of not knowing how long they will have a home. Their savings depleted, they are running up credit card debt to make the rent, or accruing months of overdue payments. Families are moving in together, offsetting the cost of housing by finding others to share it.

The nation has a plague of housing instability that was festering long before Covid-19, and the pandemic’s economic toll has only made it worse. Now the financial scars are deepening and the disruptions to family life growing more severe, leaving a legacy that will remain long after mass vaccinations.

Even before last year, about 11 million households — one in four U.S. renters — were spending more than half their pretax income on housing, and overcrowding was on the rise. By one estimate, for every 100 very low-income households, only 36 affordable rentals are available.

Now the pandemic is adding to the pressure. A study by the Federal Reserve Bank of Philadelphia showed that tenants who lost jobs because of Covid-19 had amassed $11 billion in rental arrears, while a broader measure by Moody’s Analytics, which includes all delinquent renters, estimated that as of January they owed $53 billion in back rent, utilities and late fees. Other surveys show that families are increasingly pessimistic about making their next month’s rent, and are cutting back on food and other essentials to pay bills.

On Friday, as monthly jobs data provided new evidence of a stalling recovery, President Biden underscored the housing insecurity faced by millions. The rental assistance in his $1.9 trillion relief plan, he said, is essential “to keep people in their homes rather than being thrown out in the street.”

Bobbing above the surface of a missed payment, the most desperate are already improvising by moving into even more crowded homes, pairing up with friends and relatives, or taking in subtenants.

That is the case with Angelica Gabriel and Felix Cesario, residents of a two-story apartment complex in Mountain View, Calif., largely inhabited by cooks and waitresses and maids and laborers — the kinds of workers hit hardest by the pandemic.

With their incomes reduced, Ms. Gabriel, a fast-food worker, and her husband, a landscaper, recently moved out of the bedroom they shared with their two youngest children, 6 and 8. They now rent the bedroom to a friend of a friend, while the couple and the kids sleep on a mattress in the living room. (Two daughters, 14 and 20, continue to share the other bedroom.)

The arrangement has kept them current by bringing in $850 toward the $2,675.37 monthly rent, which Ms. Gabriel reeled off to the penny.

“We weren’t able to pay the rent by ourselves,” she said in Spanish. “Suddenly the hours fell. You couldn’t pay, buy food.”

Such changes are not directly reflected in rent rolls or credit card bills, but various studies show that disrupted and overcrowded households have a host of knock-on effects, including poorer long-term health and a decline in educational attainment.

Reflecting the broader economy, the pain in the U.S. housing market is most severe at the bottom. Surveys of large landlords whose units tend to be higher quality and more expensive have been remarkably resilient through the pandemic. Surveys of small landlords and low-income tenants show that late fees and debt are piling up.

One measure of relief came when Mr. Biden extended — by two months — a federal eviction moratorium that was scheduled to expire at the end of January, as states and cities also moved to extend their own eviction moratoriums. In addition, $25 billion in federal rental aid approved in December is set to be distributed.

But for every million or so households who are evicted in the United States each year, there are many more millions who move out before they miss a payment, who cut back on food and medicine to make rent, who take up informal housing arrangements that exist outside the traditional landlord-tenant relationship.

“What happens in housing court will miss most of the people who need help,” said Davin Reed, an economist at the Federal Reserve Bank of Philadelphia.

While rents have fallen in many big cities, vacancy rates for the cheapest buildings are essentially flat from last year, according to CoStar Group, a commercial property group. That is: Nothing about Covid-19 has changed the fact that there is a longstanding shortage of affordable housing, so anyone who loses an affordable home will still have a hard time finding a new one.

And in the same way that subprime mortgages were an early indicator of the mid-2000s housing crisis, today informal renters — roommates and sublessors who don’t have a proper lease — offer a look below the surface. Low-income and frequently undocumented immigrants, these tenants find apartments through word of mouth, social media and Spanish-language news sites, where single-room dwellings (“I rent a room with a bed for $400”) are a staple of the classified advertisements. 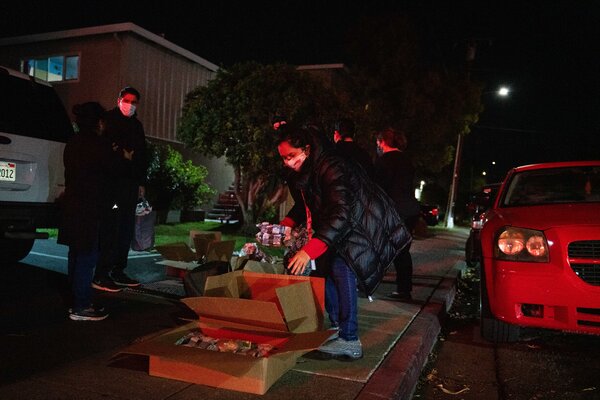 Kaitlin Heinen, a staff attorney at the Housing Justice Project in Seattle, said that over the past few months she had seen a marked increase in “unauthorized occupant” cases, in which a landlord seeks to evict someone for allowing an off-the-books roommate into the unit. Claas Ehlers, chief executive of Family Promise, a homeless-prevention nonprofit that has more than 200 affiliates in 43 states, said people without leases constituted an outsize share of the group’s requests for rental aid and assistance.

It is a world of cash rent and oral agreements that are unstable and easily torn — a big reason that various studies show informal tenants are more likely to become homeless.

Let Us Help You Better Understand the Coronavirus