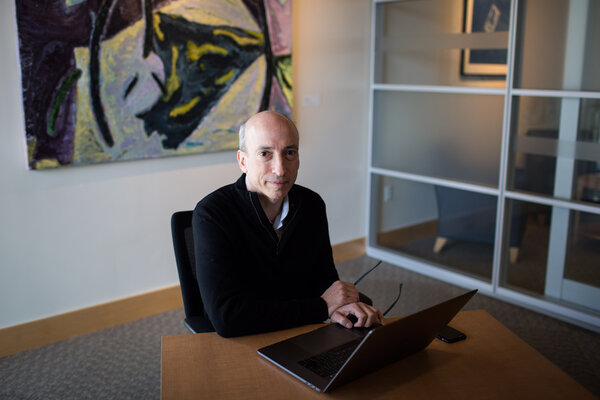 Five potential focuses for the next S.E.C. chair

The Biden administration is set to tap Gary Gensler, a former financial regulator and Goldman Sachs banker, as head of the Securities and Exchange Commission, multiple outlets are reporting.

The Senate runoff elections in Georgia make it easier to go with a progressive pick like Mr. Gensler, because Democrats have a better shot at confirming such nominees. Mr. Gensler has led the transition team’s reviews of the Fed and of banking and securities regulators since November.

If approved, Mr. Gensler is expected to rein in Wall Street, building on his work as head of the Commodity Futures Trading Commission from 2009 to 2014. At the C.F.T.C., he pushed for more transparency around derivative trading and was at the forefront of uncovering interest-rate rigging by traders, which resulted in big fines in a number of settlements with banks. “Wall Street’s interest is not always the same as the public’s interest,” he told The Times in 2010.

He has an insider perspective on the financial industry, given his nearly 20 years at Goldman before going into public service. That undercuts the criticism that financiers have leveled at some progressive picks rumored to be in the running for economic roles in the Biden administration.

Here’s what the next S.E.C. chief might focus on:

Requiring companies to disclose their political donations publicly, in a standardized way, an issue that Democrats were pushing even before it became the biggest business story of the day.

Formulating clearer rules on cryptocurrencies and the blockchain, an issue that Mr. Gensler is uniquely qualified to address, having taught courses about digital money at M.I.T. the past few years.

What do you think the next S.E.C. chairman’s priorities should be? Let us know at [email protected]. Include your name and location, and we may feature your response in a future newsletter.

The House is set to vote on impeaching President Trump. After Vice President Mike Pence rejected a demand to invoke the 25th Amendment, House lawmakers will debate an article of impeachment this morning and could vote on it late today. Some Republicans support the move, including Representative Liz Cheney and, privately, the majority leader Mitch McConnell, according to people familiar with his thinking.

The Trump administration shifts its vaccine strategy. Officials instructed states to begin vaccinating all Americans 65 and older, as well as those with certain underlying medical conditions, to speed up immunization efforts. Some worry, however, that the move could sow confusion. In other coronavirus news, all travelers entering the U.S. will be required to provide evidence of negative tests.

Democrats forge ahead on additional stimulus. As President-elect Joe Biden prepares to unveil a pandemic relief plan on Thursday, Senator Chuck Schumer — who is set to become majority leader — said the Senate would prioritize legislation that would contain money for vaccine distribution and additional $1,400 checks for Americans.

Visa walks away from its takeover bid for Plaid. The payments giant abandoned its $5.3 billion bid after the U.S. Justice Department sued to block the deal, arguing that it would harm competition.

Google is funding an advocacy group for “Dreamers.” The tech giant’s nonprofit arm will donate $250,000 to United We Dream, which will pay the fees for more than 500 undocumented immigrants to apply for work authorization under the Deferred Action for Childhood Arrivals program. The window for applications may be short, with a federal court in Texas currently considering a challenge by nine states seeking to end the program.

The latest in corporate reactions to the Capitol insurrection

Walmart is indefinitely halting contributions to lawmakers who voted against certifying the 2020 election results, two days after saying it would review its political donation policies. The move is particularly notable given that its C.E.O., Doug McMillon, also heads Business Roundtable, an influential trade group.

The U.S. Chamber of Commerce condemned President Trump’s incitement of the mob that stormed the Capitol and said that its powerful political action committee would drop support for lawmakers who backed efforts to discredit the presidential election.

The C.E.O. of MyPillow, Mike Lindell, is one of the few corporate leaders to publicly stand by Mr. Trump: He has continued to promote baseless claims about election fraud and the perpetrators of the Capitol rampage.

Amazon responded to a lawsuit by the social media platform Parler, which accused the tech giant of antitrust violations in cutting off web hosting services. In a court filing, Amazon cited over 100 examples of violent content on Parler, including threats against public officials and warnings of more mayhem around the inauguration on Jan. 20.

“Wall Street doesn’t get to run this entire economy.”

— Senator Sherrod Brown, Democrat of Ohio, on his agenda when he takes over as chairman of the Senate Banking Committee. Among his priorities, he told reporters including The Times’s Emily Flitter, will be to expand housing and banking services for low-income Americans and address climate and racial equality.