A self-driving motorcycle wouldn’t make much sense, but the industry is starting to adopt some safety technology from cars.

The first car with adaptive cruise control was the 1994 Mitsubishi Diamante. So why has it taken more than 25 years for the feature to appear on motorcycles? There were technical and ergonomic challenges, for starters, and some motorcyclists view it as a technological nanny or even an additional danger.

The feature is now familiar to many car drivers, but it represents a quantum change in the advanced rider assistance systems available on bikes. For the first time, motorcycles now invite riders to turn both throttle control and braking over to an onboard computer.

In October, Ducati announced that its 2021 V4 S model would come with adaptive cruise control. A week later, BMW announced that the feature would be available on its coming R1250RT. Next spring, riders will be able to let these motorcycles — using data from a forward-facing radar sensor — speed up and slow down on their own to match the flow of traffic.

The technology didn’t come easy to motorcycles. The hardware is a tricky fit on a handlebar, especially when buttons must be manipulated while wearing gloves. And adding even a few ounces to such high-performance machines is anathema to engineers and designers.

Because riders are not securely belted in position like car drivers, it’s important that they’re not thrown off balance when the motorcycle speeds up or slows down, especially if they’re already leaning into a corner.

Last but not least, many riders are philosophically opposed to ceding control; they enjoy the challenges and sensations of controlling their machine. Commuting by car is a chore for many drivers, so outsourcing a little control is welcome. But for motorcyclists, even riding in traffic is fun.

Ducati is owned by Audi, and BMW sells more cars than motorcycles, so both companies tapped years of automotive experience. Both worked closely with Bosch, which already had a suitable radar sensor, developed for use on compact cars. The two motorcycle makers’ systems are functionally similar but not identical. The most obvious difference is that Ducati’s front-facing radar is paired with an additional rear-facing sensor that provides blind-spot detection.

The hardware may be automotive, but the software is motorcycle-specific and took years to perfect. “The physics of a motorbike are totally different,” said Reiner Fings, director of product development for BMW’s R series motorcycles. “The system must able to detect cars and other motorcycles while it is leaned over.”

That ability is only one of the differences. Many car systems work even in stop-and-go traffic, but because motorcycles don’t have automatic transmissions, they could stall or even fall over if the technology were allowed to bring them to a complete stop. So the Ducati and BMW systems are designed for use only at speeds above about 20 miles an hour.

Using buttons on the left handgrip, riders can choose a desired speed (up to 100 m.p.h.) and a following distance. The system software then determines what vehicle, if any, it should follow. (If there’s no vehicle ahead, the motorcycle accelerates to the preset speed, as with normal cruise control.) 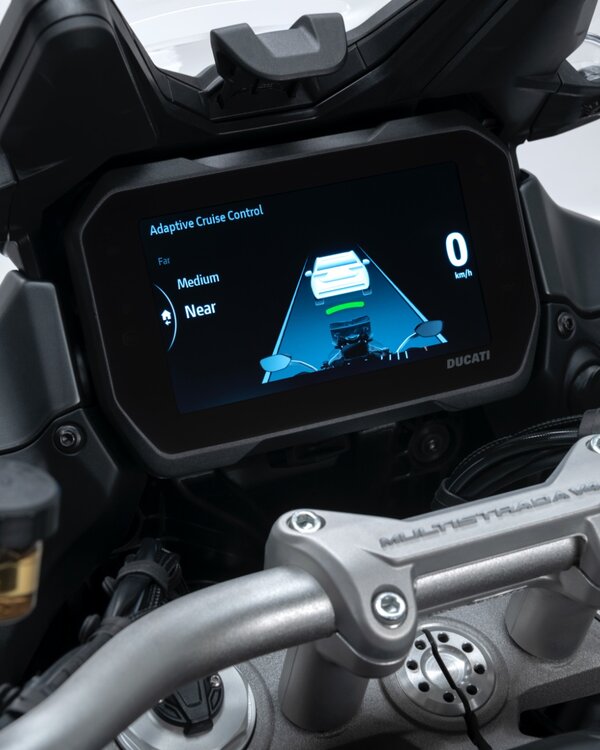 One crucial engineering challenge was ensuring that when the cruise systems speed up or apply the brakes, it’s done smoothly and gradually — especially when the motorcycles are leaned over in a turn.

This is a real concern in the marketplace. The popular Common Tread blog was one of the first to confirm that the new Ducati would come with adaptive cruise control. One reader commented, “Hell no. … I also drive a new Mercedes and a few times, it has caught me off guard and slammed on the brakes! If that had happened on one of my motorcycles, don’t know what would have happened.”

Both manufacturers’ systems slow down on their own if lean angles exceed certain thresholds. (Perhaps unsurprisingly, the racing-obsessed Italians designed theirs to work at lean angles up to 50 degrees, at which point most riders would be dragging a knee.)

So what happens if a vehicle the motorcycle is following suddenly slows down and the cruise system can’t maintain a safe following distance? When that happens, the motorcycles flash a “take over request” on the dash and the rider must take over braking or take other action to avoid getting too close.

These first motorcycle adaptive cruise control systems are not to be confused with Automatic Emergency Braking. This tech is already common in automobiles but years in the future for motorcycles.

Davide Previtera, Ducati’s project manager for the development of the Multistrada V4S, emphasizes that adaptive cruise control “is a convenience system, not a safety system; it is there to enhance comfort during highway travels.” The radar systems only recognize vehicles traveling in the same lane and direction. They will not brake or respond at all if you come across a vehicle that is stopped in your path.

Although no American riders have experienced adaptive cruise control yet, they’ve already expressed plenty of skepticism. Another commenter on the Common Tread blog wrote, “The main reason I ride is the challenge of riding on two wheels and arriving safely due my own skills. … I like relying on my ability to shift, brake, corner and accelerate on my own.”

That’s an opinion familiar to Mr. Fings at BMW. He said, “They might say, ‘It’s too much electronics, too many things I don’t need for motorcycle riding.’”

He was a skeptic, too. “I thought, I know how to cruise, I can open and close the throttle by myself. But once you understand how it works, that keeping a safe distance to the car in front no longer needs to be a main focus, you have more of your attention available for other things happening on the road around you. You can relax and have more fun.”

Ducati and BMW think that’s a concept American motorcyclists will get behind.