Its first print incarnation since 2017 includes an article on New York’s mayoral race, and another that revives the paper’s tradition of shaming landlords. 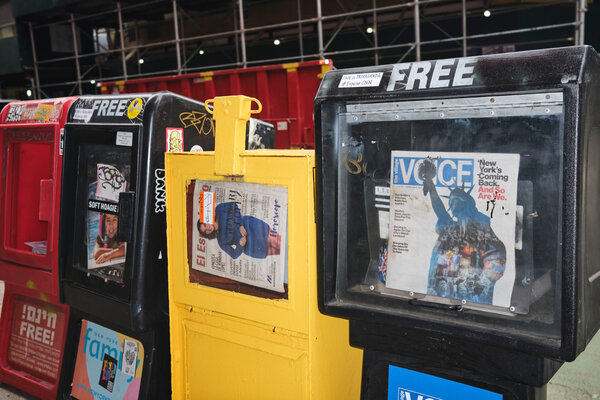 New Yorkers may have noticed something strange in the last few days: copies of The Village Voice, fresh off the press and still free, on newsstands and in street boxes.

“It all makes sense,” said the longtime Voice columnist Michael Musto, who has a byline in the return issue. “New York is back, The Voice is back, I’m back.”

The new issue, which came out on Saturday, is the first print incarnation of the storied independent publication since August 2017, when its previous owner, Peter D. Barbey, took it digital-only a year before shutting it down. Brian Calle, the publisher of LA Weekly, bought The Voice in December and revived its dormant website in January.

“For us, putting a print issue out was a stake in the ground,” Mr. Calle said. “It really makes the relaunch of The Village Voice real in a way it wasn’t before.”

He plans to publish a print issue about four times a year, he added, meaning that a famed alt-weekly is now an alt-quarterly. The end goal is to publish monthly.

The comeback issue includes an article by the former Voice reporter Ross Barkan on the New York mayoral race, and one by Eileen Markey that revives the paper’s tradition of shaming the city’s landlords.

Mr. Musto wrote on his Oscar predictions. It’s his second return to The Voice. He was laid off in 2013, brought back in 2015 and sent packing once more, along with his colleagues, at the time of the 2018 shutdown.

Mr. Calle said he had not appointed an editor in chief, but was having conversations with people as he rebuilt the newsroom. R.C. Baker, a longtime Voice writer, has taken the role of senior editor.

After The New York Times reported the sale of The Voice last year, some journalists expressed concerns about Mr. Calle as the proprietor of the downtown paper, which was founded in 1955 by Dan Wolf, Edwin Fancher and Norman Mailer. Mr. Calle was previously an opinion editor at The Orange County Register in California and a vice president of the Claremont Institute, a conservative think tank, and his tenure at LA Weekly has been marked by boycotts led by former writers for the publication and a lawsuit filed by an investor.

Mr. Musto said Mr. Calle was a fan of the paper’s old spirit. “He wants The Village Voice in all of its old, spunky, lefty history,” he said. “The new issue, to me, looks very Village Voice-y.”

Mr. Calle said anyone concerned about the latest iteration should read it and “judge for themselves.”