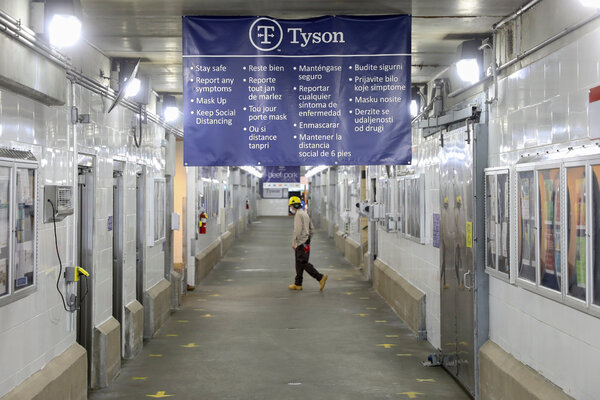 Tyson Foods, one of the nation’s largest meat processors, said on Tuesday that it would require vaccines for its U.S. workers — about half of whom remain unvaccinated.

The mandate will extend to employees in its offices and in the field. The poultry supplier is requiring its leadership team to be vaccinated by Sept. 24 and the rest of its office workers by Oct. 1. Frontline employees have until Nov. 1 to be fully inoculated, extra time the company is providing because there are “significantly more frontline team members than office workers who still need to be vaccinated,” a Tyson spokesman said.

Tyson is offering $200 to frontline workers who verify that they are fully vaccinated. The company already offered employees up to four hours of pay if they are vaccinated outside of their normal shift. Any new employees must be vaccinated before they start work, Tyson said.

Tyson, which is based in Springdale, Ark., is still negotiating the matter with its unions, which represent about one third of its hourly work force.

“We did not take this decision lightly,” the company’s chief executive, Donnie King, wrote in a memo to employees announcing the news. “We have spent months encouraging our team members to get vaccinated — today, under half of our team members are.”

To date, more than 56,000 of Tyson’s U.S. 120,000 employees have been vaccinated. Tyson, which had about $43 billion in sales in 2020, is the largest meat and poultry processor in the United States, according to Statista.

Companies, jolted by the Delta variant and eager for a return to normal, have announced a steady drumbeat of vaccine mandates for their employees over the past several weeks. But in the private sector, these requirements, which have come from Facebook, Google and Walmart and others, have so far largely focused on office workers rather than the more vulnerable frontline workers. Labor shortages that have affected industries including retail, restaurants and meatpacking have complicated the decision, which has been made more difficult by the economic divide separating those who have been vaccinated and those who have not.

The meatpacking industry has been hit hard by the coronavirus, given the close working conditions the job requires. And Tyson has come under fire for its lapses in safety standards, including allegations it failed to provide adequate safety equipment and refusing the requests of local officials to close a plant.

The meatpacker is based in Arkansas, where about 46 percent of the adult population is fully vaccinated. It has plants across the country, including in Georgia, Kansas, Missouri and Texas.

Tags: coronav, Vaccines Immunization
You may also like
Recent News: