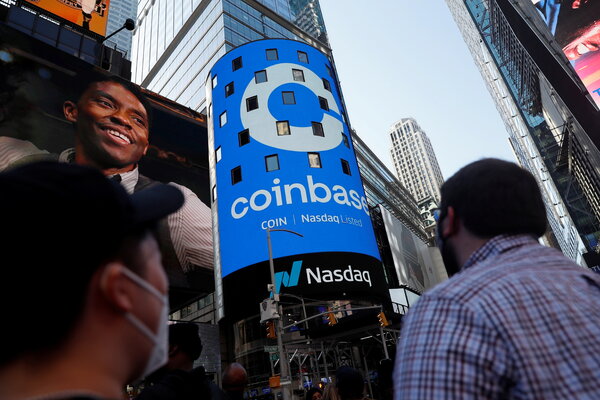 Heavy trading volume greeted the highly anticipated market debut of Coinbase, which ended the day worth some $86 billion. The cryptocurrency company’s coming-out party made some insiders very rich, opened up new possibilities for cementing its position in the blockchain economy and blazed a trail for other crypto companies to follow its lead onto the public markets.

Meet the latest crypto billionaires. The stake held by Brian Armstrong, Coinbase’s co-founder and C.E.O., is now worth roughly $13 billion. Shares held by its other co-founder, Fred Ehrsam, are worth about $6.7 billion. (Andreessen Horowitz’s stake is worth $11.2 billion, while Union Square Ventures’ is worth $5.3 billion.)

What’s next for Coinbase? “We want to be able to have a public mark on our stock price because it helps us do more and more M.&A.,” Emilie Choi, the company’s C.O.O., told Protocol yesterday. “There’s so much innovation happening in the crypto ecosystem, and we can’t possibly do it all in-house.”

The listing also brings more scrutiny of the company’s internal culture, which has included accusations of unfair treatment of Black and female employees and poor customer service.

Who will be the next publicly traded crypto giant? The tech investor Ron Conway called Coinbase “the Google for the crypto economy.” As crypto goes mainstream, others with similarly big ambitions may follow Coinbase onto the public markets, including:

Rival markets like Binance, the biggest crypto exchange (provided it can address some regulatory issues), and Gemini, the company founded by the Winklevoss twins.

E.T.F.s that hold Bitcoin and other cryptocurrencies directly. They still haven’t been approved by the S.E.C., but proponents believe that will happen soon — and will further boost the value of digital currencies like Bitcoin (and the value of Coinbase, to boot).

Just for fun: Here’s Mr. Armstrong’s original Hacker News post from March 2012 looking for a co-founder for his crypto venture, which drew dismissive comments like, “Because bitcoin worked out so well. Have fun with that, dude.” Bitcoin was worth about $5 then; it’s more than $60,000 now.

The Senate confirms Gary Gensler as S.E.C. chairman. The former Goldman Sachs executive and Obama administration financial regulator passed 53-45. He is expected to take a more aggressive approach to enforcement than his predecessor, Jay Clayton, and — based on what he taught as an M.I.T. professor — will make fintech and blockchain among his focuses.

Dell will finally spin out its majority stake in VMware. Under the terms of the long-anticipated deal, Dell will distribute its holdings in the business software maker to its shareholders, while collecting a roughly $12 billion special dividend. Investors have pushed for such a move to boost valuations of both Dell and VMware.

The C.D.C. prolongs the pause on Johnson & Johnson’s vaccine. An advisory committee for the health agency said it needed more time to assess the Covid-19 shot’s safety; it won’t vote on a recommendation for at least a week. Separately, concerns about the J&J and AstraZeneca vaccines mean the E.U. will increasingly rely on the Pfizer-BioNTech shot for its inoculation plans.

Bank of America continues a bumper bank earnings season. It reported a doubling of first-quarter profit from a year ago, following a similar pattern to the huge gains in earnings released yesterday by JPMorgan and Goldman Sachs. For big banks, a rebound in core Wall Street businesses has combined with the release of billions in reserves to cover loan losses, a sign of bullishness on post-pandemic economic life.

Televisa and Univision dominate two of the biggest Spanish-language broadcasting markets, the U.S. and Mexico. In striking a $4.8 billion deal to combine their media, content, and production assets, they are adapting to a future where streaming is king, their leaders told DealBook.

“We’re creating the first and really only truly global Spanish-language television business,” Wade Davis, Univision’s chief, said, noting that the companies have been largely regional and, until recently, focused on broadcast TV. That might be OK for now — Univision’s ratings went up last year, Mr. Davis said — but the real opportunity is in the nascent market for Spanish-language streaming, with just 10 percent of the world’s 600 million Spanish speakers subscribing to a service.

Investors appear to like the deal, with shares in Televisa jumping 23 percent on the news. The big question is whether Televisa-Univision, as the combined business will be called, can compete with behemoths like Netflix that are also betting on global markets and non-English programming. Mr. Davis argued Televisa-Univision’s greatest advantage is that it’s exclusively focused on the Spanish-language market — but it’s still much smaller than its streaming rivals, and it’s coming late to the game.

“Every aspect of human existence is going online, and every aspect of that is running on semiconductors. People are begging us for more.”

— Pat Gelsinger, the C.E.O. of Intel, on the global chip shortage sending shock waves through the economy.

How big can a SPAC get?

The answer, in short, is as big as a financier can dream. This week, a blank-check firm that raised $500 million in its I.P.O. got $4 billion in additional funding from private investors to merge with Grab in a deal worth $40 billion. That’s a difference of nearly 8,000 percent between the cash in the SPAC and the value of the company that will take over its listing. It’s the largest ratio on record, according to data from SPAC Research.

The size of a SPAC is only loosely related to that of the target it seeks. Additional funding these companies arrange alongside a merger allows them to take on bigger targets, and the bigger the target, the less dilutive the SPAC sponsor’s stake in the combined entity, making it more attractive to other shareholders. So far this year, the value of announced SPAC mergers has been more than 800 percent larger, on average, than the cash in the SPACs; that’s up from roughly 600 percent last year and 400 percent in 2019.

More than 400 SPACs now seeking acquisitions are together sitting on $140 billion, so applying the current ratio implies a potential deal value of $1.3 trillion, roughly the value of all M.&A. deals in the U.S. last year. (Using Grab’s outsize ratio, it would be a whopping $11 trillion.)

Jon Kelly, a former Vanity Fair editor, plans to launch a new media company with an unusual business model, Ed Lee and DealBook’s Lauren Hirsch report for The Times. The venture has raised about $7 million from investors, including the private equity firm TPG. Notably, it will pay its yet-to-be-named writers a portion of the subscription fees they personally generate, creating a compromise between the dominant business models of old and new media companies.

Upstart media brands are betting on star power to drive subscriptions. Mr. Kelly’s new venture, which may be called Puck, the name of an American humor magazine of the late 1800s and early 1900s, plans to use its revenue-sharing model to attract big-name writers. The push to “monetize individuality” has attracted increasingly high-profile figures to new platforms: Substack offers lucrative contracts to select writers who use it to launch newsletters.

Established companies rely more on prestige, breadth and experience. The largest media companies lean on their brands to attract both talent and subscribers.

It gets murky in the middle. Digital media players like BuzzFeed, Vice, Vox Media and Group Nine rely more on ads than subscriptions, and they’ve stumbled as the pandemic has ravaged that industry. In an increasingly crowded, differentiated field, they’re trying to bulk up via mergers or go public to raise funds and satisfy early investors.

Bernie Madoff, architect of the largest Ponzi scheme ever, died in a federal prison hospital yesterday at the age of 82, while serving a 150-year prison sentence. Here’s what he left behind:

$64.8 billion in paper losses, including the fictional profits he credited to customer accounts over at least two decades. Though $14 billion has been recovered since Mr. Madoff’s 2008 arrest, it doesn’t make up for the enormous profits his investors thought they had made over the years.

An embarrassed S.E.C., which unsuccessfully investigated more than a half-dozen credible tips about Mr. Madoff’s fraud since at least 1992. The scandal did not result in legislation but did lead to some reforms, including at the enforcement division.

AppLovin, a mobile app and gaming company backed by KKR, raised $2 billion in its I.P.O., valuing it at $28 billion. (Reuters)

The retailer Kohl’s settled with activist investors, adding three directors to its board while keeping its C.E.O. in place. (WSJ)

Hedge funds reported their best first quarter in two decades, despite the meme-stock short squeeze, the collapse of Archegos and more. (FT)

Reid Hoffman on why business leaders should speak out on “the contradictions and absurdities in so-called ‘voting reform’ efforts across the country.” (LinkedIn)

A recent focus group of swing voters said it would back only bipartisan legislation for infrastructure spending — paid for with tax hikes on corporations, not the middle class. (Axios)

How Amazon uses its vast business empire as leverage over corporate partners. (WSJ)

An in-depth look at how Jack Ma ran afoul of Beijing, and put his business empire in peril. (FT)

Did the Trump administration inadvertently put GPS at risk? (WaPo)

In a new study, women reported higher levels of fatigue from video calls than men. (NYT)

“How Working From Home Changed Wardrobes Around the World” (NYT)

Tags: Virtual Currency;Cryptocurrenc
You may also like
Recent News: