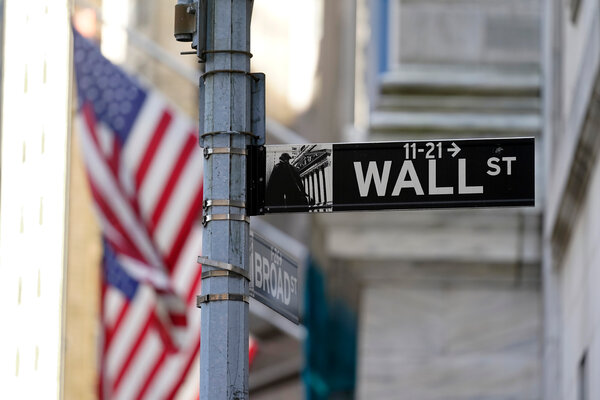 The job of a banker, an old joke goes, can be summed up by the 3-6-3 rule: Gather deposits at 3 percent, lend them out at 6 percent and be on the golf course by 3 p.m. These days, banks pay next to nothing in interest, yet they are awash in deposits. They also offer loans at rock-bottom rates, yet see little demand from borrowers. What are they doing with the money instead? Bingeing on bonds, The Times’s Matt Phillips reports.

(And as for golf? Tee times have been harder to get lately, so that may be the only part of the joke that still has some truth to it.)

U.S. banks bought a record $150 billion in Treasury bonds last quarter, hugely expanding their holdings relative to the new loans they have written. When the economy is growing, like now, banks usually have no problem finding borrowers: These loans provide banks with higher returns than parking their money in low-yielding government bonds. But with loan demand remaining sluggish, lenders are reluctantly buying bonds guaranteed to generate skimpy returns.

The bond-buying spree explains some of the recent quirks in markets:

Why are bond yields so low? A drop in yields usually signals slower growth ahead, which seems at odds with what’s happening now. The stock market set yet another record high yesterday. This has led some to conclude that the bond market is broken. But as long as banks have few better alternatives, their bond purchases will drive up prices and push down yields, which could explain why yields seem out of whack with the rest of the economy.

Has government stimulus had an effect? The lackluster demand for loans, in part, reflects the success of stimulus preventing more widespread ruin. During the pandemic, the government gave $830 billion in stimulus checks to individuals, as well as $570 billion in enhanced unemployment benefits. That allowed many people to pay down debt, or at least not take out new loans. The $800 billion Paycheck Protection Program also artificially propped up small-business lending during the worst of the pandemic.

Credit trends also raise questions about the economic recovery. Low interest rates didn’t stop lending when the economy was strong before the pandemic. Uncertainty about the effect of the rapidly spreading Delta variant of the coronavirus, which affects supply chains, the labor supply and more, could over time become the primary reason that people and businesses seem so reluctant to borrow, despite conditions that would normally be conducive to doing so.

In the latest reading of its U.S. economy recovery tracker, Oxford Economics said that progress had stalled at about 96 percent of prepandemic levels and “gains will be harder to come by as we move past peak growth.” Five of the six components in its weekly index of activity fell, with financial conditions — reflected by stock market gains and low interest rates — the only one sending a different signal than the others.

Goldman Sachs will require coronavirus vaccination for anyone who enters its U.S. offices. The bank set a deadline of Sept. 7, saying yesterday that anyone who does not get the shot by then must work from home. (The mandate also applies to outside visitors to its offices.) Several universities, including Ohio State, Louisiana State and the University of Minnesota, also announced vaccine mandates for students, faculty and staff, citing the F.D.A.’s full approval of the Pfizer-BioNTech vaccine this week.

The House narrowly passes a $3.5 trillion budget blueprint. Progressive and moderate Democrats overcame their differences to pass the framework for a bill (over united Republican opposition) that would pave the way for a vast expansion of social safety net and climate programs. As part of the compromise, House leadership committed to a vote on the $1 trillion bipartisan infrastructure package by Sept. 27.

Afghanistan faces an enormous economic shock. The former head of the country’s central bank warned in an opinion article for The Financial Times of an imminent financial and humanitarian crisis after the Taliban takeover. The World Bank halted payments on $800 million in aid committed to Afghanistan this year, after a similar move by the I.M.F. last week.

Supply chain issues spell trouble for the food sector. Labor shortages at some of the largest food distributors in the U.S. are causing problems for stores with delivery delays, empty shelves and higher prices for key items. In Britain, truck driver shortages have resulted in some branches of McDonald’s running out of milkshakes and in the chicken-chain Nando’s suffering a shortage of a crucial item: chicken.

Kathy Hochul says the buck stops with her. In her first one-on-one interview after becoming New York’s governor, Hochul told The Times that she would adopt a less top-down style than her predecessor Andrew Cuomo. (“It’s consultation with the locals, and then the buck stops with me,” she said.) When asked if she would use her influence on the redistricting process to help get more Democrats elected to the House, she answered directly: “Yes. I am also the leader of the New York State Democratic Party. I embrace that.”

The trendy eyewear brand Warby Parker has filed for a direct listing on the N.Y.S.E., disappointing bankers who for years had been chasing the eagerly anticipated I.P.O. The filing comes as a number of other online retail brands, like Allbirds and Fabletics, are preparing market debuts as tech companies and consumer names are in high demand. Warby was last valued at about $3 billion in the private market.

Warby Parker is growing quickly — and losing money. It reported revenue of $270 million in the first half of this year, up more than 50 percent from the same period last year, which was dented by store closures during the pandemic. Its first-half loss narrowed to around $7 million, from $10 million last year. Warby said it now generates about half of its sales online and half in its 145 stores. It has plans to open more across the country.

More time on Zoom is good for business. In laying out the state of the eyewear market, Warby highlighted the effect that growing screen time has on eye health. “The rising usage of smartphones, tablets, computers and other devices has contributed significantly to increased vision correction needs and consistent new customer growth within the eyewear market,” the company said.

It’s registering as a public benefit corporation, a designation granted to companies that take a wide range of stakeholders into account as part of their corporate missions. (In Warby’s rundown of risks for investors, the company warned that “our duty to balance a variety of interests may result in actions that do not maximize stockholder value.”) While some companies that went public with such designations have stumbled, like Etsy, the rising interest in E.S.G. investing has made it increasingly popular.

“If you really want to make the markets safer, rather than puffing up your chest and posturing to or with Wall Street, talk to small investors about what they want to see and how they want to be communicated with.”

— Mark Cuban, the billionaire investor, takes aim at Gary Gensler, the S.E.C. chairman, on Twitter. Cuban’s tweet was in reply to a general warning from Gensler that his agency, which has unsuccessfully sued Cuban in the past, would go after people who make use of loopholes and legal tricks that violate the spirit of securities laws.

Antitrust experts are split over what competition policy can (and should) accomplish. Those who support the status quo view monopoly through a lens of consumer welfare, focusing on price effects. Those who push for change — including the Biden administration — argue that corporate concentration causes many social harms that can’t be measured by prices alone. One of the ill effects is an erosion of democracy, according to a new report.

“Corporate concentration and antidemocratic political influence go hand in hand,” wrote Reed Showalter, a fellow at the American Economic Liberties Project, a progressive nonprofit. He told DealBook that he spent two years examining data on three powerful sectors that spend big on lobbying — internet companies, pharmaceutical manufacturers and oil and gas firms — and found that once markets got less competitive, spending on political influence increased. “The more market power a corporation acquires, the more it lobbies,” he wrote.

Monopolies have the time and money to spend on influence. A “tentative conclusion” of his research, Showalter said, is that “monopolies seek to acquire political power, whereas competitive businesses focus on competing.” This is data-driven evidence that “competition is important writ large,” Showalter said, suggesting that antitrust officials might consider the effect of potential monopolists on representative democracy when reviewing deals.

The report drops some notable names. Showalter’s report begins with an interesting acknowledgment, thanking Tim Wu, a former Columbia law professor who is now a technology and competition policy adviser at the White House. What’s more, Showalter works at the law firm founded by Jonathan Kanter, whom President Biden recently nominated to lead the Justice Department’s antitrust division. Showalter said that Kanter did not discuss the report with him and that his work as a fellow was separate from his day job. But he acknowledged more generally that the expansive approach to antitrust that his report advocated appeared to be ascendant in the halls of power.

The private equity giant TPG has hired Goldman Sachs and JPMorgan Chase to underwrite its I.P.O. as it presses ahead with a long-anticipated listing. (WSJ)

TikTok is adding in-app shopping for the first time in a pilot partnership with the e-commerce platform Shopify. (NYT)

Apollo is raising money to invest in SPACs. (Reuters)

Sweetgreen is acquiring Spyce, a robotics-focused food tech firm, in a bet that automated kitchen technology will help the salad chain scale up. (Insider)

Johnson & Johnson will share new data with the F.D.A. that the company said showed that a booster of its one-shot coronavirus vaccine generated a strong immune response. (NYT)

Businesses that list their vaccine policies on Yelp are getting hit with negative “review bombings.” (WSJ)

BlackRock’s former head of sustainable investing on why E.S.G. is a “dangerous placebo that harms the public interest.” (Medium)

Almost half of 18- to 34-year-olds who received government stimulus money invested some of it in stocks, funds or crypto. (CNBC)

Cotton tote bags aren’t as eco-friendly as they seem. (NYT)