Merchandise with phrases like “Battle for Capitol Hill Veteran” could still be purchased on major e-commerce sites, a sign of how the platforms have struggled to remove the goods. 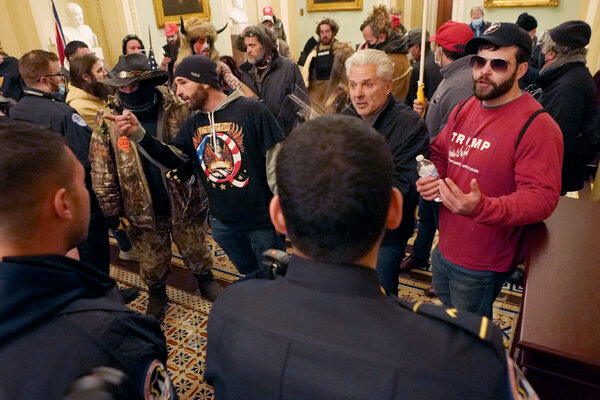 By Sapna Maheshwari and Taylor Lorenz

The day after the violent attack on the Capitol, Shopify declared that it had removed e-commerce sites affiliated with President Trump, including his official campaign store. The sites had violated a policy that prohibited the support of groups or people “that threaten or condone violence to further a cause.”

The move was initially lauded but it soon became clear that the technology company, which powers more than one million online shops, was still fueling plenty of other sites with merchandise promoting the president and goods emblazoned with phrases like “MAGA Civil War.” Apparel with similar phrases and nods to QAnon conspiracy theories also remained available on e-commerce sites like Amazon, Etsy and Zazzle.

Even as the companies scrambled to remove such merchandise, new goods commemorating and glorifying the Jan. 6 attack were proliferating. As of Friday, “Battle for Capitol Hill Veteran” shirts with drawings of the Capitol building could be purchased on Amazon for $20, Etsy was selling a “Biden Likes Minors” shirt that mimicked the look of “Black Lives Matters” signs and Zazzle had a “Civil War 2020” shirt on its site. Etsy and Zazzle have since removed the merchandise; the “Capitol Hill Veteran” shirt was still available on Amazon on Monday. 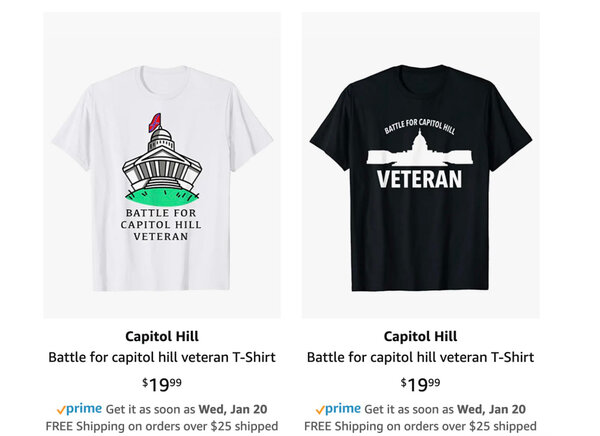 Just as the violence put new scrutiny on how social media companies were monitoring speech on their platforms, it also highlighted how e-commerce companies have enabled just about anyone with a credit card and an email address to sell goods online.

These companies have largely been built with scale and ease of access in mind, with scant oversight of what vendors were actually selling. But questions about the businesses have emerged as many rioters donned what amounted to a type of uniform that could be purchased online. This included shirts with certain phrases or illustrations printed on them, and flags that not only supported President Trump, but promoted a civil war, conspiracy theories and debunked election claims. One shirt infamously worn by one of the rioters that said “Camp Auschwitz” was later found on Etsy, prompting an apology from the company, which is known for handcrafted goods.

“There’s so much focus on Twitter, Facebook, and YouTube, but, in our view, the platforms are much, much wider than social media,” said Danny Rodgers, chief technology officer and co-founder of the Global Disinformation Index, a nonprofit focused on the spread of falsehoods online. “There’s a broad diversity of platforms that support and enable these dangerous groups to exist, to fund raise, get their message out. It’s not just kicking people off social media, it’s kicking people off merchandising platforms.”