The bull market is one year old. Can it last? 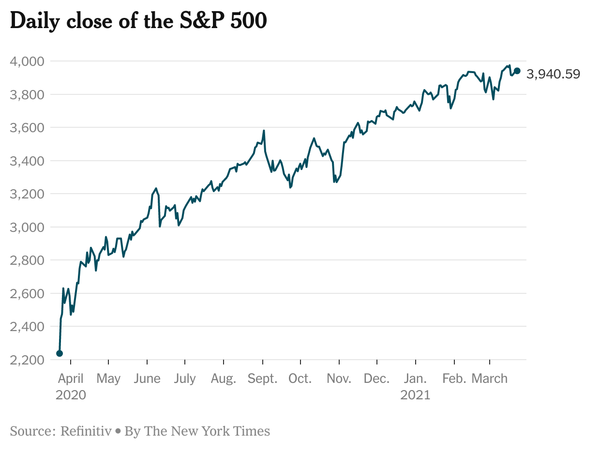 The bull market is now a year old, with the S&P 500 up nearly 75 percent from its low point at this time last year. That recovery, The Times’s Matt Phillips writes, is “a testament to the unbridled enthusiasm that let investors shrug off the economic carnage of the pandemic and buy stocks — and pretty much anything else.” The factors that have stoked the rally also raise questions about whether it can last.

Is this a bubble?

Analysts are wary of using the B-word to describe the market as a whole, despite the best 12-month stretch for stocks since the 1930s. But John D. Turner, a finance professor who wrote “Boom and Bust: A Global History of Financial Bubbles,” is convinced: “If I had to put money on it, it looks like a bubble,” he told The Times. A bubble has three key ingredients, he said: ease of trading, access to credit and mass speculation — all of which are in ready supply. All that’s missing is a spark. What could it be?

Can retail traders keep this up?

A surge in individual traders — who have access to commission-free online trading apps, government “stimmy” checks and lots of downtime — has become one of the biggest forces in stock markets. A big test of this trend’s durability will come if and when Robinhood, which filed confidentially to go public yesterday, begins trading itself. Can the brokerage — whose C.E.O. faced tough questions from lawmakers and several lawsuits over its halting of trades — endure the scrutiny of public market investors when it opens its books?

What’s going on at GameStop?

Few investors beyond true believers think that the surge in the video game retailer’s stock — which was up 1,700 percent at one point in January — is justified by the fundamentals of its business. That’s why the company’s first earnings release since the frenzy was a hotly anticipated event on Tuesday. Attendees left with plenty of unanswered questions, mainly because GameStop executives provided no financial guidance and, unexpectedly, skipped a Q.&A. Here are a few:

The company said it would consider selling stock “to fund the acceleration of our future transformation initiatives.” With shares up some 900 percent from a year ago, there is scope to raise a huge amount. How ambitious will it be?

There has been a lot of executive turnover at the company. Is that also happening lower in the ranks, perhaps in part because employees can cash out their suddenly more valuable shares?

The Chewy co-founder Ryan Cohen, who joined GameStop’s board along with two other former Chewy executives just before the frenzy, said he aimed to turn the retailer into the “Chewy of gaming.” What do pet supplies have in common with video games?

If you have answers — or more pertinent questions about this moment in the markets — let us know: [email protected]

The E.U. plans to curb vaccine exports for six weeks. The bloc has drafted emergency rules to ease its supply shortages, a move that could badly affect Britain and other countries. Separately, AstraZeneca said it planned to disclose more recent trial data about its vaccine to assuage U.S. officials’ concerns.

Tags: Gun control, Stimulus, US Econom
You may also like
Recent News: