Among the first students to receive an envelope containing their GCSE results in the socially-distanced assembly hall at Burnage Academy for Boys in Manchester was Wahajat Khan, 16. He had spent the last few weeks playing cricket in a bid to distract himself from the exams crisis dominating the headlines.

He achieved seven 9s (equivalent to an A**) and two 8s (A*) in his centre-assessed grades, meaning he will be accepted for a bursary to study A-levels in Biology, Chemistry, Physics and Maths at the private Manchester Grammar school in September.

“I’m just delighted. I feel like these were probably the grades I was going to get anyway, but I got higher than I expected in English,” said Wahajat, as his dad, Farooq Shah, who had taken the day off work as a taxi driver to be there, beamed beside him.

Like many students at the school – which serves an area with pockets of high deprivation with a large BAME population – the government’s dramatic U-turn over the use of a controversial algorithm to predict grades came as a huge relief for Wahajat. “The teachers here have been working with us for the last two years, so they know what to expect from you,” he added. 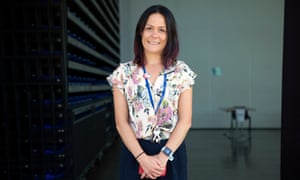 Last week, his sister Amna received three distinctions in her BTec results and will take up a pharmacy course at University College London in the autumn.

“Last week we were celebrating for my daughter, this week there’ll be celebrations for Wahajat,” said Shah, 40, as he posed for photographs with his son.

Despite being pleased that the results had not been calculated using the algorithm, the deputy headteacher, Helen Carter, said the turmoil had left her feeling “flat”.

In previous years, the school’s exams performance has been in the top 3% for boys at non-selective schools in the north- west of England, and without the scrapping of the algorithm, Carter believed grades could have taken a significant downturn. 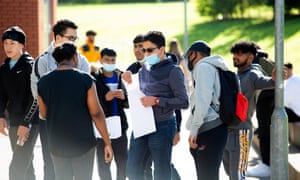 On Thursday, marks received by pupils based on recommendations by teachers were in line with previous years.

“I was really fearful that the algorithm was going to be detrimental because we’re teaching pupils many of whom are from deprived areas,” said Carter.

“It may look like some of the grades across the country have been inflated, but it isn’t comparable to last year. These children have been through enough.”

“The whole process has been appalling,” she added. “Teachers are best placed [to predict results], they know their students inside out, they know their individual circumstances. To say an algorithm can do it is insulting to the profession.”

But with exams unable to go ahead this year, not everyone was satisfied with their predicted grades. Among them, Wasay Butt, 16, who admitted that he hadn’t taken mock exams – which were factored into results – very seriously, even going as far as to take a nap in some.

Nassir Obeid, 16, who has been working as a trainee mechanic at a garage over the past few months, also felt that if he had taken exams he would have passed with 7s (As) rather than 5s (B/C).

“After the mocks, I was putting in long hours of studying every day and then lockdown happened and it messed up the whole system that I had going,” he said.

He is also still awaiting a BTec result in engineering, that will allow him to take up a place to continue his studies at Connell Co-op College in Clayton. “That’s the result I actually really need,” he added. The exam board responsible for the qualifications performed its own U-turn on Wednesday, announcing it would also use school assessments to determine marks.

Mohammed Atif, 16, who received an exceptional eight 9s and one 8 in his GCSEs, said he had concerns over whether future universities and employers would be dismissive of results that weren’t obtained through end-of-year exams.

“I think a lot of people are worried – because we’re the Covid year of results – that that might downgrade the value of our results, which is a bit sad.

“But at the same time [universities and employers] must understand that it was an odd year that we’ve been through, so I don’t think that should hinder the value of our grades that much.”

Tags: Education, Exams, GCSEs, Manchester, Schools, UK news
You may also like
Recent News:
This website uses cookies to improve your user experience and to provide you with advertisements that are relevant to your interests. By continuing to browse the site you are agreeing to our use of cookies.Ok