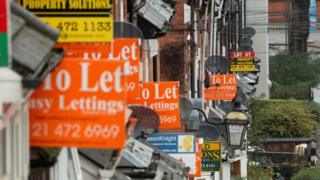 A judge has ruled that blanket bans on renting properties to people on housing benefit are unlawful and discriminatory.

The “momentous” court ruling found a single mother-of-two had experienced indirect discrimination when a letting agent refused to rent to her.

She ended up homeless with her two children, when her case was taken on by housing charity Shelter.

The judge ruled “No DSS” rental bans are against equality laws.

Previously cases backed by Shelter – and first reported by BBC News – have established that “No DSS” landlords and agents are guilty of indirect discrimination, but the cases were settled before any court heard them in full.

In February 2018, single mother Rosie Keogh won compensation for sex discrimination from a lettings agency that refused to consider her as a tenant because she was on state benefit, but the case was settled out of court.

District Judge Victoria Mark heard this latest case in York County Court on 1 July, and ruled: “Rejecting tenancy applications because the applicant is in receipt of housing benefit was unlawfully discriminating on the grounds of sex and disability”.

And this was, therefore, contrary to the Equality Act 2010, she said.

Polly Neate, chief executive of Shelter, said: “This momentous ruling should be the nail in the coffin for ‘No DSS’ discrimination.

“It will help give security and stability to people who unfairly struggle to find a place to live just because they receive housing benefit.”

Single mother, Jane (not her real name) had been looking for a new home on October 2018 after being subject to a “no fault” eviction by her previous landlord.

She said: “I was shocked and found it very unfair that they wouldn’t even give me a chance.

“I had excellent references from both my landlords of the last nine years as I’ve always paid my rent on time and I had a professional guarantor.

“I could have paid up to six months’ rent in advance because my parents lent me the amount.

“When the letting agent wouldn’t take me because of a company policy, I felt offended that after all those years when I have prided myself on paying my rent, paying my bills, being a good tenant, it just meant nothing.

“When I realised I was going to be homeless because I couldn’t find anywhere, I felt sick to my stomach.”

The letting agent in the case cannot be named for legal reasons.

The successful case is the latest step in the charity’s End DSS Discrimination campaign to stop the practice, which excludes thousands of people from renting homes each year – and the charity hopes the ruling will send a clear message that landlords or agents who continue to refuse to rent to housing benefit claimants risk legal action.

The legal action was also supported by the Equality and Human Rights Commission, the Nationwide Foundation and barrister Tessa Buchanan at Garden Court Chambers.

A survey for the charity conducted by YouGov in December 2019 and January 2020 found nearly two-thirds of private landlords either do not, or prefer not to, let to people on housing benefits.

Rose Arnall, the Shelter solicitor who has led the charity’s legal challenges on the issue, said: “This is the first time a court has fully considered a case like this.

“It finally clarifies that discriminating against people in need of housing benefits is not just morally wrong, it is against the law.

“This sends a huge signal to letting agents and landlords that they must end these practices and do so immediately.”

Responding to the ruling, Chris Norris, policy director at the National Residential Landlords Association, said: “No landlord should discriminate against tenants because they are in receipt of benefits.

“Every tenant’s circumstance is different and so they should be treated on a case by case basses based on their ability to sustain the tenancy.”

But he added that the government could support tenants by ensuring benefits covered rents entirely.

Minister for rough sleeping and housing Luke Hall said the government had been working with landlords and letting agents to ensure tenants are treated on an individual basis and that benefits are not a barrier.

He added: “Everyone should have the same opportunity when looking for a home and discriminating against someone simply because they receive benefits has no place in a modern hosing market.”

Tags: 'ruled, bans, by, Court, DSS', letting, No, unlawful'
You may also like
Recent News:
This website uses cookies to improve your user experience and to provide you with advertisements that are relevant to your interests. By continuing to browse the site you are agreeing to our use of cookies.Ok