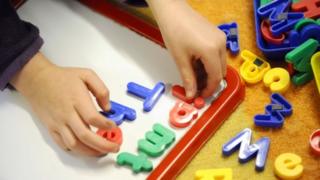 Nurseries are warning of “mass closures” which could leave parents struggling to find childcare when they return to work as the lockdown eases.

England’s early years providers have been operating at 37% of their capacity since early June when they were able to re-open, data analysts Ceeda has said.

Providers will face huge losses if this continues at this rate, it said, and called for the government to step in.

Childcare providers were ordered closed during lockdown until 1 June.

Ceeda data, published by nursery sector body the Early Years Alliance, suggests nurseries are set to lose more than half their funding (55%) for every government subsidised three- and four-year-old place.

For every two-year-old place, they stand to lose 68%.

And modelling suggests problems will continue even if parents start to send their children back in greater numbers.

There are predicted to be significant shortfalls even if occupancy rates rise to 65%.

Nurseries, pre-schools and childminders have been allowed to open to all children since 1 June.

But due to the lockdown, they have had significantly reduced parental demand.

Neil Leitch, chief executive of the Early Years Alliance, said the situation was “simply not sustainable”.

He said: “Even in areas where parental demand for childcare places remains high, providers are currently restricted on how many children they can care for under government guidance, which is going to place even more financial pressure on them over the coming months.

“The early years sector is at a crunch point, and unless urgent action is taken, we are going to see many, many more settings forced to close their doors over the coming months.

“This could mean chaos for parents – and particularly mothers – trying to access childcare in order to return to work at a time when the government is desperately trying to restart the economy.”

Ceeda managing director, Jo Verrill, said there was much rhetoric on the importance of early education, adding: “Now more than ever, this must be matched by investment, if we are to protect the country’s vital early years infrastructure.”

Tags: 'mass, as, closures, lifts, Lockdown, Nurseries, of, warn
You may also like
Recent News: