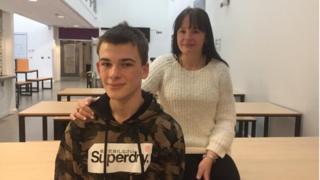 Schools and colleges in England have to submit their estimated grades for GCSE and A-levels by the end of this week.

In each subject, pupils will also be ranked from highest to lowest achieving.

Exam regulator Ofqual has issued extra guidance following a consultation on how to make the process as fair and accurate as possible.

Any pupils unhappy with their grades will be able to sit the actual exam in October or November.

The arrangements, put in place after exams were cancelled in the coronavirus lockdown, are a source of concern for pupils, according to Russell Harrison, a year 11 student at Blacon High School in Cheshire.

“You never know what you could have done in the exam, on the day you could have done better than any of the target grades you’ve been set,” says Russell who, along with half a million other teenagers in England, was due to sit his GCSEs this May and June.

Not doing the exams after the intense focus earlier in the year has been strange, he says.

“This year we had more work, more mock exams, coming into school during the holidays, [and] booster sessions to help get grades up.”

Russell recently had a bursary place at a private sixth-form school confirmed, regardless of his results, funded by the charity Hope Opportunity Trust.

But he says many of his classmates will be worried, especially those unsure of achieving the grade 4 or above they need in maths and English.

His mum, Julie Harrison, says her first reaction when the exams were cancelled was: “Panic, at first.”

She adds: “I thought to myself: ‘What’s going to be happening with the grades?’

“It’s unknown times for everybody, the first time of doing things this way, but once we knew how it was going to be worked out, we were absolutely fine with it.”

For teachers this is an intensely stressful time, having not only to estimate pupil’s grades but to rank each one from top to bottom in every subject.

Blacon High School was rated good by Ofsted for the first time in its history in 2016, and it is now oversubscribed.

More than half the pupils, 55%, qualify for pupil premium funding because at some point in recent years they have been eligible for free school meals.

Headteacher Rachel Hudson says teachers feel a huge responsibility and senior staff have been reviewing decisions on every pupil.

“We all know, despite the two mock exams in November and February, that there are always students who excel at the last moment. It does tend to be boys, so trying to make a judgement holistically is very difficult.”

The hardest judgements are on ranking pupils bunched around the middle grades or on grade borderlines.

Teenagers and their parents will have to wait for results day to know what grades have been submitted by the school.

Like many headteachers in schools which have been working hard to improve, Ms Hudson has to hope and trust the next stage in this new system will be fair.

Once the estimated grades and rankings have been submitted, the exam boards and the regulator Ofqual will compare them with previous years’ exam performance and against national benchmarks, to ensure this year’s results are not wildly out of kilter.

But the process has faced other criticisms.

Prof Kalwant Bhopal, director of Birmingham University’s Centre for Race and Education, is one of a number of academics who wrote to the Department for Education when the plans were announced.

“To put it bluntly, when you look at the demographics of the teaching workforce, 85% of teachers are white – and 93% of headteachers,” she tells BBC News.

She cites a wealth of research showing the impact of unconscious stereotypes in education, particularly in estimating A-level grades, which can be measured against the actual results.

She would have preferred to see independent scrutiny from the outset in the school stage of the process.

Ofqual has issued extra guidance about unconscious bias to teachers after its consultation highlighted the issue as a potential concern.

It consulted a range of bodies including the Equality and Human Rights Commission.

Its advice to schools is that at least two people, including the lead teacher on each subject, should be involved.

A formal declaration has to be signed by the headteacher, saying the estimated grades and rankings are an honest and fair reflection of the grades pupils would have obtained.

Tags: as, estimated, grades, Pupils, submit, teachers, tense
You may also like
Recent News:
This website uses cookies to improve your user experience and to provide you with advertisements that are relevant to your interests. By continuing to browse the site you are agreeing to our use of cookies.Ok