Schools in poor parts of England will struggle the most to help their pupils catch-up after the lockdown, says the Institute for Fiscal Studies.

The last 10 years have seen real-terms cuts amounting to 9% per pupil which fell hardest on schools in the poorest areas, says the IFS.

And schools in poorer areas will get less of a boost from the extra £7.1bn earmarked for schools up to 2022-23.

The government says it is committed to “levelling up” educational opportunity.

But, according to this analysis, schools in poor areas will gain less than schools in more affluent areas from the government’s education spending plans, leaving them “badly placed” to help their pupils catch-up on learning lost during lockdown.

The report authors want to see more of the extra funding targeted at the most disadvantaged areas.

During lockdown the poorest pupils were the least able to access online learning or have quiet places to study and, because of this, IFS Research Fellow Luke Sibieta predicts “a likely widening of educational inequalities”.

“Schools with more deprived pupils have seen the largest falls in spending over recent years and are set to see smaller funding increases than schools in more affluent areas from the government’s new funding formula.

“Most of the Covid catch-up funding will be spread across all schools, regardless of disadvantage.

Overall the extra cash will largely reverse the real-terms cuts of the last decade, and the funding plans will narrow the gap between the best and worst funded parts of the country, says the IFS.

The Department for Education says the lowest-funded schools will receive the greatest increases under its plans.

“We continue to target additional funding through the National Funding Formula for schools with high numbers of pupils from disadvantaged backgrounds.

“Our £1bn Covid catch-up package on top of this is helping level up opportunity for every young person up and down the country,” said the DfE in a statement. 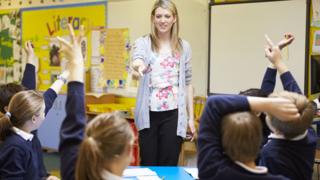 However, the analysis finds that the plans will deliver funding increases of three to four percentage points less to schools in the poorest areas than to those in wealthier areas up to 2021.

It follows a decade in which the funding advantage for schools in deprived areas has shrunk from 35% per pupil to 25%, the analysis found.

The researchers say the government’s National Tutoring Programme for five to 16-year-olds is the only part of the new funding package to be targeted at more deprived schools.

“It is also not at a scale that will allow schools to address the inequalities that have widened during lockdown,” says the IFS.

Josh Hillman, Director of Education at the Nuffield Foundation which co-funded the research said that not only were the most deprived pupils more likely to be behind in their learning “their families are also at greater risk of poverty, food insecurity and job losses”.

“This could further entrench the disadvantage these children face.

“As this research shows, it is therefore crucial that schools in deprived areas receive adequate and well directed funding so tat they can help to close the disadvantage gap and ensure all children can reach their potential.”

“It is also striking that despite government rhetoric of ‘levelling up’ the reverse is true.”

Julie McCulloch, director of policy at the Association of School and College Leaders said that while the £7.1bn in extra funding was welcome it would be “largely absorbed” by rising costs.

She said the government’s refusal to reimburse the “significant costs” of Covid safety measures such as extra cleaning and more staff would put even more strain on budgets leaving even less money to spend on education.

“It is a desperate situation and the government has its head buried in the sand,” said Ms McCulloch.

Tags: areas, cash, catch-up, in, lack, poorer, Schools
You may also like
Recent News:
This website uses cookies to improve your user experience and to provide you with advertisements that are relevant to your interests. By continuing to browse the site you are agreeing to our use of cookies.Ok