In the week leading up to the reopening of Denmark’s schools a month ago, Dorte Lange spent a lot of time on Skype. The vice-president of the Danish Union of Teachers was responsible for detailed negotiations with the education minister, the health authorities and other teaching unions. The aim was to make sure that everyone was happy with the safety measures put in place to ensure an orderly return of younger pupils to classrooms on 15 April.

“As unions, we were taken so much into account and we were consulted so much that we felt quite safe about this,” Lange says. “We said to our members that we think that we can actually trust the authorities and that it will be OK to go back.”

The Danish transition from lockdown to a reopening of schools has become the go-to model for Boris Johnson’s government as it seeks to coax teachers and unions into going back to work from next month.

“Schools have started to return in Denmark and have not seen a negative impact as a result of that,” the secretary of state for education, Gavin Williamson, told unions last week. “This has reconfirmed this approach is the right approach.”

And, indeed, it has been – for Denmark. But does that mean it is necessarily the right one for Britain? Lange says: “The situation in society and with Covid-19 is totally different [in the two countries]. If you, in general, have the experience that you can trust the government and the authorities, then you are more likely to do so.”

When will UK schools reopen – and how will they keep children safe?

The Danish reopening has, so far, been smooth. The country’s R number rose briefly in the two weeks after pupils up to the age of 11 returned, creeping up from 0.7 to 0.9, but it has since fallen back. On Friday, the country passed a major milestone: the first day without a death from coronavirus since March. There were just 137 people being treated in hospital for coronavirus.

The reopening of schools – which has seen classes split in two to keep two metres between each child, more lessons taught outside and a rigorous hand-sanitising regime – has not led to a spike in cases among staff. “We have seen very few incidents where teachers have become ill with coronavirus,” Lange says.

But as well as being one of the first countries to reopen schools, Denmark was also one of the first to close them, with its prime minister, Mette Frederiksen, imposing a lockdown at least a week ahead of the UK.

On 13 March, the day the Cheltenham Festival drew nearly 70,000 people, Denmark closed its borders. It had ordered schools to close two days earlier, and on 17 March, it closed restaurants, bars and most shops, limiting gatherings to 10 people. So, by the time primary schools reopened, the pandemic was already under control, with 200 people being treated in intensive care with coronavirus – about 3.5 for every 100,000 citizens.

There is also a sharp contrast between the acrimonious handling of the negotiations in the UK and those that were held by Lange and others. While the UK government has been wary of sharing the scientific advice it receives, the process in Denmark began with the publication of a report from the country’s infectious diseases agency, SSI. This modelled the likely effect of reopening, based on the assumptions that children spread the infection at the same rate as adults and have no ability to socially distance.

SSI concluded that, although the R number would increase, this was likely to lead to only 264 coronavirus patients in intensive care at any one time.

Teachers’ unions accepted SSI’s conclusions and used them as the basis for the negotiations over guidelines. “We’re not scientists, we’re not professors of epidemiology, so we don’t know anything about that. We have to trust the authorities,” Lange says, adding, however, that she doesn’t blame her British counterparts for acting in the way they have. 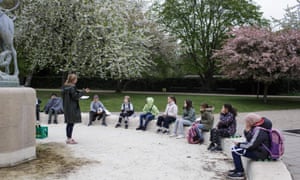 On Friday, she had another Skype call with Denmark’s education minister. This time, it was partly about the return of older pupils tomorrow, which will mean a return to more crowded classrooms. But it was also about how to retain some of the positive aspects of the school regime of the past month.

“We can see now very clearly that smaller groups bring a higher degree of wellbeing for the kids, and give the teachers more contact with the kids during the day,” Lange says.

“We are looking at whether we can continue that, and maybe shorten our school day a bit, with fewer lessons but with a higher degree of contact with students.”

Tags: Coronavirus outbreak, DENMARK, Education, Education policy, EUROPE, Primary schools, Schools, Teaching, Trade unions, World news
You may also like
Recent News:
This website uses cookies to improve your user experience and to provide you with advertisements that are relevant to your interests. By continuing to browse the site you are agreeing to our use of cookies.Ok