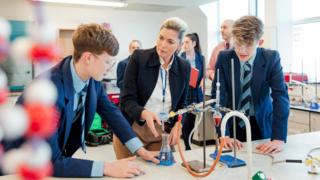 There is “a tsunami of anxiety hitting schools” over what will happen with next year’s GCSE and A-level exams in England, MPs have heard.

The Commons Education Select Committee heard calls for the impact of school closures on next year’s exam candidates to be addressed.

Professor of Social Mobility Lee Elliot Major, called for special arrangements to be made for awarding grades in 2021.

Ofqual told the committee contingency plans were being drawn up.

Most secondary school pupils have been out of school since the end of March.

And on Tuesday, the government announced it was ditching plans to bring all primary pupils back to school for a month before the summer break.

Although some secondary students are due to be invited back for some face-to-face time with their teachers, lessons are not expected to resume until September at the earliest.

There are increasing concerns that schools may still experience disruption, with pupils being offered a mix of online learning and face-to-face teaching throughout the autumn.

Prof Elliot Major, former chief executive of the Sutton Trust education equality charity, said he was “really worried” about the eight million children who are out of school currently.

He said: “There is a tsunami of anxiety hitting schools about the one million children who are going to be taking their GCSEs and A-levels next year.”

He said there needed to be clarity about how public exams would be handled next year, adding that he preferred a combination of exams and teacher assessment.

Sally Collier, chief executive of England’s exams regulator, Ofqual, said planning for the 2021 exams system was at the forefront of her organisation’s thinking.

She suggested the government may be re-thinking the content of exams for next year, and that schools would need to know at the earliest opportunity what they are going to need to teach next year.

Ofqual would be publishing a consultation in the coming weeks on possible measures to ameliorate the impact of educational disruption on next year’s exam candidates, she told MPs.

But she stopped short of saying what those plans included. Reports have suggested Ofqual might be considering delaying exams or using a system involving predictive grades.

“Looking at the exams system, we could face some of this, a very similar situation, next year, we have got to learn from this year,” he said.

Dr Zubaida Haque of the Runnymede Trust, said there needed to be an urgent look at what could be done for pupils who were not going back to school this summer.

She said there were lots of venues available out of school, which could be utilised because of Covid-19 restrictions – such as football stadiums, private schools and golf fields.

She urged ministers to think creatively and urgently about how such facilities could be used, with a view to setting up summer schools to help pupils catch up and support them with pastoral and emotional needs.

Earlier, former Ofsted inspector Sir Michael Wilshaw criticised the government for failing to get pupils back to school.

He said: “The government needs to get its act together… and make sure there is proper planning for September when both primary and secondary schools come back.”

Tags: 'Tsunami, anxiety', Exams, next, of, over, year's
You may also like
Recent News:
This website uses cookies to improve your user experience and to provide you with advertisements that are relevant to your interests. By continuing to browse the site you are agreeing to our use of cookies.Ok