“It was the final straw,” one first-year says.

Students at the University of Manchester say they woke up to find they were surrounded by fencing on Thursday  – the day England went into lockdown – without understanding what was happening.

While protests erupted in the evening and at least part of it was pulled down, students told The Independent the anger that spilled over into the demonstration on campus ran deeper than just the fencing.

“It was about everything, not just the fence, because the university did take it back and say they would take the fence down,” Isabelle Barnes said.

“The protest was about the lack of communication and all the other issues that we are currently experiencing.” 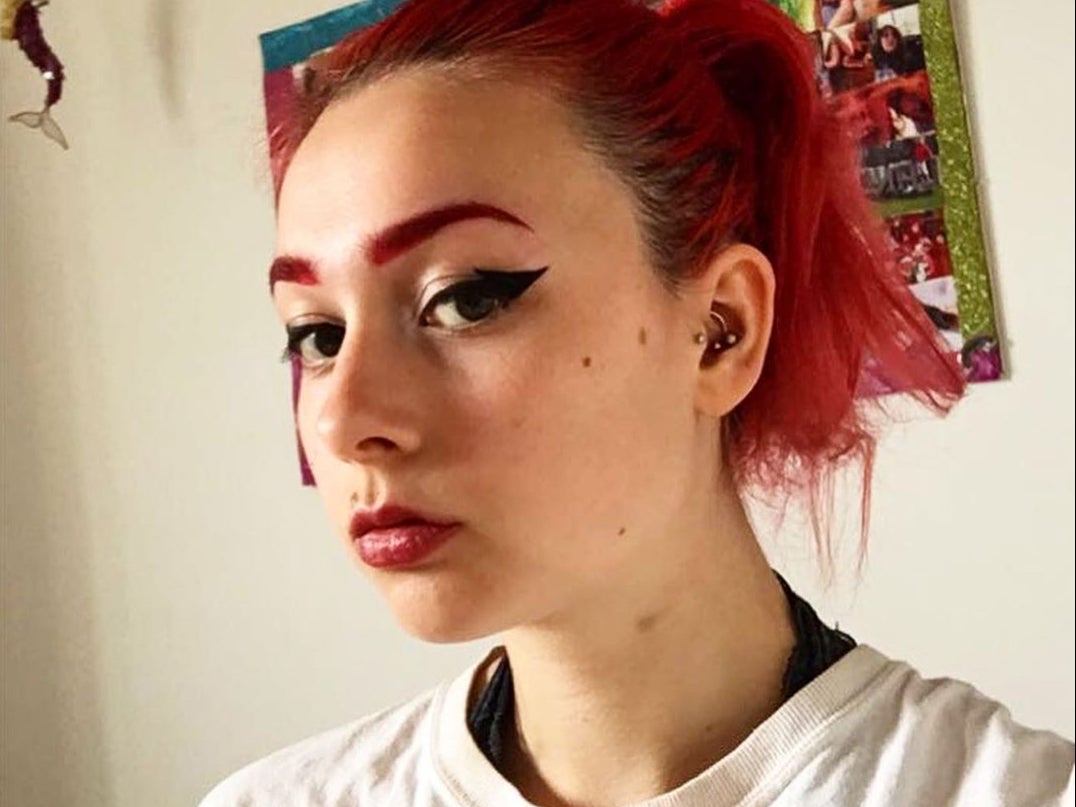 Ms Barnes said one frustration has been finding out tuition would be carried out online after arriving on campus and expecting otherwise – a move other universities have taken this term amid a surge in local coronavirus cases.

“We are stuck in our tiny rooms staring at a screen all day,” the first-year adds.

Megan Richards, another first-year who took part in Thursday’s protest, told The Independent: “It wasn’t just about the fences but that was the final straw.”

She criticised a “general lack of communication” from the university, including food packages she said arrived a week after she started self-isolating over coronavirus. 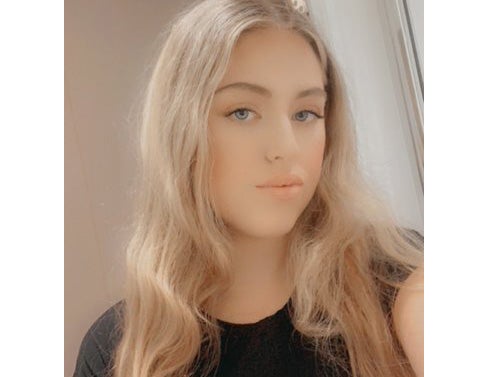 Megan Richards, who protested on Thursday, said there had been a ‘general lack of communication’

Students claimed they received no warning about the fence before waking up to it on the day England’s lockdown started, and had no idea what it was about.

The university said the fencing around Fallowfield halls of residence was removed on Friday, and an inquiry would be held into the decision to put it up and how this was – or was not – communicated to students.

The vice-chancellor said on Thursday it was in response to concerns about non-residents accessing the site, and was not intended to stop students from coming and going.

But the move to remove the fencing did not stop students protesting on campus on Thursday evening, with images showing crowds in face mask, students with loud speakers and a toppled fence.

“Fence is well and truly down at UoM,” one student tweeted as he shared pictures of the demonstration.

However, the protest was “not just about the fencing”, according to a group who had started a rent strike at the university.

“It is about the poor communication, inadequate mental health and isolation support, and the general feeling of profits being put before student wellbeing thought out the whole term,” it tweeted.

Another student, Sofia Gilks, who says she supports the rent strike but missed out on witholding rent at the time, said: “I think, as many people have now said, the events surrounding the fence has been a public display and symbol of what has been happening in Manchester the entire time. 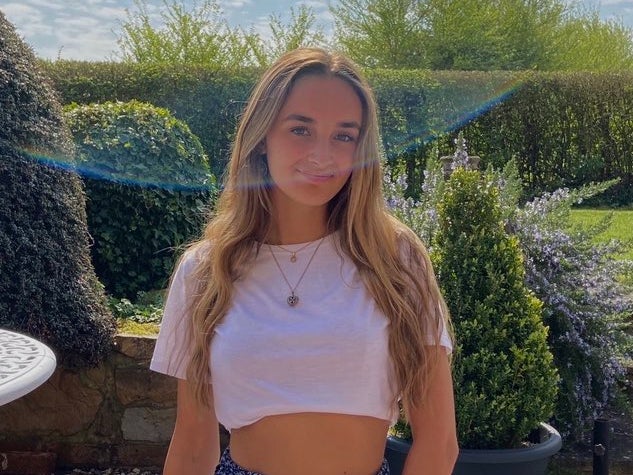 “They make drastic decisions without seeming to stop to think about the impact it’ll have on students.”

The 19-year-old says she wishes there had been greater transparency around the chance all teaching could be pushed online – as happened with her course.

“Many peers agree that had the university admitted they couldn’t guarantee some face to face teaching, they would have thought twice about leaving home and entering in thousands of pounds of debt.”

The University and College Union has urged universities to move all teaching online where possible amid the new month-long lockdown for England.

“Universities must not risk the health and safety of staff and students by allowing non-essential in-person activities to continue,” Jo Grady, the general secretary, said earlier this week.

She added: “Reducing the amount of in-person teaching and travel to and from campus will minimise the spread of Covid-19 and keep people as safe as possible.” 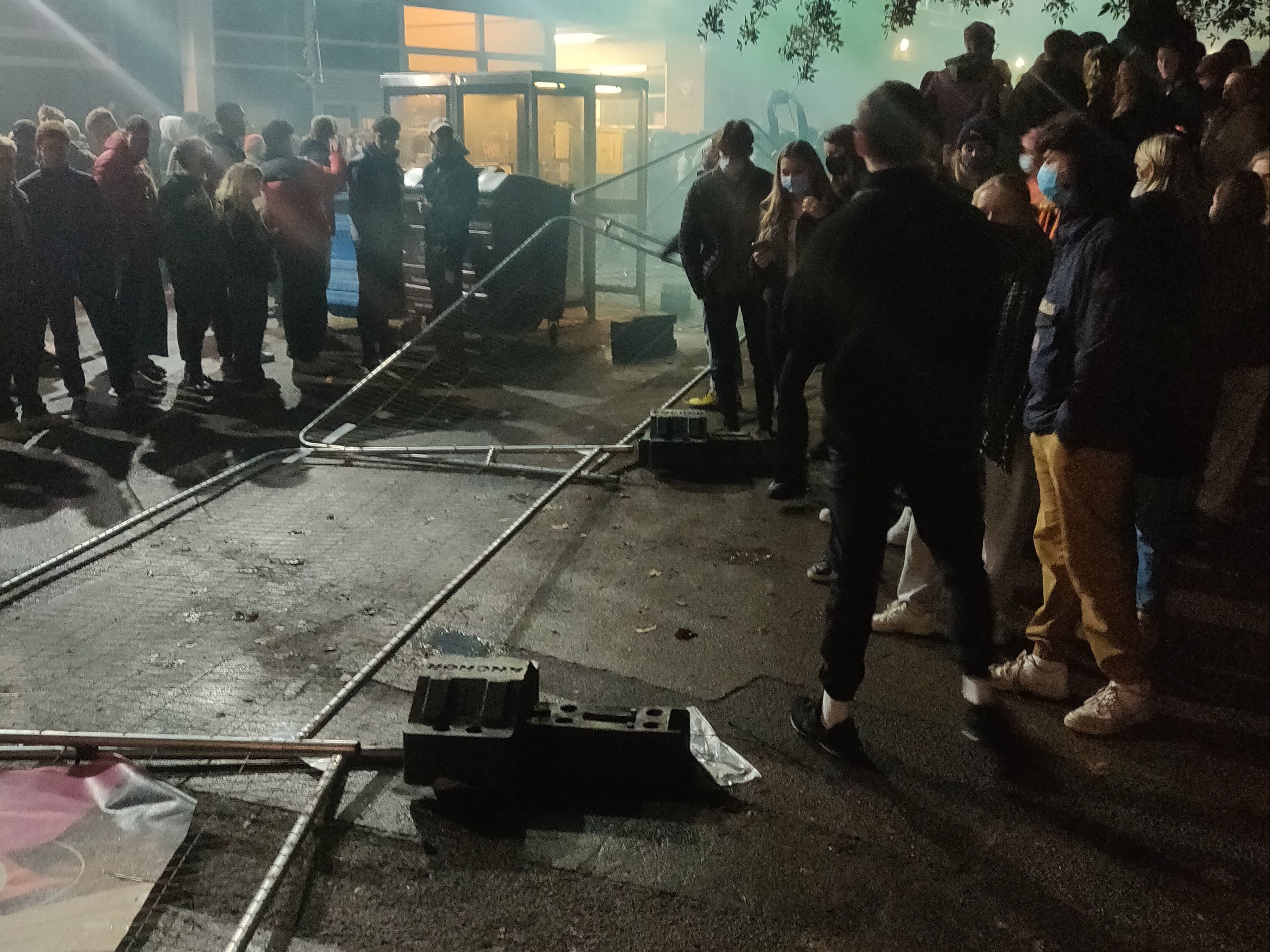 Announcing an inquiry into the fencing around residences on Fallowfield campus, the University of Manchester’s vice-chancellor said: “Firstly, I want to apologise again for the distress caused by putting up the fence yesterday and the very poor communication surrounding this.

“I am determined to find out what went wrong and to learn from it. As a matter of urgency, I have commissioned an inquiry into these events.”

Professor Dame Nancy Rothwell added the inquiry will “examine how and, for what reasons, the decision to erect the fence around the residences on the Fallowfield campus was taken and how this decision was – or wasn’t – communicated to students”.

She said: “I know the events of yesterday were distressing for many students on a personal level at what is already a very difficult time. I’m sorry for that. I also regret that our actions led to protests and unrest at the residences last night.”

The fences were put up around the outside of the campus, with security checks on the way in and between blocks.

The University of Manchester said the fencing cost £11,000 for four-week hire, installation, inspection and removal of 534 metres.

The vice-chancellor said the fences were taken down on Friday and additional security measures would be implemented in consulation with students for the safety of residents.

Tags: Students, University Of Manchester
You may also like
Recent News:
This website uses cookies to improve your user experience and to provide you with advertisements that are relevant to your interests. By continuing to browse the site you are agreeing to our use of cookies.Ok