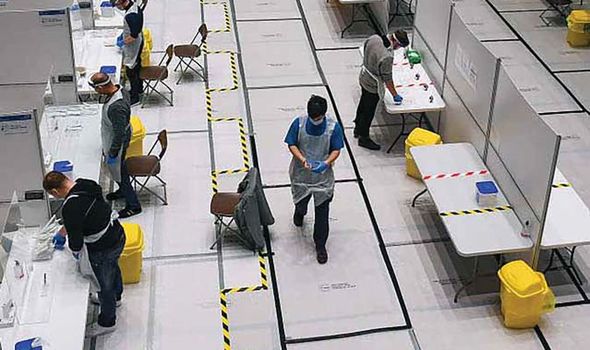 Vets, energy workers and staff in pharmaceuticals, telecoms, chemicals, communications, water, space, fish, veterinary medicine and HMRC are also being prioritised. Daily contact testing was increased with 1,200 new sites across frontline sectors. With more than one million people believed to be self-isolating, there will be 2,000 sites across the country.

The Government announced last week that some staff in some critical sectors would be exempt from having to self-isolate for 10 days if they are “pinged” as a close contact of a positive coronavirus case.

They are subject to daily Covid-19 testing, allowing them to continue to go to work.

Thousands of business, train services and food supply firms have been clobbered by people being forced to quarantine.

Health and Social Care Secretary Sajid Javid said: “As we learn to live with the virus, we will keep doing everything in our power to break chains of transmission.

“Daily contact testing will play a vital role in this, helping minimise the potential for disruption caused by rising cases, while keeping staff protected.”

The announcement came as Boris Johnson warned the UK is “not out of the woods yet”, despite Covid cases falling for the sixth day in a row.

Cases plummeted by 38 percent to 24,950 yesterday from 39,950 a week ago, fuelling hopes that the third wave may have peaked weeks earlier than expected.

It was the lowest figure since early July ‑ before cases rocketed as people crowded together in pubs, bars and homes to watch Euro 2020 matches.

Daily cases are now falling or levelling off in every region of England.

The North-east, a hotspot for the Delta variant, was the first to see its outbreak peak on July 14, according to the data.

His deputy official spokesman said: “Throughout the pandemic we have always said it’s encouraging when cases are falling”. However, he warned, the pandemic “is not over” and “we should still expect to see a rise in case numbers given the move to Step 4 last week”.

He added: “The PM thinks we’re not out of the woods yet.”

The effects of July 19’s Freedom Day on transmission won’t be felt until later this week due to the lag between someone catching and testing positive for the virus.

And there are growing concerns that the vaccination programme has stalled among young people, with a third of those aged 18 to 29 not having had their first dose.

Also, the number of patients in hospital with Covid-19 in England has risen above 5,000 to its highest level for more than four months.

A total of 5,055 patients were in hospital on July 26, said NHS England ‑ up 33 percent from the previous week.