A-level and GCSE students in Wales will get their exam results as predicted by teachers instead of an algorithm, after the controversial system was scrapped.

It follows the earlier announcement in Northern Ireland that GCSE marks due to be released on Thursday will be graded in the same way, while A-level pupils will have to keep the marks they were handed by the system. 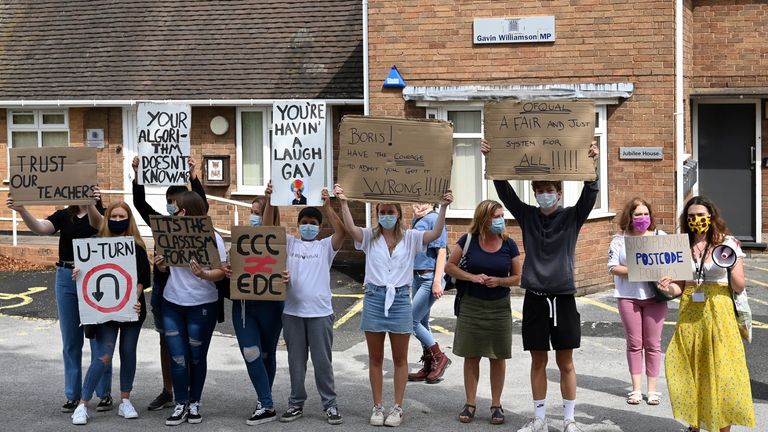 “It is clear that maintaining confidence in our qualifications whilst being fair to students requires this difficult decision,” she said.

“These have been exceptional circumstances.”

No student who received their marks last week will get a lower grade as a result of the announcement, Ms Williams added.

The move piles further pressure on the government to act in England.

Some senior Conservative MPs and the Tory architect of GCSEs in the 1980s want the publishing of results to be postponed while a better system is worked out.

While Labour wants students to receive the grades predicted by their teachers.

Politicians are scrambling to avoid another week’s chaos following complaints that the algorithm meant to standardise grades benefited private schools and “baked in inequality”.

Boris Johnson has previously called it “robust” and “dependable”.

The prime minister’s spokesman said he has full confidence in Gavin Williamson, the education secretary for England, and exams regulator Ofqual.

He told reporters: “It is a devolved issue, our focus remains on working hard to introduce the fairest system possible for pupils.”

Sky News understands the UK government will make an announcement on exam results later on Monday.

Tags: A-level, and, GCSE, in, RESULTS, Wa
You may also like
Recent News:
This website uses cookies to improve your user experience and to provide you with advertisements that are relevant to your interests. By continuing to browse the site you are agreeing to our use of cookies.Ok