President Trump’s sustained assault on his own party in Georgia, and his repeated claims of election fraud in the state, have intensified worries among Republicans that he could be hurting their ability to win two crucial Senate runoff races next month.

The president has continued to claim without evidence that his loss in the new battleground state was fraudulent, directing his ire in particular at Gov. Brian Kemp and Secretary of State Brad Raffensperger, both conservative Republicans, whom he has accused of not doing enough to help him overturn the result.

Over the weekend, he escalated his attacks on Mr. Kemp, saying he was “ashamed” to have endorsed him in 2018, and on Monday he called Mr. Kemp “hapless” as he urged him to “overrule his obstinate Republican Secretary of state.’'

Mr. Trump’s broadsides have quietly rattled some Republicans in the state, who fear that concerns about the fairness of the presidential election could depress turnout for the Senate races, which will determine whether Democrats or Republicans control the chamber.

After resisting entreaties to appear in Georgia, the president plans to travel there this weekend, though even some of his own aides remain uncertain whether his anger toward state officials will overshadow any support he may lend the party’s two candidates.

“You can’t say the system is rigged but elect these two senators,” said Eric Johnson, a campaign adviser to Kelly Loeffler, one of the G.O.P. Senate candidates, and a former Republican leader of the Georgia Senate. “At some point he either drops it or he says I want everybody to vote and get their friends to vote so that the margins are so large that they can’t steal it.”

The split signifies both an extraordinary dispute over election integrity within the Republican Party and a preview of the control the president may continue to exert over the conservative base even after he leaves office. As Mr. Trump talks seriously about the possibility of mounting another bid for the White House in 2024, his personal goals may not always align with those of his party — no matter the political stakes. 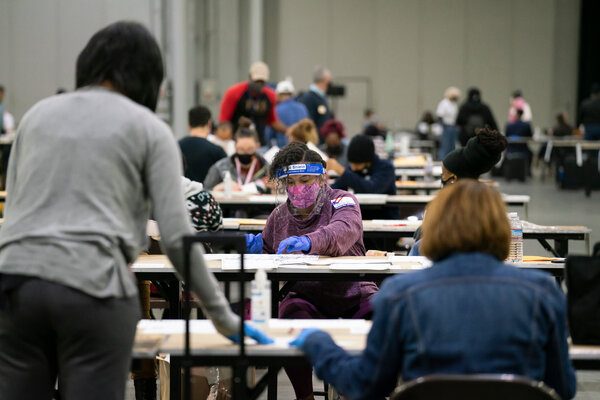 Mr. Trump, who earned about 12,700 fewer votes than Joseph R. Biden Jr. in Georgia, has requested a machine recount, which is underway. A hand recount of all five million ballots found a few thousand uncounted ballots that slightly reduced Mr. Biden’s lead.

Already, a handful of Trump allies, citing fears of fraud, are urging supporters to boycott the Senate elections or write in the president’s name — an option not provided on the Georgia ballot in runoffs.

L. Lin Wood, a conservative Georgia lawyer and a Trump ally, is advising conservatives not to vote in the runoff elections, tweeting on Sunday that he won’t vote in “another fraudulent election with rigged voting machines & fake mail ballots.” Mr. Wood sued unsuccessfully to stop the state’s election certification and is now appealing for an injunction to stop the Jan. 5 runoff contests.

While that remains a fringe position, some Republican strategists and officials worry that the argument for not voting could gain traction if the president continues his attacks.

In Marietta, Ga., this weekend, Republican voters questioned Ronna McDaniel, the national party chairwoman, about why they should invest “money and time” in a runoff election that some see as already rigged against them.

“It’s not decided. This is the key — it’s not decided,” she pleaded with the audience. “If you lose your faith and you don’t vote and people walk away, that will decide it. We have to work hard.”

Many top G.O.P. officials, including the Senate majority leader, Mitch McConnell, have not commented on Mr. Trump’s attacks on Georgia’s electoral system. But his vitriol has roiled Republican politics in the state, where Mr. Biden upended several decades of G.O.P. dominance with a surprising victory over the president.

Historically, runoff contests have favored Republicans because of a drop-off of Democratic voters after the general election. But given the demographic changes in the state and concentrated efforts by Democrats to register more of their voters — and persuade them to cast absentee ballots before Election Day — many Republicans are preparing for a far tighter contest.

Parties, activists and allied outside groups have poured money and manpower into the state, investing heavily in advertising and grass-roots efforts.

Aware of Mr. Trump’s popularity with conservative voters, both Ms. Loeffler and David Perdue, the other G.O.P. senator seeking a new term, have bolstered Mr. Trump’s assertion on Twitter that the 2020 election was a “total scam,” and called for Mr. Raffensperger to resign. Mr. Kemp, who was elected governor with the president’s backing and is already raising money for his re-election bid in 2022, is wary of angering Mr. Trump while still trying to support the state officials who conducted a free and fair election.

On Monday, Mr. Kemp’s office released a statement noting that Georgia law prohibits the governor from interfering in elections, disputing Mr. Trump’s claim that he could override decisions by the secretary of state with an executive order.

Mr. Kemp’s campaign for governor, meanwhile, sent an email to supporters emphasizing his support for continuing “investigations into ALL voting irregularities’’ — a reflection of how important it is to appeal to Mr. Trump’s loyal base.

Mr. Raffensperger, who as Georgia’s top election official has borne the brunt of Trump supporters’ attacks, pushed back on Monday against the baseless conspiracy theories being floated by the president and his allies, in particular that software used by the state was manipulated by foreign oligarchs.

Like Mr. Kemp, Mr. Raffensperger is in a precarious position; even as he refuses to take steps to override the will of Georgia voters, he is also seeking to convince Republicans that he will be aggressive in ferreting out claims of liberal fraud.

“There are those who are exploiting the emotions of many Trump supporters with fantastic claims,” he said at a news conference on Monday morning. “Half-truths, misinformation, and frankly, they’re misleading the president as well, apparently.”

He also announced that his office was beginning investigations into four get-out-the-vote groups, including the New Georgia Project, which was founded by Stacey Abrams, Mr. Kemp’s 2018 rival in the governor’s race and the de facto leader of the Georgia Democrats. Mr. Raffensperger said that the groups were “working to register people in other states to vote here in Georgia.”

Newt Gingrich, the former House speaker from Georgia and a Trump supporter, said that the dissatisfaction with Mr. Kemp and Mr. Raffensperger was so widespread among Republican activists that he anticipated primary challenges against both men two years from now.

“I’ve had very close friends write me and say, ‘I have a Republican governor and secretary of state, and they’re both useless, so why do I stay involved?’” Mr. Gingrich said. “But I think they’ll take pretty active measures to get people to turn out based on the long-term historical importance of these two seats.”

Some Republicans are striving to persuade Trump supporters to again engage with that very system the president is denigrating. Surrogates, including Vice President Mike Pence, have already campaigned in Georgia. Other Trump allies are forming a super PAC that will broadcast ads featuring Donald Trump Jr., a popular figure in right-wing circles, urging their supporters to vote in the runoff elections.

So far, the president himself has spent little time focused on the Senate races, and instead has been far more focused on his desire for a recount of his own loss. But advisers have stressed to him that a Republican Senate is important, and as Mr. Pence was also traveling to Georgia on Saturday, Mr. Trump agreed to go as well.

Republicans inside and outside of Mr. Trump’s camp are divided as to whether an appearance will be productive. Some think it will help, since the party’s base voters will respond to him. Top Republicans have encouraged him to make the trip. But some of the president’s advisers are concerned about exactly how off-script he might go, and whether he will spend most of his speech attacking Mr. Kemp and other Republicans.

“I would hope when the president is in Georgia Saturday, he talks about the importance of turning out the vote,” Senator Roy Blunt, Republican of Missouri, said Monday. “And I think what he says on that trip will probably matter more than what he has said up until now.”

The president’s attacks on Georgia’s voting system are part of his overall efforts to undermine the electoral system, as a way of rationalizing his defeat. He has directed his anger at other states, and governors, as he did Monday with Gov. Doug Ducey of Arizona.

But unlike in other states, where down-ballot races are largely decided, Mr. Trump’s rhetoric in Georgia could carry long-term political consequences for both parties. If Republicans hold only one of the two seats, they will keep the Senate majority, giving them an effective veto over Mr. Biden’s agenda.

“As legal options are exhausted, conservatives will move on to the next fight,” said Brad Todd, a Republican strategist. “More than likely watching Nancy Pelosi be sworn in and seeing the scaffolding on the west front of the Capitol preparing for an inauguration is going to cause a unity of purpose among conservatives.”

James Sublett, 67, voted for Mr. Trump this year and believes the president’s unfounded claims that Democrats “stole the election.”

“The Democrats have cheated, they have dead people vote, they manufactured votes,” said Mr. Sublett, a retired real estate broker.

Still, he said it was important to vote in the Georgia runoffs.

“If we don’t get those Republican seats, this country is turning into socialism and communism 101,” Mr. Sublett said.

Tags: 2020 election, Senate races, US
You may also like
Recent News:
This website uses cookies to improve your user experience and to provide you with advertisements that are relevant to your interests. By continuing to browse the site you are agreeing to our use of cookies.Ok