President Biden’s pledge to ship out doses that could have been used domestically was a step toward a global campaign, but activists say much more is needed. 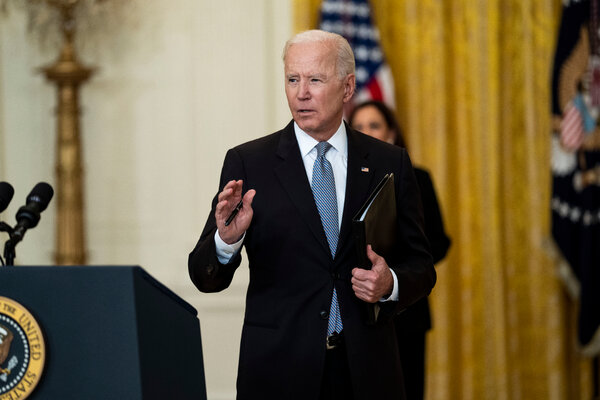 WASHINGTON — President Biden, heeding widespread calls to step up his response to the pandemic’s surge abroad, said on Monday that his administration would send 20 million doses of federally authorized coronavirus vaccine overseas in June — the first time he has pledged to give away doses that could be used in the United States.

The donation is another step toward what Mr. Biden promised would be an “entirely new effort” to increase vaccine supplies and vastly expand manufacturing capacity, most of it in the United States. He also put Jeffrey Zients, the White House coronavirus response coordinator, in charge of developing a global strategy.

“We know America will never be fully safe until the pandemic that’s raging globally is under control,” Mr. Biden said in a brief appearance at the White House. “No ocean’s wide enough, no wall’s high enough, to keep us safe.”

With new cases and deaths plummeting as vaccination rates rise in the United States, the epicenter of the crisis has moved to India and other nations. A growing and bipartisan chorus of diplomats, health experts and business leaders has been pushing the president to do more to end what the AIDS activist Asia Russell calls “vaccine apartheid.”

“He’s crossed the threshold into direct donations,” said J. Stephen Morrison, a global health expert at the Center for Strategic and International Studies, which teamed up with three other health institutes on Monday to release a plan to ramp up vaccine supply. “That’s an important shift.”

“Donating 80 million doses of vaccines without a plan to scale up production worldwide is like putting a Band-Aid on a machete wound,” said Gregg Gonsalves, a longtime AIDS activist.

Tags: Coronavirus;COVID-19, VACCINES
You may also like
Recent News: