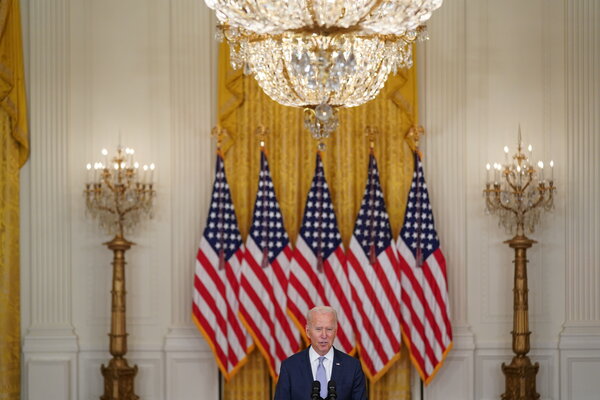 President Biden on Thursday implored Congress to include strict controls on prescription drug prices in the mammoth social policy bill that Democrats plan to draft this fall, hitting on an issue that his predecessor campaigned on but failed to deliver.

Mr. Biden said he wants at least three measures included in the $3.5 trillion social policy bill that Democrats hope to pass using budget rules that would protect it from a Republican filibuster. He wants Medicare to be granted the power to negotiate lower drug prices, pharmaceutical companies to face penalties if they raise prices faster than inflation, and a new cap on how much Medicare recipients have to spend on medications.

“There aren’t a lot of things that almost every American could agree on,” Mr. Biden said at the White House. “But I think it is safe to say that all of us, whatever our background or our age and where we live, could agree that prescription drug prices are outrageously expensive in America.”

The president was pushing on an open door. Congressional Democrats have already said they want to include all three measures in the so-called reconciliation bill that House and Senate committees hope to assemble.

“The Finance Committee will be a central part of the debate when it comes to lowering Americans’ health care costs and making high-quality health care available to more families,” the committee’s chairman, Senator Ron Wyden of Oregon, said as Senate Democrats unveiled the $3.5 trillion budget blueprint that would allow them to pass the legislation without a Republican vote.

Tags: Le, Pharmaceuticals, US Politics
You may also like
Recent News: