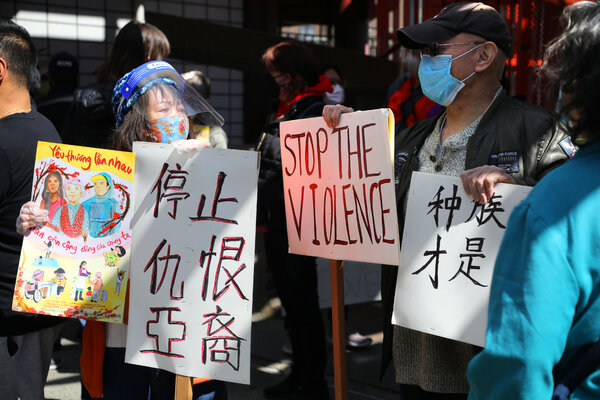 By Catie Edmondson and Jim Tankersley

President Biden is signed a bill on Thursday meant to address a proliferation of assaults and other crimes against Asian-Americans since the outbreak of the Covid-19 pandemic.

Mr. Biden and Vice President Kamala Harris thanked Democratic and Republican lawmakers for joining together to pass the legislation.

“This bill brings us one step closer to stopping hate, not just against Asian-Americans, but for all Americans,” Ms. Harris said.

She said lawmakers still had work to do to combat discrimination and hate. “Racism exists in America,” she said. “Xenophobia exists in America. Anti-Semitism, Islamophobia, homophobia, transphobia, it all exists.”

The law passed by a vote of 94 to 1 in the Senate and 364 to 62 in the House. “We simply haven’t seen this kind of bipartisanship for much too long in America,” Mr. Biden said.

“My message to all those of you who are hurting is, we see you,” Mr. Biden said. “And the Congress has said, we see you. And we are committed to stopping the hatred and the bias.”

The measure, led by Senator Mazie Hirono, Democrat of Hawaii, and Representative Grace Meng, Democrat of New York, will establish a position at the Justice Department to speed the agency’s review of hate crimes and expand the channels to report them, in an effort to improve data collection around attacks targeting Asian-Americans. It will also encourage the creation of state-run hate crimes hotlines, provide grants to law enforcement agencies that train their officers to identify hate crimes and introduce a series of public education campaigns around bias against people of Asian descent.

The bill amounts to the first legislative action Congress has taken to bolster law enforcement’s response to attacks on people of Asian descent during the coronavirus pandemic. Experts testified before a key House panel in March that attacks targeting Asian-Americans — many of them women or older people — have increased nearly 150 percent in the past year, with Americans of Asian descent reporting being spat on, shoved to the ground, beaten, and burned by chemicals.

Democratic Asian-Americans in Congress earlier in the year had confronted the Biden administration about what they said was an unacceptable lack of representation at the highest levels of his administration, culminating in the administration appointing a senior official to focus on Asian-American priorities. Ms. Hirono and Senator Tammy Duckworth of Illinois had pledged to withhold their votes on some nominees until Mr. Biden engaged more actively on the issue.

Tags: Justic, Legislation, US Politics
You may also like
Recent News: