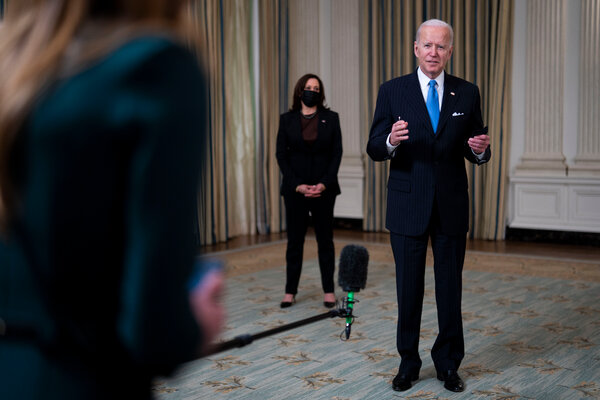 WASHINGTON — President Biden said on Tuesday that the United States was “on track” to have enough supply of coronavirus vaccines “for every adult in America by the end of May,” accelerating his effort to deliver the nation from the worst public health crisis in a century.

Merck is the world’s second-largest vaccine manufacturer, though its own attempt at a coronavirus vaccine was unsuccessful. Officials described the partnership between the two competitors as historic and said it harks back to Mr. Biden’s vision of a wartime effort to fight the coronavirus, similar to the manufacturing campaigns when Franklin D. Roosevelt was president.

“As a consequence of the stepped-up process that I’ve ordered and just outlined, this country will have enough vaccine supply — I’ll say it again — for every adult in America by the end of May,” Mr. Biden said. “By the end of May. That’s progress — important progress.”

He also said he wanted all teachers vaccinated by the end of this month.

The president’s timetable, if it comes to pass, provides a bright light at the end of a long, dark tunnel, though he acknowledged that the nation remained in a tenuous situation. The announcement on Tuesday came days after the Food and Drug Administration gave Johnson & Johnson emergency authorization for its vaccine, which unlike the two others that are available requires just one dose.

Public health officials fear a fourth surge of the coronavirus pandemic, fueled by worrisome new variants, as states like Texas and Mississippi rush to fully reopen. While daily caseloads have undergone a steep drop since January, the decline appears to be leveling off, and top federal health officials warned governors last week against relaxing coronavirus restrictions.

“We cannot let our guard down now or assure that victory is inevitable,” Mr. Biden said. “We can’t assume that.”

He had previously said that there would be enough coronavirus vaccines for every American by the end of July. While the president’s remarks on Tuesday set a new marker against which he will be measured, his administration and his predecessor’s had already laid the groundwork to cover the 260 million eligible adults by the end of May.

Two other vaccine manufacturers, Moderna and Pfizer BioNTech, pledged last month to deliver together enough to cover 200 million Americans by that date. Johnson & Johnson’s $1 billion contract, negotiated last year when Donald J. Trump was president, calls for the company to deliver enough doses for another 87 million Americans by the end of May, which would have given the country enough vaccine for all adults 18 and older.

Tags: Pharmace, Vaccines Immunization
You may also like
Recent News: