WASHINGTON — Back at the Capitol for his second inaugural in 1997, Bill Clinton delivered a blunt appeal to the hardened Republican majorities confronting him in Congress.

“The American people returned to office a president of one party and a Congress of another,” Mr. Clinton told the lawmakers and the crowd gathered at the Capitol. “Surely they did not do this to advance the politics of petty bickering and extreme partisanship they plainly deplore.”

Less than two years later, House Republicans impeached Mr. Clinton, suggesting his words were not exactly taken to heart. With varying degrees of success, presidents have used their inaugural addresses to appeal to the lawmakers they need to enact their agendas. President Biden was no exception on Wednesday, though he was less direct than Mr. Clinton.

“To restore the soul and secure the future of America requires so much more than words. It requires the most elusive of all things in a democracy: Unity,” Mr. Biden said in remarks with special meaning for the badly divided Congress.

Perhaps more than any recent president, Mr. Biden has staked his reputation and the fortunes of his administration on his ability to work with a polarized Congress where Democrats have only the slimmest margins of control. Despite the recent history of legislative inertia and toxic politics, Mr. Biden has made it clear that he believes he can leverage his 36 years of experience and relationships on Capitol Hill to work across the aisle and achieve the breakthroughs needed to get the nation through its multiple crises — this “rare and difficult hour,” as he put it.

He immediately set about trying to strengthen his bond with Republicans, inviting Senator Mitch McConnell of Kentucky, the Republican leader who waited a month to recognize him as president, and Representative Kevin McCarthy of California, the top House Republican who supported overturning his victory, to attend Mass with him Wednesday morning before the inauguration.

Mr. McConnell, in a lighter post-inaugural moment that served as a reminder of the clubby Washington circles in which the president has long been comfortable, claimed Mr. Biden and Vice President Kamala Harris as a “son and daughter” of the Senate because of their service there, while wryly pointing out that neither had ever been a member of the House, a chamber senators love to deride as the lowlier body. Ms. Harris received a bipartisan standing ovation in the Senate when she entered to preside for the first time after her swearing-in as vice president.

In his speech, Mr. Biden also reminded House and Senate members attending that he was one of them.

“Look, folks,” he said, employing one of his favorite expressions, “all my colleagues I served with in the House and the Senate up here — we all understand the world is watching, watching all of us today.”

But it is going to take more than Mr. Biden’s trademark backslapping and good nature to break through the persistent gridlock in Congress. Already, Republicans are mounting challenges to his cabinet nominees, and Mr. Biden nearly became the first president since at least Jimmy Carter to not win confirmation of a cabinet nominee during his first hours in office. At the last minute, Senator Tom Cotton, Republican of Arkansas, dropped his objection to the confirmation of Avril D. Haines to be the director of national intelligence. Still, nominees for other national security posts that are typically approved immediately after a president takes office remained stalled.

As for Mr. McConnell, he was insisting on a Democratic promise to retain the legislative filibuster before agreeing on a plan to organize the new 50-50 Senate, throwing those talks and the Senate itself into uncertainty.

Congressional Republicans believe they held their own in the last election and are not going to make it easy for the new administration. Mr. McConnell thwarted President Barack Obama at every turn when Republicans were last in the minority, and Mr. Obama at times was backed by a Senate with 60 Democratic votes.

Republicans will come under pressure to cooperate from voters, Washington interests that would like to see Congress make some progress on big issues and even their former colleagues. In an open letter to congressional leaders, 128 former Republican and Democratic members of Congress pleaded with the leaders to put aside their deep differences and try to take advantage of the opening provided by a new administration.

“We urge you, as division not seen since the Vietnam War defines our union, to abandon the politics of tribalism,” the letter said. “We challenge you, as our representative democracy is under severe stress, to shun those who peddle hyper-partisanship for personal gain.” 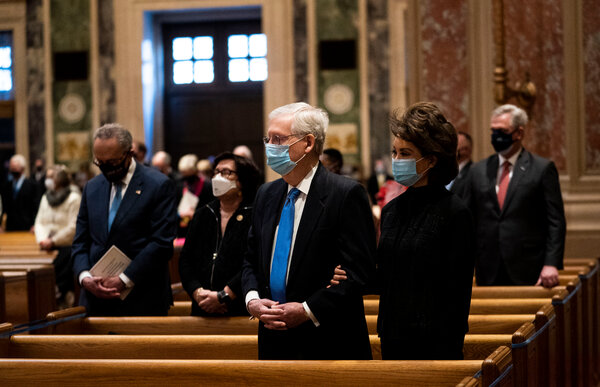 Despite a view among some Senate Democrats that Mr. Biden is underestimating the level of partisanship in Congress, he has made it clear that he intends to try to build support in both parties for his plans. He has said he believes that the level of toxicity will decrease with Donald J. Trump gone from the White House, and that deals can be struck on issues ranging from pandemic relief to immigration to health care to public works.

But as Republican opposition surfaced to advancing his nominees and Mr. McConnell dug in behind the filibuster, some Democrats privately wondered whether Mr. Biden was now getting the idea that Republicans did not mean to help him govern.

His allies say Mr. Biden is determined to find a way to build consensus and will strive to do so. They also say he is willing to change course if he must.

“He is gracious and willing to compromise,” said Christopher J. Dodd, who, as a Democratic senator from Connecticut, served for decades with Mr. Biden. “But don’t make the mistake of thinking that is all he is going to do. I have also seen him be tough.”

Some Republicans have shown they are ready to cooperate with Democrats.

“I may not always align with the viewpoints of this administration, but no matter how different our opinions or challenging the subject, I have and always will do my best to build consensus,” said Senator Lisa Murkowski, the Alaska Republican who joined a bipartisan group that helped push through a stalled pandemic relief package.

Not all Republicans were so agreeable. Senator Josh Hawley of Missouri, a leader of the move to reject the Electoral College vote, held up a vote on Mr. Biden’s nominee for the Department of Homeland Security — a post that has typically been filled on the first day.

Mr. McConnell’s push for preservation of the filibuster was looming as a serious impediment to getting the Senate down to business. Some Democrats want to be able to eliminate the 60-vote threshold if Republicans join in lock step against the new administration’s initiatives.

In his first remarks as majority leader, Senator Chuck Schumer, Democrat of New York, told Republicans now in the minority that Democrats would try to work with them “when and where we can.” But he also promised: “This Senate will legislate. It will be active, responsive, energetic and bold.”

Even with the obvious tensions, lawmakers seemed willing to reserve their big fights for another time and let most of the attention be devoted to the new president and the inauguration.

But as Mr. Biden said, the coming weeks are going to be a “time of testing.” And one of the biggest tests is whether the new president can fulfill his promise to forge bipartisan consensus in Congress.

Tags: BIDEN, Inauguration, US Politics
You may also like
Recent News: