The president has raised expectations regarding vaccine supply and his complex, sprawling $1.9 trillion stimulus bill. 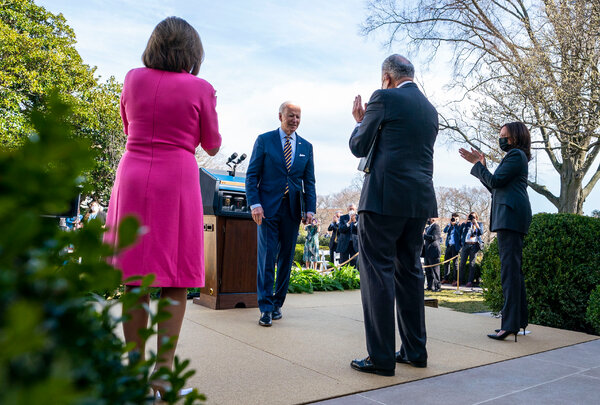 WASHINGTON — Having used a national television address Thursday night to offer Americans a bit of hope — including the tantalizing prospect of a Fourth of July with friends and family — President Biden now faces daunting challenges that will determine whether he succeeds in making good on that promise.

He must use the power of the government he leads to administer the coronavirus vaccine to most of the country in less than four months. To do that, he will test the operational limits of a health care system that has not faced a pandemic of this magnitude in more than a century.

At the same time, Mr. Biden needs to ensure that his $1.9 trillion American Rescue Plan quickly and efficiently delivers on the promise of its name — to bolster the economy, provide emergency cash for the unemployed, enable students to return to classrooms and provide expanded aid to the neediest.

If he can do both, the president will have a chance to win additional support from a weary public that is eager to cast off the heavy burdens that the pandemic has imposed on their lives. In his speech from the East Room of the White House, the president was explicit about his belief that his administration would meet those challenges.

“It’s never, ever a good bet to bet against the American people,” he said as he concluded. “America is coming back.”

But raising expectations creates risks for a new president who faces potential roadblocks ahead, any of which could undermine the public’s confidence in his ability to govern and create openings for Republicans.

The president acknowledged as much on Friday, as he celebrated the passage of the stimulus legislation with Democratic lawmakers in a ceremony at the White House. To all those in the Rose Garden with broad grins on their faces, he offered a note of caution learned through decades of experience.

Tags: American Rescue Plan, US Politi
You may also like
Recent News: