RICHMOND, Va. — Alonzo Jones, a Black mayor in Southern Virginia, was used to the playbook of a white politician facing allegations of racism.

So when Gov. Ralph Northam visited his town after a racist photograph was discovered on the governor’s medical school yearbook page, Mr. Jones expected more of the same: a requisite visit to a Black church, a news conference with Black allies, and promises of growth moving forward.

Even so, Mr. Jones agreed to a private meeting. “What can we do for you?” he recalled asking Mr. Northam.

“What can I do for you?” the governor shot back.

And soon, to Mr. Jones’s surprise, Mr. Northam began making the kinds of statewide changes that the mayor suggested he should do.

On a national level, Mr. Northam may forever be enshrined as the Democrat who defied calls to resign in the face of unquestionable racism — a photograph on his yearbook page that showed one man in blackface and another in a Ku Klux Klan costume. But among Black political leaders and elected officials in Virginia, he is set to leave office with another legacy: becoming the most racially progressive governor in the state’s history, whose focus on uplifting Black communities since the 2019 scandal will have a tangible and lasting effect.

Mr. Northam’s arc, from political pariah denounced by nearly every national Democrat to a popular incumbent with support from Black elected officials and even progressive activists, is a complex story of personal growth and political pressure, a testament to how crisis can also provide opportunity. However, it would not have been possible without the Black Virginians who rallied around him even as they stared down immense pressure to help force him from office — Black staff members who stayed in the administration, a Legislative Black Caucus that chose to focus on policy goals rather than resignation, and a Black activist community that quickly followed the lawmakers’ strategic lead.

The result is a reshaped Virginia. Since 2019, and aided by a Democratic sweep of both state legislative houses, the commonwealth has become the first state in the South to abolish the death penalty, allocated more than $300 million to the state’s financially struggling Black colleges, passed sweeping police reform measures, and created the country’s first state cabinet-level position for diversity, equity and inclusion.

Mr. Jones, the mayor of Danville, Va., said that the developments were a powerful antidote to a society struggling with concepts like “cancel culture” and “wokeness.” Instead of derision, Mr. Northam and the Black leaders who supported him showed the power of redemption, humility and growth.

“Black people have always had to believe in forgiveness, and understanding,” Mr. Jones said. “And I know a lot of times people want to argue that it hasn’t gotten us anywhere, but I tend to disagree.” 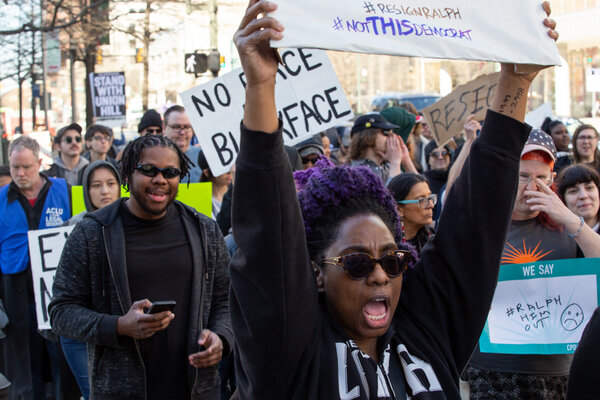 Mr. Northam, who agreed to an extensive interview for this article, bluntly admitted that the 2019 scandal changed the political priorities of his administration. He also said that it sent him on an ongoing personal journey of re-educating himself about race, racism and whiteness.

“I made it very clear from when this happened, that racial equity was going to be a top priority for the remainder of our administration,” Mr. Northam said, citing the elimination of the death penalty as an example.

“If what happened in February 2019 had not happened, I’m not sure if my eyes would have been open to the point where I went back and looked at the history, and how many people of color had been executed, and why capital punishment was being used,” he added.

In the interview, the governor reiterated that he does not believe he was either man in the photograph. Mr. Northam has, however, admitted to wearing blackface in another instance — while dressing up as Michael Jackson for a costume party.

“What this experience has done for me is that it has really opened my eyes,” Mr. Northam said.

Bernice Travers, a longtime community activist in Richmond who is Black, said that Mr. Northam’s admission that the scandal had changed his priorities was quite painful. She said it sent an implicit signal to the Black people who helped elect him.

“It tells you that our votes, Black votes, are not that important to elected officials — even Democrats,” Ms. Travers said. “It took a scandal of this magnitude to get done things we’ve wanted for a long, long time.”

The news about the photograph broke on a Friday, as Mr. Northam was traveling to a funeral for a Gold Star family.

“My first response was, someone has Photoshopped this,” he said. “I guess it took a little while for the gravity of the situation to sink in.”

Marcia S. Price, a Black member of the Virginia House of Delegates who had served as a co-chair of Mr. Northam’s campaign for governor, said that when saw the report, she asked her staff to leave her office and broke down in tears.

“The initial reaction was that it hurt,” she said. “It hurt like hell.”

The national condemnations were swift and unequivocal. Democratic presidential candidates, jockeying for the votes of Black Southerners, called for Mr. Northam to resign. Joseph R. Biden Jr. said the governor had “lost all moral authority and should resign immediately.” Local Black lawmakers and activists called for his ouster at a protest at the State Capitol.

By that Saturday, however, Mr. Northam had made clear in public statements and private meetings that he had no intention of leaving office. In the recent interview, the governor said he did not feel it was hypocritical to say he understood the pain he caused many Black Virginians, even as he rejected their calls for him to resign.

“I know myself. I know how I was raised. I know that I got into this job because I want to help people,” Mr. Northam said. “The folks that have been close to me — my friends, my pastor, I can go down that list — they all said, ‘This is not the time for you to step aside.’”

Mr. Northam soon received a stroke of unforeseen fortune, which complicated the moral calculus for the state’s Black elected officials. His lieutenant governor and would-be successor, Justin Fairfax, was accused of sexual assault by two women, though he has repeatedly denied the allegations. Then the state’s third-ranking official, Attorney General Mark Herring, voluntarily admitted that he had worn blackface at a party in 1980.

The revelations made Virginia Democrats a national punchline at a time when the party had made extraordinary electoral gains fueled by a backlash to President Donald J. Trump. But the disclosures also quietly prompted a new round of strategic discussions among the state’s Black political leadership, and an opening for Mr. Northam’s administration.

Using Black staff members as a go-between, elected officials and activists said they began to hear from Mr. Northam’s administration the same line he had given Mr. Jones in Danville: “What can we do for you?” And a community that had been embarrassed and ashamed began to see the moment as a window of opportunity.

Ms. Travers was among the first to show public support for Mr. Northam, joining well-known Black activists and clergy members in a news conference urging Virginia to give him another chance. Ms. Travers said they were met with condemnation from other activists — particularly younger ones.

She said what happened would serve as a lesson for a younger generation of Black activists: There are times when the carrot is more powerful than the stick.

“We didn’t see ourselves as being used,” Ms. Travers said. “We saw ourselves as looking at an opportunity to get this man to create some laws and programs that can move Black people forward.”

Joe W. Dillard Jr., a 32-year-old former N.A.A.C.P. leader in Norfolk, agreed with the characterization of a generational split: “The younger generation wanted the instant gratification of him leaving. But they knew he wasn’t leaving, so either demand some things to get or we stand on the sidelines and cry over spilled milk.”

Ms. Price, who represents heavily Black areas including Hampton and Newport News, said that when she returned to her district, it was clear to her that Black constituents were more divided on the scandal than the national outcry might suggest. Some wanted Mr. Northam to go, she said, but many were also so familiar with racism in the old Confederate South that they did not find his possible actions disqualifying.

“With folks that have privilege, it is usually when that privilege is put into jeopardy, or called out, that the learning begins,” she said.

“There were people calling me that have only spent a weekend at Virginia Beach, telling me what I should do for my constituents,” Ms. Price said. “But my lived experience shows me that I have to be strategic.”

If the Ralph Northam of today sounds like someone who has just completed a reading list of popular anti-racist literature, it’s because he has. He invokes the book “White Fragility” by Robin DiAngelo and “Unpacking the Invisible Knapsack,” the 1989 essay about white privilege. He says he was profoundly changed by the documentary “13th,” which focuses on racial bias in the criminal justice system.

“I don’t want to make excuses, but when I was in college, I wanted to go to medical school,” said Mr. Northam, who was a medical doctor before entering politics. “And I have been immersed since that time in biology and chemistry.” He went on: “Perhaps I should have spent more time looking into our history, but again, I didn’t. But I’m very interested in history now.”

The newfound interest in history extends to Virginia’s intense debate over Confederate statues, which is now forever linked to the deadly violence in Charlottesville in 2017. Since 2019, Mr. Northam has removed several Confederate references and statues from state parks, replaced a state holiday honoring Confederate generals with one intended to increase voting access, and added more than 25 historical markers for Black history in Virginia.

The answer to how, exactly, Mr. Northam survived a scandal is complicated — but there is no question he survived. Mr. Biden did an event with him last month. At a recent campaign event for former Gov. Terry McAuliffe, who is seeking to succeed Mr. Northam, a speaker hailed Mr. Northam as a Black community favorite.

“He’s like a celebrity,” said John Eley III, a member of the Newport News school board who is Black and dismissed the 2019 scandal. “They love him. He’s definitely our governor.”

The turn of events breathes new life into Mr. Northam’s political future, although he says that was not his primary concern. A state law prevents Virginia governors from serving consecutive terms, but there is some speculation that Mr. Northam, 61, could seek the office again in the future, as Mr. McAuliffe is doing.

Wes Bellamy, a former vice mayor of Charlottesville and a Black activist who rallied behind Mr. Northam, said the governor’s message of personal growth was commendable, but should still be viewed through the lens of politics. That’s why he focuses on the impact of Mr. Northam’s policy, he said.

“There are very few opportunities for Black people to demand what they want and truly believe the government is going to come through for them,” Mr. Bellamy said. “We knew we couldn’t just talk.”

Mr. Northam, for his part, says that he’s a changed man, and that he understands that arenas like health care, education, business and voting rights “are all just full of racism and oppression.”

Mr. Bellamy said Black political leaders saw another lesson. “A white person used their privilege to stay in office,” he said. But to make change, “Black people used their power.”

Tags: Black People;African American;
You may also like
Recent News: