It comes after furious Paris officials and fishermen warned they would cut an underwater power supply to the Channel island. Trawlermen are frustrated at post-Brexit laws that mean French boats fishing off the isle, a UK crown dependency, need a licence from Jersey. Government insiders believe this is the latest in a string of threats by the EU and its member states still reeling over the impacts of Brexit.

A senior source said: “Comments such as these are surprising and disappointing, especially from a close neighbour.

“This is just the latest example of the EU issuing threats as a first resort at any sign of difficulty. They should be using the mechanisms of our new Treaty to solve problems; that is exactly what it is there for.”

French minister for the seas Annick Girardin claimed that Jersey was in breach of the post-Brexit fisheries agreement allowing her country’s trawlermen access to British waters.

She claimed just 41 French vessels had been issued licences to fish off the coast of Jersey, but with strict limits on the zones they are allowed to operate and for how many days for. 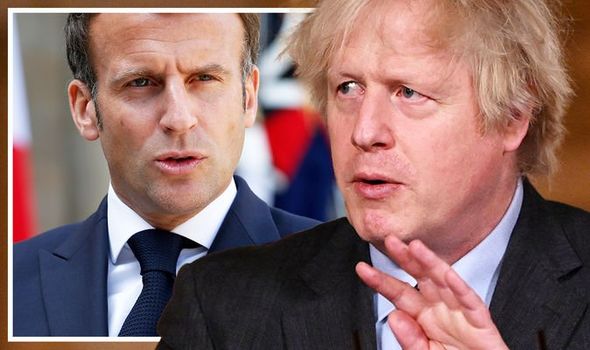 Ms Girardin said she was “revolted” by the curbs on fishing activity, which she insisted was in contradiction of the Brexit deal signed by Boris Johnson on Christmas Eve last year.

Raising the threat of an energy blockade, she added: “We are ready to use these retaliation measures.”

Downing Street officials see this as just another unacceptable threat levelled by the European side in the wake of our split from the bloc.

Since the end of the transition period on December 31, the European Commission has threatened to impose a hard border on Ireland to stop vaccines slipping into the UK.

Top eurocrat Ursula von der Leyen has also claimed Brussels would use “whatever tool we need” to ban the export of life-saving coronavirus jabs to Britain.

And frustrated French officials have also issued repeated threats because their fishermen have lost out on access to our coastal waters.

Most recently, Clement Beaune, the country’s hardline Europe minister, said he would target British financial services firms in the row over fishing fights.

A Government spokeswoman said: ““To threaten Jersey like this is clearly unacceptable and disproportionate.

“We are working closely with the EU and Jersey on fisheries access provisions following the end of the Transition Period so trust the French will use the mechanisms of our new treaty to solve problems.”