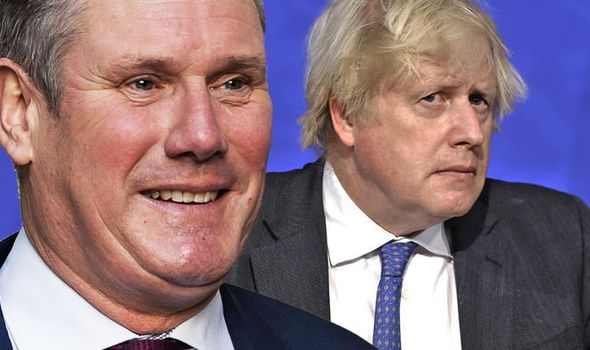 The Prime Minister admitted voters were “frustrated” after weeks of allegations about sleaze and lockdown rule breaking in Downing Street. Mr Johnson is facing a wake-up call after polling showed the country has doubts about his leadership. Research for the Daily Express carried out on Thursday put the Conservatives four points behind Labour on 34 nationally.

Just over half the public, 53 percent, said they lacked confidence in Mr Johnson as Prime Minister, although the figure dropped to 31 percent among those who voted for the  Conservatives in 2019.

The Savanta ComRes study found 52 percent of adults believe Mr Johnson is handling the pandemic badly but among Tory voters, 55 percent back his response. Younger voters were most unhappy with his approach but 41 percent of the over 55s were supportive.

Allegations of lockdown rule breaking in Downing Street have dented trust in Mr Johnson among 64 percent of voters. Rishi Sunak is by far the most popular candidate to succeed the PM if he left office, with a quarter of voters favouring the Chancellor, rising to 37 percent among Conservative voters.

Mr Johnson’s former leadership rival Jeremy Hunt was second on eight percent, followed by Sajid Javid on seven percent and Foreign Secretary Liz Truss on six percent. The poll showed deep concern in the country about the rising cost of living with 82 percent of adults revealing they are worried and just 17 percent unconcerned.

Some 38 percent of adults are not confident the UK will recover from the Covid-19 pandemic in 2022 compared to 32 percent who are confident it will.

Chris Hopkins, associate director at Savanta ComRes, said: “Another one? That’s thirteen consecutive Labour leads among pollsters now, and the only person it’s unlucky for is Boris Johnson, with the latest coming in the wake of a humiliating by-election defeat in North Shropshire.

“Continuing poll leads for Labour, coupled with this by-election defeat scrubs away the sense of electoral superiority that Boris Johnson supposedly has, with many now starting to worry that the Prime Minister is losing some of his electoral magic dust.

“This ultimately is good news for Labour; to potentially get Keir Starmer to No 10, they need the Conservatives to lose more seats than Labour necessarily win, and if the Lib Dems can help them with that, then maybe governing as a minority leader is Starmer’s clearest path to power.”

The results of the poll of  2,139 UK adults carried out on Thursday come as the Prime Minister was reeling from a shock defeat in North Shropshire. The by-election was triggered after Owen Paterson quit following a botched No 10 attempt to shield him from a 30-day suspension for breaching lobbying rules.

Campaigning was also overshadowed by the string of allegations about parties in Downing Street during lockdown last year. Senior Tories warned Mr Johnson he was “drinking in the last chance saloon” and must put a stop to the “constant drama”.

The North Shropshire poll was one of the worst by-election defeats in modern history with the Conservative majority of 23,000 wiped out as the Liberal Democrats secured victory. New MP Helen Morgan won by nearly 6,000 votes, a 34 per cent swing.

Mr Johnson said he had failed to get the message across to the public about crunch issues, such as the success of the UK’s vaccine programme and economic response to the pandemic.

He said there has been a “constant litany” of stories about sleaze and rule breaking instead of the issues that matter to the public. On a visit to Hillingdon Hospital in London, Mr Johnson said: “Clearly the vote in North Shropshire is a very disappointing result.

“I totally understand people’s frustrations. I hear what the voters are saying in North Shropshire. In all humility I have got to accept that verdict. I understand that what voters want us as the Government to be doing at all times is to focus on them and their priorities.”

The PM said blame for the disastrous result fell at this door. “I’m responsible for everything that the Government does and of course I take personal responsibility,” he said.

“I think that people are frustrated and I understand that. Basically what’s been going wrong is that in the last few weeks some things have been going very well, but what the people have been hearing is just a constant litany of stuff about politics and politicians and stuff that isn’t about them and isn’t about the things that we can do to make life better.”

Mr Johnson denied he was blaming the media for covering allegations of wrong-doing. He said: “I think my job is to get over what we’re doing more effectively and to show people that, as a result of the fastest vaccine rollout and the fastest booster rollout in Europe, that we’ve got more jobs than before the pandemic began.

“I’ve got to put my hands up and say ‘have I failed to get that message across in the last few weeks? Has it been obscured by all this other stuff?’ Yes, I’m afraid it has.”

Mr Johnson admitted he needs to fix” issues like the reported Number 10 parties and the funding of the refurbishment of the No 10 flat.

“Those questions are exactly the kind of questions about politics and politicians and all those kind of things, the running of government, that I’m going to have to fix of course,” he said.

“But the real issue people want to focus on is what we’re doing to sort out the NHS, the investment we are putting in to get us through a very tough time and what we are doing to tackle the pandemic.”