Dominic Cummings, who has been engaged in a weeks-long feud with Downing Street, published a lengthy blogpost that he claimed showed details of how “Number10/Hancock have repeatedly lied about the failures last year”.

Amid his more than 7,000 words, Mr Cummings also included a series of screenshots from what he said were his WhatsApp exchanges while working in Downing Street during the first wave of the coronavirus pandemic last year. 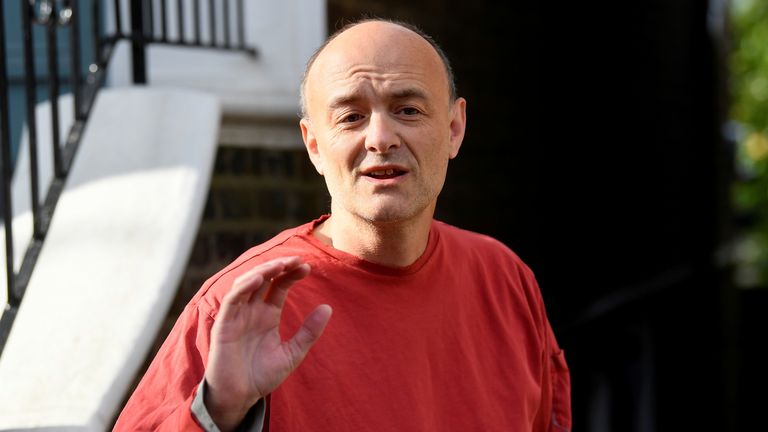 In one exchange, which Mr Cummings said was part of late-night messages on 26 March 2020, he and Mr Johnson are shown to be discussing actions from “MH” in boosting the UK’s COVID testing capacity.

Mr Cummings added, shortly after receiving that message from the prime minister, he had a series of missed calls from Mr Johnson who was calling to say he’d tested positive for coronavirus.

In another exchange, said to be from 27 April last year, Mr Johnson is said to have openly wondered about taking responsibility for procuring Personal Protective Equipment (PPE) away from Mr Hancock and giving it to Cabinet Office minister Michael Gove.

The prime minister is claimed to have written: “On ppe it’s a disaster. I can’t think of anything except taking Hancock off and putting Gove on.”

Mr Cummings, who left his role as Mr Johnson’s chief adviser last November amid a Number 10 power struggle, last month gave seven hours of evidence to MPs on the government’s response to the COVID crisis.

He used that appearance to claim Mr Hancock should have been sacked for “15 to 20 things” including “lying” to people “on multiple occasions”.

Mr Cummings has also recently made other explosive claims about Mr Johnson, including about the funding of the prime minister’s refurbishment of his Downing Street flat.

The feud between Mr Cummings, Mr Johnson and Mr Hancock has now deepened further with the publication of the ex-adviser’s latest blogpost – which he published shortly before the prime minister appeared before MPs in the House of Commons on Wednesday.

In the blogpost, Mr Cummings also described what he said were contrasting styles in the handling of key COVID meetings between Mr Johnson and Foreign Secretary Dominic Raab, who deputised for the prime minister after Mr Johnson fell seriously ill with COVID.

The prime minister’s former adviser wrote that meetings under Mr Raab were “less pleasant for everybody but much more productive”.

“He let good officials actually question people so we started to get to the truth.

Mr Cummmings also claimed Mr Johnson has a “clear plan” to leave Downing Street “at the latest a couple of years after the next election”, which is scheduled for 2024.

“He wants to make money and have fun not ‘go on and on’,” Mr Cummings wrote.

At the end of his blogpost, Mr Cummings listed a “few simple questions” to ask Mr Johnson.

This included asking why the prime minister kept Mr Hancock in post “given his failures on testing, care homes and PPE” and “how many more people died as a result of your failure to remove him?”.

Mr Cummings also wrote: “Why is No10 lying, including to Parliament, about the fact that the original plan was ‘herd immunity by September’ and had to be abandoned?”

And he also suggested Mr Johnson be asked whether he now agrees “with Hancock that there was no shortage of PPE or do you agree with yourself in April 2020 that PPE supply was ‘a disaster’ that required moving Hancock?”.

She said a promised public inquiry into the government’s handling of the COVID crisis “can’t wait” until next year, adding: “We can’t allow history to be rewritten. In order to get to the truth that public inquiry must begin now.

“Any minister who has been found to have broken the ministerial code and lied should and must resign.”

Mr Johnson declined the opportunity to comment on Mr Cummings’s claims when asked about them during Prime Minister’s Questions on Wednesday afternoon.