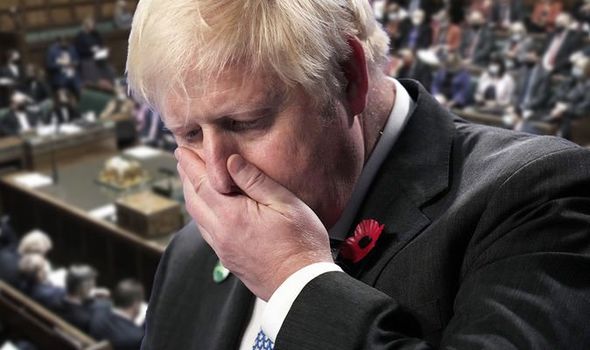 A three-hour emergency debate will take place in the Commons today for MPs to debate accusations of Government corruption.

Labour leader Sir Keir Starmer is demanding the Prime Minister “answer, apologise and act” over the claims that have engulfed Downing Street over the past week.

The Liberal Democrats, who secured the debate, have called for a statutory public inquiry into Mr Johnson’s administration.

Last week the Tories attempted to block an immediate 30-day Commons suspension of the MP Owen Paterson despite him being found to have broken parliament rules.

The Prime Minister has since also faced renewed pressure over whether holidays in villas provided by friends were properly declared, and how the refurbishment of his Downing Street flat was funded.

Even Conservative MPs have been left furious with the actions of No10 fearing it will damage the public’s trust in the Tory Party.

Over the weekend, Mr Johnson’s personal approval rating slumped to its lowest ever level.

An Opinium poll put the Prime Minister’s net approval rating at -20 percent, down from -16 a week ago.

The survey of 1,840 UK adults also indicated a drop of support for the party as a whole with the Tories leading Labour by just one percent.

Of those asked between November 5 and 6, 37 percent said they would vote Conservative at the next election compared to 36 percent for Labour.

The findings have added to fears among Conservative MPs that accusations of corruption are cutting through with the public.

Despite the growing anger as Mr Johnson both within his own party and across the political spectrum, the Prime Minister is thought to be planning to miss today’s emergency debate.

He is set to steer clear of the Commons to avoid facing MPs line up to attack him.

Ahead of today’s debate, Sir Keir Starmer said: “Boris Johnson needs to attend this debate, answer for his mistakes apologise to the country and take action to undo the damage he has done.

“The country is yet to hear a word of contrition over his attempts to create one rule for him and his friends and another for everyone else.

“He must now come to the House and say sorry.”