Downing Street has agreed to extend a provisional agreement on shared UK-EU fish stocks until the end of the year. Ministers say this will give our fishing fleets certainly if an agreement with Brussels isn’t found in the next two weeks. Environment Secretary George Eustice said: “We are committed to cooperating with the EU to reach an agreement. However, any agreement reached must be in the best interests of UK fishermen and we will not accept a poor deal.

“We have set provisional catch limits to allow these negotiations to conclude, and we will take steps to ensure that our fishermen have the certainty that they need – whatever the outcome.”

UK and EU officials have been locked in talks this week on setting the conditions for Total Allowable Catches, and the management of seabass and non-quota species in our waters.

No10 is insisting that the agreement must respect Britain’s status as a sovereign coastal nation, a key demand during the Brexit trade talks.

The EU last week announced it was extending its provisional catch limits, which expired yesterday, for four months. 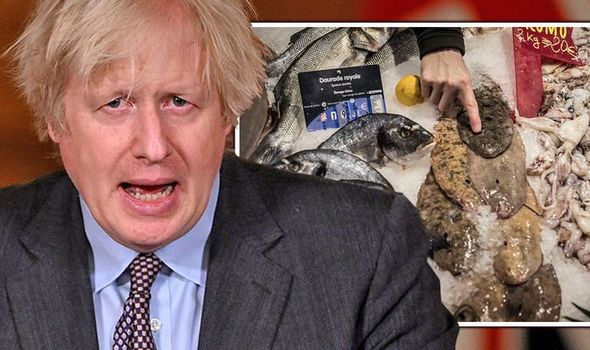 During the trade talks, both sides agreed a deal on fishing that would mean a five-and-a-half-year transition period.

The British catch will start at around half the fish in our waters, rising to two-thirds by the end of the period.

It means Brussels essentially handed back 25 percent of the fish its fleets caught previously in our coastal waters.

Under the agreement, the UK and EU will hold annual negotiations over access to fishing grounds.

EU insiders have claimed that UK demands during recent talks are in breach of the sprit of the post-Brexit trade and security treaty.

It was claimed No10 was attempting to close of fishing grounds previously opened to EU vessels.

The row emerged when the UK announced it was considering a total ban on fishing in British waters that form part of the Dogger Bank area of the North Sea.

The move was welcomed by environmentalists who have long called for stricter conservation measures.

But EU nations accused No10 of attempting to block their access under the guise of sustainability.

Provisional fishing rights were due to lapse today.

Usually agreements would have to be in place by January 1, but the EU and UK agreed to a grace period because the future relationship pact was signed so late last year.

Any disagreements would trigger a temporary measure that opens up each other’s waters for three months, while further talks are held.