Brexit: Details of deal set to be announced on Christmas Eve

Officials are believed to be ironing out the final details of a post-Brexit trade deal between the UK and the European Union. EU officials have recently stated trade talks have slowed on the issue of fishing, and a deal could still be hours away. But if a deal is agreed, it will then need to be approved by several elected officials within the UK and the EU.

After weeks of speculation that the UK could leave the transition period behind without a deal, the two sides have managed to make substantial progress in recent days.

European Commission President Ursula von der Leyen and Boris Johnson are reported to have spoken four times yesterday to help get a deal “over the line”, according to BBC political editor Laura Kuenssberg.

Mr Johnson and Ms von der Leyen will speak on the phone to sign off on a deal when it is reached, and an announcement from Downing Street is expected later today.

If there is no deal agreed, border checks and taxes will be introduced on goods between the UK and the EU.

The EU’s chief negotiation Michel Barnier has stated Christmas Eve is the final deadline for getting a trade deal agreed.

If a deal isn’t agreed by today, Mr Barnier has told both sides to prepare for a period of no deal next year. 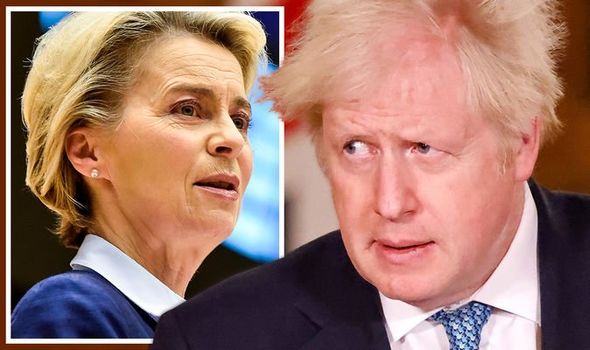 We will use your email address only for sending you newsletters. Please see our Privacy Notice for details of your data protection rights. Brexit: Boris Johnson ‘is toast’ as deal with EU slammed

If a deal is secured now, it leaves very little time until December 31 – when the post-Brexit transition period ends.

If a deal is agreed, the EU member state leaders must approve it via the European Council.

The agreement of a deal between the two sides may also mean the EU has to agree to a “provisional application” of the deal on January 1.

Members of the European Parliament (MEPs) will then be able to vote on the deal later in the month retrospectively.

In the UK, MPs will need to approve the agreement as well.

In order to become legislation, the agreement will have to be approved by both the House of Commons and the House of Lords.

As MPs are currently on recess for Christmas, the earliest date they may be recalled is around December 29.

The Telegraph reports MPs have been told to prepare to vote for a potential trade deal on Wednesday, December 30.

Mr Johnson is likely to face some opposition to his Brexit deal among his own MPs.

Reports suggest at least 20 members of the European Research Group (ERG) could vote down the proposed deal in a Commons vote next week.

But there is also a good chance at least 100 members of the group could back Boris when the vote is held.

An MP ally of Mr Johnson told the Daily Mail: “They know the stakes are very high for Boris as well as the country.

“No other leader could have done more to stand up to the EU.

“Boris has done a brilliant job – and is still held in high esteem by party members.

“They remember what a mess we were in before he replaced Theresa (May) and don’t want to go back to that.”

The UK’s transition period with the EU will have to come to end on December 31, 2020, as was agreed following the formal exit of the UK from the EU in January 2020.

This is a breaking story, refresh for updates.