Plans are under way for the new post-Brexit trade deal to be implemented, as EU ambassadors praised the bloc’s “resilience” during negotiations.

He arrived at the event in Brussels in a mask, carrying a hefty blue folder and greeted diplomats with elbow bumps – including one who kept up the festive spirit by wearing a red and white Christmas hat with stars on. 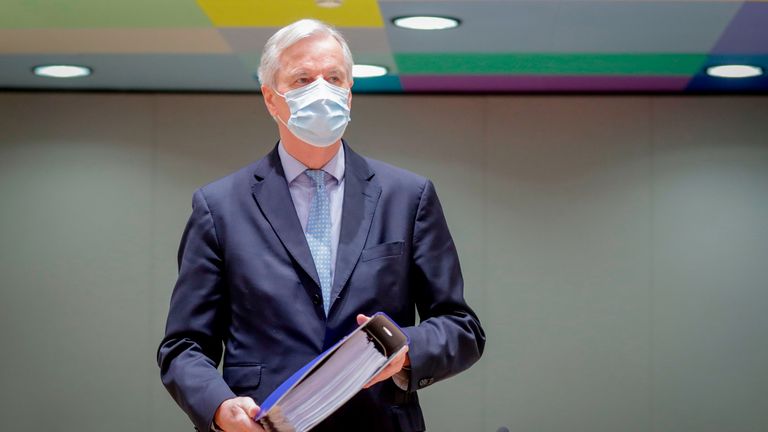 Sebastian Fischer, a spokesman for the group known as COREPER, said member states would decide on whether to proceed with the first step of ratification known as “provisional application” in the “coming” days.

That will mean the deal can come into force in time from 1 January 2021 without the need for a vote by the European Parliament, which has already broken up for Christmas.

Mr Fischer said ambassadors had “praised” Mr Barnier and his negotiating team “for their resilience and steadfastness under intense pressure” during the post-Brexit talks.

And he joked that “nothing is more fun than to celebrate Christmas among socially distanced colleagues”, adding: “Thank you, Brexit! Typical 2020.”

Mr Barnier, who called Thursday “a day of relief tinged with sadness”, appeared sombre in most pictures of the event – but did let slip a few smiles.

In the UK, parliament is being recalled on 30 December – but MPs have been urged not to travel from their constituencies to London, which is in the highest band of coronavirus restrictions. Boris Johnson has said the trade deal is his Christmas present to the country – serving as “the feast” after the “oven ready deal” he promised at last year’s general election.

In a Christmas message filmed by Downing Street, the prime minister promised it would be the basis of a “happy and successful” relationship with the EU.

Details of the agreement, which runs to 1,246 pages, are still being unpicked.

The biggest effect of the deal will be that businesses will face no extra charges (tariffs) or limits on what they can export (quotas), avoiding an annual loss of around £668bn to the economy.

An 11th-hour breakthrough came on Christmas Eve, following ten months of trade talks and over four years since the UK voted to leave the EU in the 2016 referendum.

Tags: ambassadors, BREXIT, EU, gather
You may also like
Recent News:
This website uses cookies to improve your user experience and to provide you with advertisements that are relevant to your interests. By continuing to browse the site you are agreeing to our use of cookies.Ok