Brexiteer and former MEP Ben Habib has thrown his support behind a campaign from the Centre for Brexit Policy think tank for the Prime Minister to make this late move, but admits it is a “huge uphill struggle”. He tweeted: “I have just made a meaningful donation to @CentreBrexit. This Group advocates @BorisJohnson replace the WA with a sovereign compliant deal. A huge uphill struggle but their campaign deserves support.”

The Centre for Brexit Policy has suggested the Withdrawal Agreement could be replaced to ensure the UK “takes back control on exiting the transition period” – despite this ending in just over four months on December 31.

They argue “sovereignty is the crux of Brexit and the Government recognises this” as before joining the European Economic Community (EEC) and then the EU, the UK was a “truly independent state”, agreeing trading with other countries, and would be free to exit those arrangements – not subject to third-party decision-making or control.

But the think tank argues the EU is underpinned by a concept of “pooled sovereignty”, where member states give up some of their sovereignty in return for participation in the bloc’s “collective institutions”.

The Centre for Brexit Policy said in a blog post last month: “Therefore, on exiting the Transition Period (TP), it is vital that the Government ensures that no legal text interferes with the UK returning to a fully sovereign state, consistent with the status quo ante. 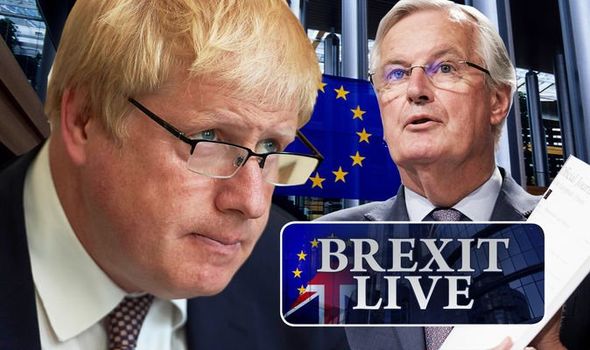 “The UK cannot be asked to concede on aspects of its sovereignty, whatever reasons the EU may concoct.”

But the think tank added: “As things currently stand, this is not the case. The current situation results from a failure in the original Withdrawal Agreement – negotiated by Theresa May – to appreciate the irreconcilable position of exiting the EU, but instead signing back into EU law without any voting power over that law.

“Although the Government sees the revised Withdrawal Agreement (WA) as only transitional until the end of the transitional period in December, there remain serious threats to UK sovereignty that will have crippling economic and strategic consequences for years to come if they are not dealt with now.

“Exiting the TP with these threats still in place is unacceptable.

“Therefore, to fulfil Brexit’s sovereign promise and take back control from the EU, the UK must ensure that any agreement negotiated is ‘sovereignty compliant’ and that the UK prepares itself for the possibility that the EU ultimately will not come to such an agreement.”

The Department for International Trade has set up 11 groups covering several areas, including investment, life sciences, and financial services, to help advise on post-Brexit trade negotiations.

The advice provided by organisations and stakeholders comprising the groups will then be used to help inform the Government’s negotiating position.

Britain is looking to intensify talks with a number of countries including Japan, the US, Australia and New Zealand, with negotiators hoping their advice will help them secure new market access on products like ceramics, cars, steel and beef, as well as agreeing cutting-edge digital trade rules.

International Trade Secretary Liz Truss said: “This is about bringing business closer to the negotiating table and using their expertise to help secure the best possible deals that deliver jobs and growth across Britain.

“Talks with Japan, the US, Australia and New Zealand are entering their crucial latter stages, so it is only right that we step up engagement with vital industries to utilise their technical and strategic expertise.

“I want business in Britain to feel engaged and informed about the work we’re doing to build an independent trade policy and how it impacts them.

“As we recover from coronavirus we want to strike deals that benefit every part of the country so we can build back better and deliver a fairer country for all.”