EU Commission president Ursula von der Leyen is facing calls to sack Phil Hogan, a senior Irish politician with significant standing in Brussels who would be deeply involved in any deal with Britain after Brexit. Ireland’s coalition Government leaders Micheal Martin and Leo Varadkar urged him to consider his position after attending a plush dinner at a hotel in the west of Ireland with more than 80 people present.

Police are investigating whether coronavirus regulations were broken in holding the Irish parliament’s golf society event two days after the Government announced it intended to prohibit indoor gatherings of more than six people.

A resurgence in COVID-19 cases in recent weeks has led Ireland to backtrack on some of its measures reopening society after lockdown.

An Irish Government statement said: “They both believe the event should never have been held, that the commissioner’s apology came late and that he still needs to give a full account and explanation of his actions.”

Mr Hogan has apologised for the “distress” his attendance at the County Galway Station House Hotel has caused. 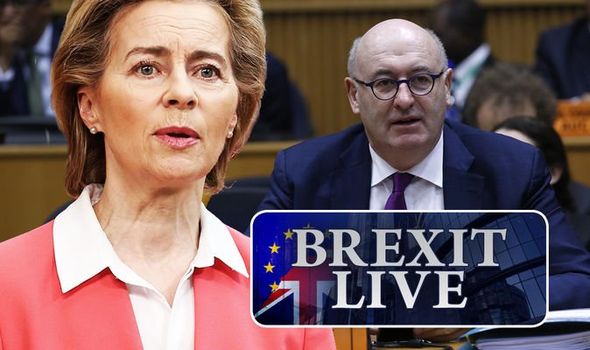 It is Ms von der Leyen who would have to force his resignation but she has so far backed Mr Hogan.

The leader of Ireland’s opposition Labour Party, Alan Kelly, said: “It is incumbent on Taoiseach Micheal Martin and Tanaiste Leo Varadkar to now inform the president of the European Commission Ursula von der Leyen that they no longer have confidence in the Irish commissioner Phil Hogan and that she should ask for his resignation pursuant to Article 17 of the Treaty on European Union.”