Jacob Rees-Mogg, the Brexit Opportunities minister, was asked on LBC by host Andrew Marr whether the “effect of Brexit has been to raise barriers” on trade and movement. The staunch Brexiteer said the UK had simply “taken control of our borders, so we now decide who comes in here,” which he insisted was a “pretty important gain from Brexit that people wanted”. This comes with Britain gripped by soaring inflation that has surged beyond nine percent – the highest in 40 years – with the cost of living crisis, soaring fuel prices and trade strikes also looming over the economy.

“The Government is tackling a global economic problem, it is an inflationary problem.”

The Brexit Opportunities minister added that a huge new trade deal could be close: “We’re reducing red tape in relation to other countries, and that’s really important. We could get a trade deal with India by the end of this year.

“That is more than a billion people. That’s a really fantastic opportunity, which we couldn’t do in the EU because he was too slow and sclerotic to get its act together and negotiate”. 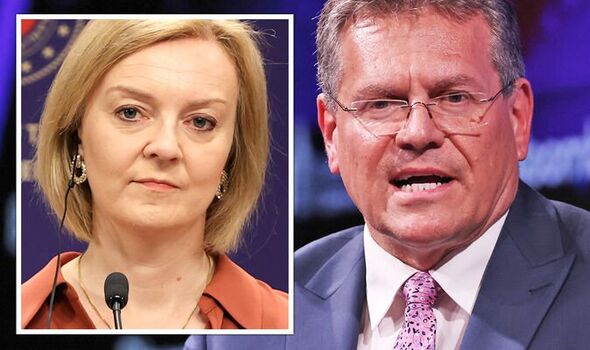 Lord Frost has called on Boris Johnson to resign as Prime Minister before he takes the Conservative Party and the Government “down with him”.

The former Brexit minister, who also served as the UK’s chief Brexit negotiator under Mr Johnson, said his place in history will be secure as “one of the past century’s most consequential Prime Ministers”.

He wrote in the Daily Telegraph: “If he leaves now, before chaos descends, that reputation is what will be remembered. If he hangs on, he risks taking the party and the Government down with him,” the former Cabinet minister said.

“That’s why it is time for him to go. If he does, he can still hand on to a new team, one that is determined to defend and seek the opportunities of Brexit, one that is able to win the next election convincingly.

“That is in the Conservative Party’s interest, in Leave voters’ interest, and in the national interest. It needs to happen.”