The UK Government yesterday made a unilateral decision to continue Irish Sea border grace periods until October yesterday. The first of the regulation schemes on goods from the rest of the UK transiting to Northern Ireland was originally due to expire at the end of this month. Supermarkets would have had to produce export health certificates for all shipments of animal products since Northern Ireland is part of the EU’s single market.

Prime Minister Boris Johnson said the aim was to protect the flow of food to Northern Irish supermarkets.

However, the EU – and the Irish Government in particular – were incensed by the move.

Taoiseach Micheal Martin said: “I am disappointed that the British Government has today announced unilateral action relating to the Protocol.

“Issues relating to the Protocol should be resolved by the UK and EU working together, through the Joint Committee. 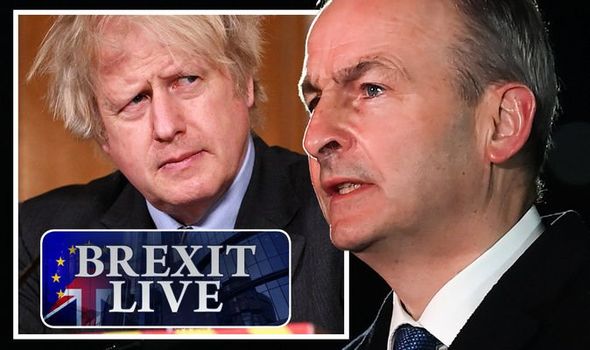 “We have worked continuously in support of efforts to find sensible means of implementing the Protocol that respond to challenges identified.

“We will continue to do so, but unilateral action undermines the trust necessary to reach agreement.

“I call on the British Government to engage urgently with the European Commission, and to work towards agreed outcomes.”

The EU even threatened legal action yesterday unless the UK backs down over Northern Ireland.

Mr Sefcovic said: “Following the UK Government’s statement today, vice-president Sefcovic has expressed the EU’s strong concerns over the UK’s unilateral action, as this amounts to a violation of the relevant substantive provisions of the protocol on Ireland/Northern Ireland and the good faith obligation under the Withdrawal Agreement.

“This is the second time that the UK Government is set to breach international law.

“This also constitutes a clear departure from the constructive approach that has prevailed up until now, thereby undermining both the work of the Joint Committee and the mutual trust necessary for solution-oriented co-operation.”

A UK Government spokesperson said: “Lord Frost explained that the measures announced, following official-level notification to the Commission earlier this week, were temporary technical steps, which largely continued measures already in place, to provide more time for businesses such as supermarkets and parcel operators to adapt to and implement the new requirements in the Protocol.”