Six years ago 52 percent of the UK voted to leave the European Union and now Lord Frost, a central figure in the negotiations, has shared his verdict. Lord Frost spoke of Brexit’s success at the annual conference of the UK in a Changing Europe organisation on Thursday.

He said “Brexit is working,” and added that those who say it is hitting the economy have “an axe to grind”.

He said: “Brexit is working. We have no cause for regrets about the decision the country has taken.

“The solutions to the remaining problems are not to be found in going backwards, but in completing the process and following through on its logic.”

The Office for Budget Responsibility predicted a four percent decline in output as a result of Brexit.

However, Lord Frost claimed these were “zombie figures” based on an academic study of the impact of opening up “badly run ex-communist and ex-authoritarian autarchic economies”. 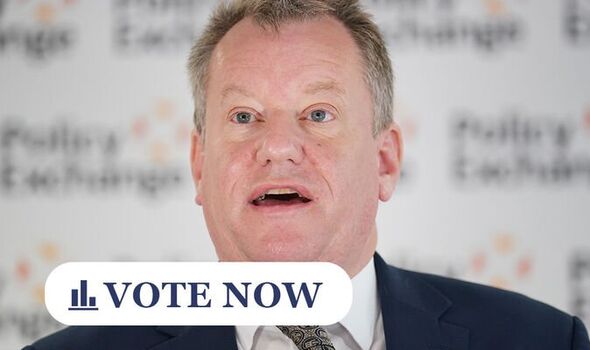 Lord Frost said: “The view that Brexit is hitting us from an economic and trade perspective is generated by those with an axe to grind and cannot be supported by any objective analysis of the figures.

“The UK has grown at much the same pace as other G7 countries since the referendum and, as the ONS points out, our goods exports to the EU are at the highest level ever.”

He added that since 2020 the forecast had been interrupted by the pandemic and war in Ukraine affecting trade and supply chains.

He explained that this means that the impact of Brexit could never be determined independently.

Lord Frost also said that the Northern Ireland Protocol remains the “biggest problem” with Brexit as the EU was refusing to look at compromises despite the sensitivities.

He said: “The delicately balanced compromise that we put in place in 2019, recognising that we were running high levels of risk in doing so, has come apart much more quickly than most of us thought.”

He suggested that the EU needed to adjust its behaviour regarding Northern Ireland and more broadly to strengthen its relationship with the UK.

On Wednesday, June 22, Lord Frost said it was up to the EU to restore relations: “Does the EU want Brexit to work?

“Can it rise above the current frictions and work with the UK as a trusted partner, or will it continue to hassle and lecture us?”

So what do YOU think? Do you agree with Lord Frost that Brexit is working? Vote in our poll and leave your thoughts in the comment section below.