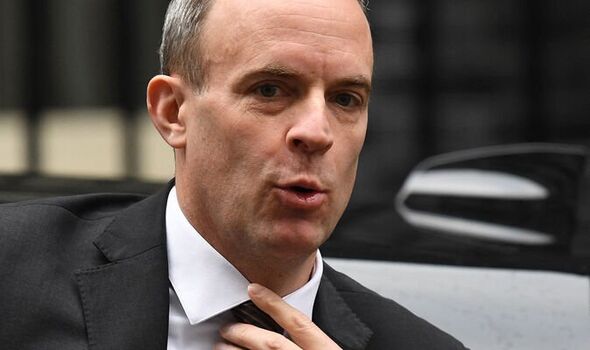 Britain could help with “witness relocation” and those found guilty of atrocities could be jailed in UK prisons.

Mr Raab has pledged to build a coalition of countries that will assist war crimes investigations, and he will offer British legal expertise and technical support to the International Criminal Court (ICC).

The moves to crack down on war criminals come as the Government investigates how it can stop Russian oligarchs using the British legal system to “intimidate and silence their critics”.

Mr Raab said: “Tomorrow I will go to The Hague to offer the ICC UK technical support in bringing those responsible for war crimes in Ukraine to justice – including support with the immediate priority of gathering and preserving evidence. Russian commanders carrying out war crimes should know they cannot act with impunity.

“Like Radovan Karadzic and Charles Taylor before them, their actions risk landing them in a jail cell.”

Mr Raab will also meet ambassadors to discuss ways of helping the Office of the Prosecutor investigate war crimes in Ukraine.

Britain was a founder member of the ICC and will offer to provide police and military analysis and legal expertise as well as specialist IT support to collect and preserve evidence.

Mr Raab served as the foreign office’s head of war crimes in the British Embassy in the Hague, liaising with the ICC from 2003 until 2006. He negotiated agreements that allowed for witnesses to be relocated to safety in the UK and for those convicted to serve their sentences in UK prisons; in May last year it was announced that former Bosnian Serb leader Radovan Karadžić, who was convicted of genocide, would spend the rest of his life sentence in a British jail.

The justice secretary is also leading a taskforce which includes ministers, senior civil servants, the police and the Crown Prosecution Service which is exploring how best Britain can support the ICC’s prosecution of war crimes in Ukraine.