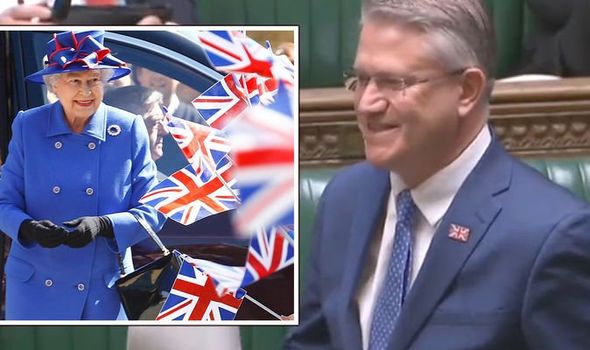 In the Commons, Culture Minister Chris Philp told MPs: “The more we hear the National Anthem sung, frankly, the better.” He spoke out after Tory backbencher Andrew Rosindell raised the issue at Culture and Media Questions.

“I know the minister will agree that the singing of the national anthem is something that provides a great sense of unity and pride in our nation. So in this year of the Queen’s Platinum Jubilee, will the minister take steps to encourage public broadcasters to play the National Anthem and ensure the BBC restores it at the end of the day’s programming before it switches to News 24?” Mr Rosindell said.

Culture Secretary Nadine Dorries was overheard saying “fantastic question” after Mr Rosindell finished speaking. Her frontbench colleague Mr Philp added: “We fully support the signing of the National Anthem, Her Majesty the Queen and other expressions of patriotism – including the flying of the Union Jack. The more that we hear the National Anthem sung, frankly, the better. Organisations like schools are free to promote it and the more we can do in this area, the better it’ll be.”

Following the exchange, Mr Rosindell told the Daily Express he was “very pleased” with the response to his question from the Government frontbench. “They were fully behind the singing of the National Anthem and want to encourage it,” he said.

Mr Rosindell, the MPs for Romford, called for the BBC to restore the past practice of playing the National Anthem at the end of its programming each evening.

“It always used to be played at end of the day and I think that, for the Queen’s Jubilee, they should restore that tradition. The fact that there is 24-hour news now doesn’t mean there is no end to BBC One programming; it could be during the switchover. It can be done and I think they should restore that by February 6, the day the Queen’s Jubilee starts.

“Secondly, we need to ensure that schools are singing the National Anthem with children in assembly at least once a week. It overrides any kind of diversity; if we’re all British and we all have the same sovereign and we all love our country, other differences become less important. It brings unity and strength. It is long overdue that that becomes a daily or weekly part of what the school does to teach children about pride, patriotism and love of country and understanding how the Monarchy brings all British people together.

Mr Rosindell has raised the issue of singing the anthem in schools with the Department for Education many times over a number of years and intends to do so again. “I think it’s extremely important that we do this and there could not be a better year than that of the Queen’s Platinum Jubilee,” he added.

A source close to Ms Dorries said the Culture Secretary was “not mandating the BBC to play the National Anthem.”

A BBC spokesperson said: “The National Anthem is played every night on Radio Four after the late shipping forecast and we continue to play it at appropriate times on television, such as during the Queen’s Christmas broadcast. We no longer play the National Anthem on a daily basis on BBC One because it doesn’t close down in the evening.”