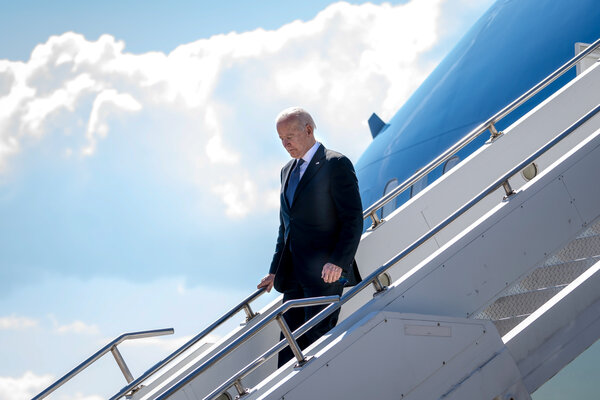 President Biden’s meeting on Wednesday with President Vladimir V. Putin of Russia will be tense and tightly choreographed, with no planned “breaking of bread” — underscoring a sharp departure from the chummy, unscripted, unsupervised interactions between Mr. Putin and President Donald J. Trump.

One of the main topics of the meeting in Geneva will be the future of the New Start treaty, which limits the United States and Russia to 1,550 deployed nuclear missiles each, according to a senior administration official who briefed reporters on the flight from Brussels.

Mr. Biden plans to confront Mr. Putin, who he has called a killer, about recent ransomware attacks on U.S. companies and government agencies, and he will demand that Moscow stop harboring criminal hacking groups operating on Russian soil. He will also outline responses if state-directed or private hacks emanating from Russia continue, the official said.

Mr. Biden is also likely to raise the issue of the detention of Aleksei A. Navalny, the ailing opposition leader.

“Nothing is off the table,” said the official, who cautioned that the White House was “not expecting a big set of deliverables” from the meeting.

It will be not for a lack of face time. The meeting, which will take place at the Villa La Grange, a sprawling 18th-century chateau set on the shore of Lake Geneva, is expected to last four or five hours, and maybe longer.

The event Wednesday is expected to begin at 1 p.m. local time with both men greeting President Guy Parmelin of Switzerland, followed by a smaller meeting between Mr. Biden, Mr. Putin, Secretary of State Antony J. Blinken and his Russian counterpart, Sergey V. Lavrov, along with translators.

The group then expands to include other aides, although the size and duration of the session will be determined by events. Reporters and photographers will be allowed in at the top of the meeting, then ushered out when the principals get down to business.

No meals are planned, so there will be “no breaking of bread,” the official said.

Mr. Biden’s detailed itinerary — or even the existence of a detailed public schedule at all — marks a contrast from Mr. Trump’s unscripted conversations with Mr. Putin, which included a lengthy chat with the Russian leader in Hamburg in 2017, which was not disclosed until after the fact.

On Monday, Mr. Biden set a sober tone for the meeting, warning Mr. Putin that the death of Mr. Navalny, one of the Russian president’s most outspoken opponents, would hobble Russia’s already strained relationships with world leaders.

“Navalny’s death would be another indication that Russia has little or no intention of abiding by basic fundamental human rights,” Mr. Biden said at a news conference following the NATO summit.

“It would be a tragedy,” he added. “It would do nothing but hurt his relationships with the rest of the world, in my view, and with me.”